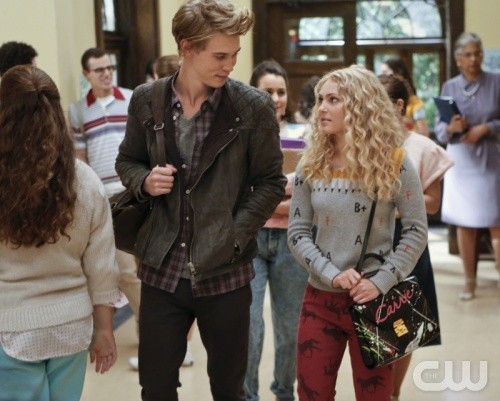 Tonight on the CW the new show THE CARRIE DIARIES returns with a new episode called, “Lie With Me.”  The Carrie Diaries is the prequel to the popular Sex and The City series and follows a 16-year-old Carrie Bradshaw and her life.  On last week’s pilot episode as Carrie began the first day of her junior year, she couldn’t help but feel as though all eyes were on her, and a pity party from rival Donna LaDonna didn’t help the situation.

Even when surrounded by her group of friends, Mouse, Maggie and Walt, Carrie felt as though her life should be heading in a different direction. The arrival of new guy Sebastian Kydd brough Carrie some excitement, but it wasn’t until she accepted an internship at a Manhattan law firm that things began to fall into place.  Did you watch last week’s premiere episode?  We did and we recapped it here for you!

On tonight’s show new couple Carrie (AnnaSophia Robb) and Sebastian (Austin Butler) can’t seem to catch a break. Between being grounded and rival Donna’s (Chloe Bridges) sneaky attempts to break them apart, Carrie worries Sebastian will lose interest in her. Desperate for some alone time with him, Carrie must lie to her father (Matt Letscher) and bail on plans with her sister Doritt (Stefania Owen.) Maggie’s (Katie Findlay) obsession with having sex drives a wedge between her and Walt (Brenden Dooling.) Meanwhile, Larissa (Freema Agyman) wants to do a photo shoot with Carrie’s purse for Interview magazine forcing Carrie to scramble to make it work. Ellen Wong also stars. Alfonso Gomez-Rejon directed the episode written by Amy B. Harris.

Tonight’s episode is going to be great and you won’t want to miss it or AnnaSophia Robb as a young Carrie Bradshaw. So be sure to tune in for our live coverage of the CW’s The Carrie Diaries tonight at 8 PM EST! While you wait for our recap, hit the comments and let us know if you think a prequel to Sex & The City will work?

This week both Carrie and Dorrit are still grounded and are discovering something that they had forgotten ever since their mom died- they really like each other. Sebastian tried to Carrie to sneak out but she was afraid to get caught so he went to dinner at a fancy place with his family. Of course Carrie’s rival, Donna LaDonna was there and clearly is angling for time alone with Sebastian. Meanwhile in a complete role reversal, Maggie is still pressuring Walt to have sex and he is still dodging her advances as if they were rapid fire bullets. On Monday morning Donna strolls in wearing Sebastian’s suit coat from dinner. She makes sure to give it to him in front of Carrie.

Sebastian pulls Carrie aside and comes clean. He tells her he hung out with Donna at the Country Club but other than sharing some pot, nothing happened. Maggie also confides in Carrie and tells her that after 2 years of dating Walt refuses to have sex with her.

Carrie is spending her day in the city when she finds out that Larissa had left her three messages at the law firm. Carrie calls her and finds out that her special purse is needed for a photo shoot to be featured in Interview magazine but she has to lie to get herself out of the office first. Before Carrie can get out the door her phone rings and it is Sebastian who invites her to a Blue Oyster Cult concert this coming Saturday. She then rushes downtown for the rooftop and Larissa gifts her with her very first Dior scarf.

Carrie gets back to the office and in spite of being 90 minutes late she managed to fake confidence and talk her way out of getting fired. While Carrie is in the city Donna is at school trying to sink her claws into Sebastian. Mouse sees them together and tells Carrie to step it up with Sebastian because Donna is pulling out all the stops.  Carrie goes up to Sebastien the next day and suggests he meet her at the pool. The only problem is that she was also meeting Dorrit.  Carrie explains to Dorrit the situation and her younger sister says she understands but obviously isn’t okay. She goes home and locks herself in her room. Carrie’s father realizes something is wrong and heads to the pool to see Carrie. He catches her lip locked with Sebastien.

Walt spends 4 hours waiting for Maggie and realizes that he’s not in love with her.  He suggests they break up and it was tough but he was finally being honest. Carrie’s father allows her to be off her grounding but insists that she can’t see Sebastien. He says he knows the kids family and they’re trouble. Carrie has no idea how to stay away from the cutest boy in school. Carrie makes up with Dorrit and the girls decide to stay in and watch a bootleg copy of Purple Rain. Sebastian knocks on the door and Carrie blows him off in favor of her night with Dorrit.

Carrie, Mouse and Dorrit are hanging out when Maggie lets herself in. The girls huddle as Mags tells them about the breakup and then they slam dudes while making peanut butter and jelly crackers in the kitchen. Tune in next week for more of Carrie!