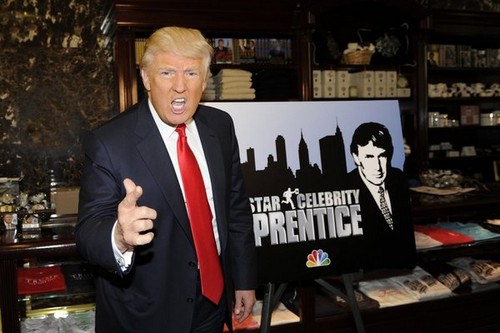 Tonight my favorite show THE CELEBRITY APPRENTICE returns with a whole new episode called, “One of Us Will Win, But Not Be Much.” On this week’s show live from New York City, Donald Trump crowns the first All-Star Celebrity winner. Did you watch last week’s episode? We did and we recapped it here for you.

On last week’s show the All-Stars Mr. Trump fired two contestants before the finalists are challenged to take on their biggest task yet. They must create a new flavor of Walgreens Delish brand premium ice cream, produce a promotional video, and raise money for a launch event featuring the new flavors. With six fired All-Stars returning to help them, the two finalists had to rely on everything they’ve learned to win the ultimate prize – $250,000 for their charity and the title of All-Star Celebrity Apprentice. With time running out, one finalist can’t edit their video down to time, while the other finalist had trouble finding donors for the launch event. Boardroom Advisors: Joan Rivers and Ivanka Trump.

The show airs tonight at 9PM and you do not want to miss all the drama, cat fights and bitching. You also do not want to miss seeing who is fired and who is crowned the winner. So don’t forget to come back to this spot for our live recap of the Celebrity Apprentice All-Stars Finale. While you wait for our recap let us know how you are enjoying this season of The Apprentice.

Donald Trump is rounding out what’s happening with his current contestants. The wind is providing some laughs with what it’s doing to Donald’s hair. Live from NYC, it’s the finale.

Since the beginning of the hit show it’s raised over 13 million dollars for charity. Now it’s down to two contenders, Penn Jillette and Trace Adkins, to win 250,000 towards their charity and to be the first All-Star Celebrity Apprentice.

Penn has to cut down his commercial to sixty seconds but he can’t get his grand idea down to a minimum, Lisa Rinna suggests they cut out Dennis Rodman. At first Penn was nervous but he realized a way to keep the magic.

Donald takes some time during the live show to thank his advisors and family; his kids and Joan Rivers.

Team Penn are in the car heading to the launch party. LaToya and Lisa are encouraging Penn meanwhile Dennis, who also happens to be in the car, remains silent. When they get to the venue they girls take charge to decorate.

Trace got some good news. Tim Teabow is coming and he’s bringing 200,000 with him. But one possible problem. Trace doesn’t know if Tim can make it before 6:30. Trace’s event is hitched on Gary Busy of all people. Lil John and Trace are nervous about Gary but he seems to be focused.

Donald welcomes back the past contenders. Omarosa shows up in a floor length gown. Stephen Baldwin apologizes for all the things he said about Donald. Omarosa claims she’s in a right place with everyone. Although she’s not friendly with Cladia when she tries to cut her off.

Penn and Teller do one of their magic tricks during the live show much to the amusement of the audience.

It’s time for their event. The money is coming in very well for Penn. Team Trace isn’t pullin in the same numbers as Penn but people are coming in for him. Smaller number of people but very big donors. The celebs are lining up.

Tim Teabow isn’t there yet. Trace wants to give up but Marilu keeps trying to convince to wait for Tim. Tim manages to show up on time. Trace thinks he has enough now.

The rest of the fired contenders come out to the stage. Dennis is trying to work a gingantic blonde Mohawk with purple eye shadow. He touches on his friend the dictator a little before conversation moves on.

Back to the event, Donald and his family attend. Trace’s ice cream is doing well and now its time for the entertainment. Penn’s commercial goes down well and he later brings up his team and shows how the magic trick actually worked.

Now it’s Trace’s turn. His commercial got in some laughs before Trace takes the stage to perform. He gives a good performance but it’s when Gary goes up onstage to perform that everyone takes out there cell to take video. All that’s left is to count up the cash flow.

The DeLish people each gave their pros and cons. Nothing too drastic in their cons. In their pros, Trace comes out ahead.

Penn raised over 506,000 and Trace raised 554,000. Donald asked the teams who haven’t raised a lot of money for their respective charities and whoever came in short received 20,000 from Donald personally.

Wallgreens is giving an extra 100,000 to whom they believe did the better job. Penn is deemed the winner in that competition now they just have to wait to see who won the entire competition.

Donald goes over footage over the last season. LaToya and Omarosa nearly comes to blows with Donald unable to stop them and Gary laughably standing between them. They aren’t friends and will never be friendly.

Donald asked the past contestants who should win. No one wants to pick one over the other unless pushed but Donald is really dragging out the results.

Trace and Penn perform together. These two have grown close and they respect each other nonetheless only one can win?

Surprisingly enough Lil John gets a standing ovation for his recognition.

Finally the winner is Trace Adkins!!!!!!!!! Drop the confetti.