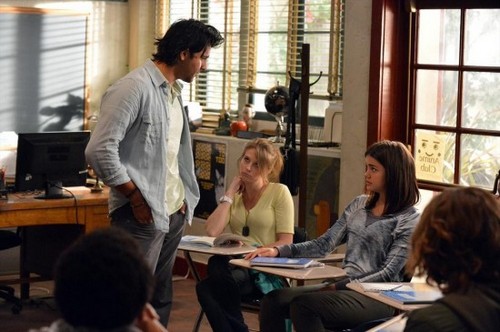 ABC Families new drama, THE FOSTERS returns tonight with its third episode called, “Hostile Acts.”  On tonight’s show Mike asks Brandon to move in with him and Mariana makes it clear that she does not want Jesus to date Lexi.

If you have never watched the show it it about a multi-ethnic family mix of foster and biological kids being raised by two moms. Stef Foster (Teri Polo), a dedicated police officer, and her partner Lena Adams (Sherri Saum), a school Vice Principal, have built a close-knit, loving family with Stef’s biological son from a previous marriage, Brandon (David Lambert), and their adopted twins, Mariana (Cierra Ramirez) and Jesus (Jake T. Austin).

Their lives are disrupted in unexpected ways when Lena meets Callie (Maia Mitchell), a hardened teen with an abusive past who has spent her life in and out of foster homes. Lena and Stef warily welcome Callie into their home thinking it’s just for a few weeks, until a more permanent placement can be found.

On tonight’s show Mariana disapproves of Jesus and Lexi’s relationship; a school assignment causes Callie to revisit her own dark secrets. Mike asks Brandon to move in with him.

Tonight’s season 1 episode 3 is going to be an exciting one that you won’t want to miss, so be sure to tune in for our live coverage of ABC Family’s The Fosters tonight at 9 PM EST! While you wait for our recap hit the comments and let us know what you think of The Fosters season 1 this year. Check out the sneak peek video of tonight’s show below, while you wait for the recap!

The Foster’s are a multiracial blended family and on tonight’s episode the problems of several teens living beneath the same roof are all hitting the fan at once. Jesus seems to really like Lexi and is looking for reasons to talk to her. The big problem there is that his sister Mariana is good friends with Lexi and she forbids him from stealing her away.

Brandon talks to his father, Mike and is offered the opportunity to leave the over crowded house to go and live with him. Brandon tells Stefi about the offer and they end up having a huge fight over it. Brandon storms out after saying that he hates having two moms. He later returns and Stefi says that since he’s 16 he can chose which parent he lives with.

Callie and Jude are the newest family members and she talks to Brandon and asks him if he’s leaving because of them. Of course he says no. After that conversation Lexi talks to Jesus and tries to convince him that it’s okay for him to like his sisters’ best friend. He runs off in disagreement.

Callie’s writing teacher asks her to stay after class because she’s struggling with an assignment. He tells her to think of one situation that she regrets, something that still eats away at her and then write about it. Callie titles it one word- Liam. Then begins writing like crazy.

Brandon goes to Mike’s for dinner and seems to like bonding with him. When Mike suggests taking Brandon home his son wants to stay awhile longer. When he returns home the whole family has just started playing a board game. He kinda bursts right in and informs them that he wants to live with his dad. Stef excuses herself to make tea, obviously upset.

As Brandon is getting ready to pack up Jesus decides to come clean and tell him that Mariana sold the pills to help their birth mother. Jesus took the fall because he had prevented her from telling the truth in the first place. Meanwhile Mariana appears to have snuck a glimpse at Callie’s journal and Callie tells Lena that she doesn’t know her daughter at all.

Jesus spots Lexi walking alone and you can tell by the look on both of their faces that they are done trying to stay apart. A long kiss follows the stare down. Jude had to get a 65 on his 7th grade test in order to stay in the school. He hands the test into Lena and she marks most everything wrong but gives him that 65.

Brandon changes his mind about moving again and now decides to stay with his moms. Mike had rented a piano for Brandon to practice on and he tells him to come any time to play it. The episode ends with the whole family sitting down to watch a movie. Tune in next week for more of The Fosters.