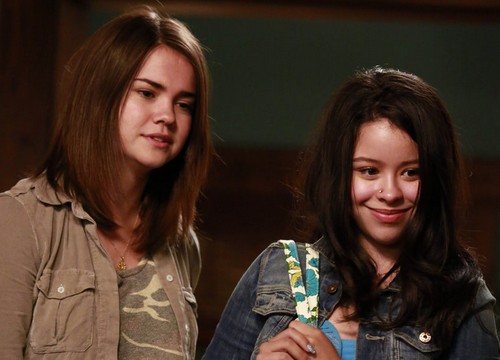 ABC Families new drama, THE FOSTERS returns tonight with its sixth episode called, “The Fallout.” On tonight’s show Callie is conflicted but she opens up to Brandon, who supports her as she confronts a painful memory from her past. Did you watch last week’s episode? We did and we recapped it here for you.

On last week’s show Stef and Lena invited Lexi Rivera’s very protective, Catholic parents to dinner.  Meanwhile, Callie got closer to Wyatt but Brandon had serious reservations about Callie dating a “bad boy.” Stef and Lena learn that two of their close friends, Kelly and Jenna, were having major relationship trouble and it caused them to look at the lack of romance in their own lives. Kelly and Jenna’s hip and educated son, Garret, caught Mariana’s eye and she becames desperate to fit in with his cool, edgy crowd. Jude was bullied at school for being different.

On tonight’s show Jesus and Mariana face off over recent betrayals.  Feeling betrayed and angry, Jesus and Mariana get into a major fight. When Lexi’s parents take measures to keep her away from Jesus, Lexi makes a desperate decision, which could have serious and lasting consequences for her and her family. Meanwhile, Lena urges Callie to participate during her weekly group therapy sessions. Callie is conflicted but she opens up to Brandon, who supports her as she confronts a painful memory from her past. Jude hopes to impress his new friend Connor, who comes over to work on a school project. Jeff Melman directed the episode written by Bradley Bredeweg, Peter Paige and Zoila Amelia Galeano.

Tonight’s season 1 episode 7 is going to be an exciting one that you won’t want to miss, so be sure to tune in for our live coverage of ABC Family’s The Fosters tonight at 9 PM EST! While you wait for our recap hit the comments and let us know what you think of The Fosters season 1 this year. Check out the sneak peek video of tonight’s show below, while you wait for the recap!

Tonight’s episode of The Fosters begins exactly where it ended last week with Lexi’s parent’s freaking out after learning that Lena and Stef gave her The Morning After Pill. They have decided to pull her out of school and to send her away to a boarding school which causes Jesus to blow up. He blasts Mariana for spilling the beans out of pure jealousy because now both of them will lose Lexi.

Wyatt tries to get Calli to tell him about Liam but she insists there’s nothing to tell. Wyatt sends Liam a threatening message and so Liam pulls up near Calli at school and jumps out of his jeep screaming at her to keep her boyfriend out of his way. He grabs Calli by the arm clearly hurting her and Wyatt appears out of nowhere and knocks Liam over. Brandon also jumps in to break up the fight. He walks home with Calli and puts together the pieces that Liam abused Calli when he was her foster brother. Calli tells him that a young girl is now a foster kid in his home.

Kena’s job at the school is on the line because Stef gave Lexi the Morning After Pill but Stef doesn’t get that she crossed lines. It’s causing a huge blow out between them. Stef volunteers to talk to the family but Lena insists that it’s a bad idea. Jesus tries to reason with Lexi’s dad but that doesn’t work either.

The next morning there is a knock at the door and it’s Lexi’s parents. She ran away and they assumed she was hiding out with Jesus.  The parents split up with Lena and Stef both try to work their magic with the parent that’s with them. Jude has finally made a friend named Connor at school. Connor seems to be a lot like Jude and has accepted his girlishness. Connor and Jude are meeting at the house to work on a project.

Meanwhile Mariana receives a text from “Ana” and quickly runs out to meet up with her. She eventually sneaks into a house, finds her way upstairs and there Lexi is waiting for her. She brings her food and stuff and Lexi is hoping that if she hides out and misses her flight then her parents will realize  that she needs to stay home and not be sent away. It’s obvious that they have patched up their friendship for real.

Meanwhile Connor is learning more about Jude and his history of hopping from foster home to foster home. They are bonding and Connor seems to care an awful lot about Jude.

When Stef suggests going to the police the Riveras admit that they are illegal’s and that’s why they haven’t gone to the police yet. Jesus and Mariana run to get Lexi to come home. Calli is at her weekly foster kid meeting and after trying to talk to Sara alone fails she opens up to the group and starts to talk about Liam’s abuse until Sara runs out. Brandon is waiting outside as Sara runs off. Calli tells him that Liam raped her a few years ago and that she had blamed herself and she hates seeing Sara in the same position.

As it turns out Lexi has the upper hand. She tells her parents that if they send her away she’ll call immigration on them herself. Tune in next week for more of The Fosters!