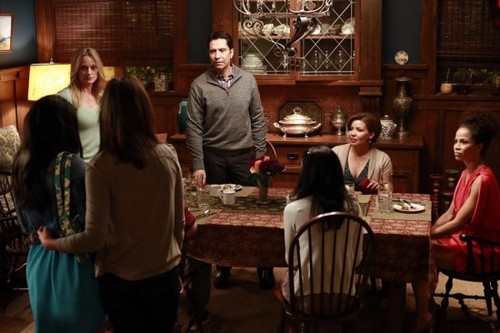 ABC Families new drama, THE FOSTERS returns tonight with its sixth episode called, “Saturday.” On tonight’s show when things between Jesus and Lexi get hot and heavy, they are forced to face the possible consequences of their actions. Did you watch last week’s episode? We did and we recapped it here for you.

On last week’s show passion took Jesus and Lexi by surprise.  Lust was is in the air on an all new episode of “The Fosters” when Jesus and Lexi get caught up in the moment and took things further than they were prepared to.

On tonight’s show Stef and Lena invite Lexi Rivera’s very protective, Catholic parents to dinner.  Meanwhile, Callie gets closer to Wyatt but Brandon has serious reservations about Callie dating a “bad boy.” Stef and Lena learn that two of their close friends, Kelly and Jenna, are having major relationship trouble and it causes them to look at the lack of romance in their own lives. Kelly and Jenna’s hip and educated son, Garret (played by real life slam poet Noah St. John), catches Mariana’s eye and she becomes desperate to fit in with his cool, edgy crowd. Jude is bullied at school for being different.

Tonight’s season 1 episode 6 is going to be an exciting one that you won’t want to miss, so be sure to tune in for our live coverage of ABC Family’s The Fosters tonight at 9 PM EST! While you wait for our recap hit the comments and let us know what you think of The Fosters season 1 this year. Check out the sneak peek video of tonight’s show below, while you wait for the recap!

It looks like tonight’s episode of The Foster’s is going to be jam packed with drama right off the bat. Wyatt and Calli continue to heat up and he considers himself the girl in the relationship because he is trying to figure out what they are exactly. She has to go to a meeting for foster kids and starts to bond with a girl that she meets there. The girl is some how connected to Liam though and once Calli drops his name the girl makes a quick exit.

Brandon has been practicing his piano constantly and he has a huge audition to get into a big school. Mike shows up late to take him to the audition, claiming he was asleep. Meanwhile Stef visits her dad to bring him groceries and they clash over her being gay. He still doesn’t understand why she chose to leave a good life to be gay.

Mariana meets up with her birth mom on the sly again and she gets a belated birthday gift, a stuffed animal. She wants to go with Calli to Wyatt’s party. It might be a first step towards them being friends. Jesus has convinced Lena and Stef to invite Lexi’s parents over for dinner. He wants them to allow him to go to Christian camp with Lexi but Stef is expecting the Catholic parents to judge them.

Calli and Mariana get to the party and Wyatt has everyone purposely vandalizing the place.  He totally freaks out and starts demolishing the place with an axe. Calli stops him briefly with a kiss and seems to reassure him it’ll be okay. Meanwhile Mariana hears from a girl that Lexi and Jesus had sex and she freaks out and chugs her drink. Calli finds her and wants to take her home but Mariana ditches her. As Calli is taking pictures she spots Liam at the bottom of a staircase.

Brandon screws up his audition and Mike takes the blame. He gets Brandon a second shot and his second audition goes well. The teacher offers to take him on as a student. Meanwhile Lena and Stefs dinner with Lexi’s parents would be going extremely well if not for Stef’s father showing up. They have no problem with their family values but her dad does and he ruins dinner with his religious banter.

Mariana comes home and completely dimes out Lexi and Jesus. She doesn’t understand how all the parents can let them go to “Jesus Camp” together when they’re already having sex. Tune in next week for more of The Foster’s.