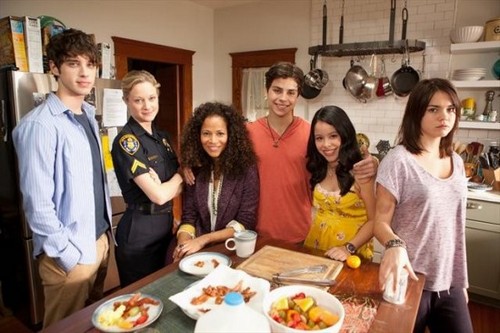 ABC Families new drama, THE FOSTERS returns tonight with its forth episode called, “The Morning After.”  On tonight’s show Jesus and Lexi get caught up in the moment and take things further than they’re prepared to.  Did you watch last week’s episode?  We did and we recapped it here for you.

On last week’s show Mariana prepared for her Quinceañera but made a discovery that could ruin her day and Lena’s mother came to town.  Lena wanted to throw Mariana the perfect Quinces party, while Stef balked at the cost of the event. Prompted by her moms, Mariana inviting Callie to be in her court and Callie awkwardly accepted.  Stef noticed tension between Brandon and Talya over Callie and reminded Brandon that it’s against the rules for foster siblings to have romantic relationships.

On tonight’s episode Passion takes Jesus and Lexi by surprise.  Lust is in the air on an all new episode of “The Fosters” when Jesus and Lexi get caught up in the moment and take things further than they’re prepared to

Tonight’s season 1 episode 5 is going to be an exciting one that you won’t want to miss, so be sure to tune in for our live coverage of ABC Family’s The Fosters tonight at 9 PM EST! While you wait for our recap hit the comments and let us know what you think of The Fosters season 1 this year. Check out the sneak peek video of tonight’s show below, while you wait for the recap!

Click Here To Refresh For Updates Of The Live Recap!

Lust seems to definitely be the under current of tonight’s episode of The Fosters. Lena and Stef host a party that includes all of their lesbian friends. Wyatt is also there because Callie invited him. Brandon warns her that Wyatt has been known to use girls but Callie doesn’t seem to care much.

Lena and Stef have friends that haven’t had sex in a year and it makes them take stock of things. They both grab their smart phones to try and schedule a date that fits around their schedules. Meanwhile Jesus and Lexi are really heating up in a bedroom. When he suggests taking a break from the heavy make out session she suggests he keep going.  Of course after the fact Lexi stresses about maybe being pregnant.

Mariana encourages Jude’s girly side by painting his nails for him. He wears the nail polish to school though and instantly gets made fun of.  Stef over hears Lexi and Jesus and realizes that they had sex. Stef talks to Lena about getting a Plan B pill for Lexi. I’m all for social issues being worked into television but I feel like this show tries to shove everything down our throats at once.

Callie finds out that Jude was beat up over the nail polish and she tells him to take it off. She explains to Lena that while the house is a safe zone not everywhere else and that he needs to understand that. Lena later talks to Jude and explains that being different isn’t wrong but people who make you feel unsafe for it are wrong.

Callie decides to spend time with Wyatt after finding out that he doesn’t use girls. He takes her to his beach house that his parents never use. Well at least that’s what he told her but the truth is it’s not even his house.

Callie ends up calling Brandon to bail them out of trouble and Brandon later explains that he doesn’t want to see her dating anyone at all. She explains that two years ago she hooked up with the son of a foster mother and she and Jude were removed the minute the lady found out. She doesn’t want history to repeat itself.  Lexi is freaking out wanting the morning after pill.

Jude goes to school the day after talking to Lena and he sits down to lunch alone but not for long. Along comes another kid and his nails are painted blue. Mariana is semi-desperate to get Garrett’s attention She goes to a poetry slam but doesn’t get called back. She tries to sit out the next slam but Garrett makes it clear that he wants Mariana there.

Lexi goes to the office and thanks Lena for getting her the pill but it’s pretty obvious Lena wasn’t in on that at all. Lena confronts Stef  but seems unsure about whether or not she is angry. The whole family goes to the slam and Garrett presents a thing about his two moms that is impossible to describe here. It was wonderfully written and his presentation was bang on. Tonight’s show ends with Stef and Lena making out in the car. Tune in next week for more of The Fosters.