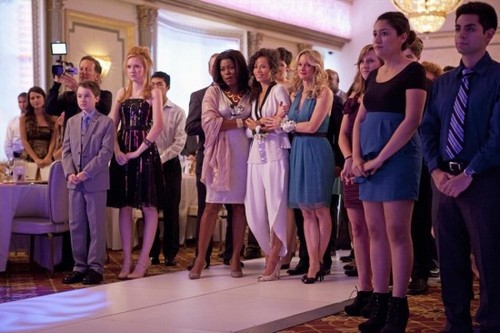 ABC Families new drama, THE FOSTERS returns tonight with its forth episode called, “Quinceañera.”  On tonight’s show Lena’s mother comes to town.  Did you watch last week’s episode?  We did and we recapped it here for you.

On tonight’s show Mariana disapproved of Jesus and Lexi’s relationship; a school assignment caused Callie to revisit her own dark secrets. Mike asked Brandon to move in with him.

Mariana prepares for her Quinceañera but makes a discovery that could ruin her day and Lena’s mother comes to town.  ena wants to throw Mariana the perfect Quinces party, while Stef balks at the cost of the event. Prompted by her moms, Mariana invites Callie to be in her court and Callie awkwardly accepts.  Stef notices tension between Brandon and Talya over Callie and reminds Brandon that it’s against the rules for foster siblings to have romantic relationships.

Tonight’s season 1 episode 4 is going to be an exciting one that you won’t want to miss, so be sure to tune in for our live coverage of ABC Family’s The Fosters tonight at 9 PM EST! While you wait for our recap hit the comments and let us know what you think of The Fosters season 1 this year. Check out the sneak peek video of tonight’s show below, while you wait for the recap!

Recap Here – Click To Refresh For More As We Update

Mariana’s Quincenera is quickly approaching and Lena is afraid that she is embarrassed to dance with her moms together. They pressured Mariana to ask Callie to be in her court but once they are alone, Callie tells her that she’ll not accept the invite if it makes her feel better. Mariana seems to be coming around and says it’s fine with her if Callie is in her court.

Lexi and Jesus are still sneaking around with their relationship. She wants to wait until after Mariana’s party to tell her that she’s dating her brother but I suspect they’ll get caught before that. Meanwhile Stef asks Mariana if she is nervous about dancing with her moms together and Mariana’s look shows that she is certainly not comfortable with it.

Mariana’s court has to waltz for the party so Brandon and Callie are learning how to do it. It’s more than a little awkward to watch them inch closer towards each other. When the time for Mariana’s party finally comes Lexi gives her a photo collage of all their special BFF moments while Callie quietly looks on.  Lena also gives her a special gift- a tiara. After Mariana puts it on her head she catches Jesus kissing Lexi and looks horrified.

When it’s time to waltz, in between the dance moves the couples are feuding. Mariana wants to know why her brother is kissing her BFF and Callie is trying to distance herself from Brandon. It’s messy at best. Mariana feels like she has been betrayed and Lexi is insisting that they didn’t tell her so that her feelings wouldn’t be hurt.

Lena sits down at the party and has a serious chat with her mother. Mom insists that Lena has had a relatively easy life because she’s biracial. She’ll never know the difficulties of being a black woman in today’s society. Lena insists that being biracial has actually made it harder for her. Lena tells Stef who attempts to make her feels better, to know avail.

The moms have a slide show featuring Mariana and they roll out her cake. Meanwhile Brandon tells Callie that he dumped Talia. Mainly because he hates the things that she has done to Callie. She runs off before he can say anymore and Brandon ends up driving his dad home.

Mariana apologizes to her moms for not dancing with them and off in another corner Jesus tells Lexi he’s not leaving without a dance together. The show ends with Mariana dancing with her moms. Tune in next week for more of The Foster’s.