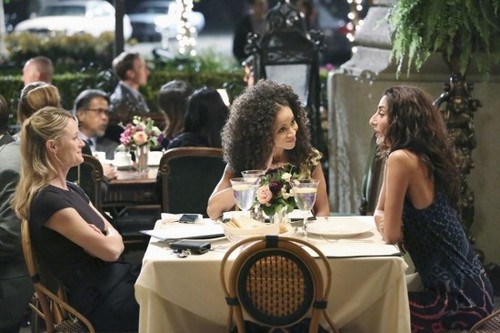 ABC Families new drama, THE FOSTERS returns tonight with its sixth episode called, “Clean.” On tonight’s show Mariana takes Jesus to see Ana, and Lena’s beautiful ex-girlfriend arrives in town for a visit. Did you watch last week’s episode? We did and we recapped it here for you.

On last week’s show Jesus and Mariana faced off over recent betrayals.  Feeling betrayed and angry, Jesus and Mariana got into a major fight. When Lexi’s parents took measures to keep her away from Jesus, Lexi makes a desperate decision, which could have serious and lasting consequences for her and her family. Meanwhile, Lena urged Callie to participate during her weekly group therapy sessions. Callie was conflicted but she opened up to Brandon, who supported her as she confronted a painful memory from her past. Jude hoped to impress his new friend Connor, who came over to work on a school project.

On tonight’s show Brandon struggles to please his demanding new piano teacher and rebuffs an offer from Talya to reconnect.  When an embarrassing video of Talya circulates around the school, Callie lends her support and urges Brandon to cut her some slack.  The encounter with his birth mom and her desperate situation drive Jesus to take matters into his own hands, a move that could have dire consequences for the whole family.

Tonight’s season 1 episode 8 is going to be an exciting one that you won’t want to miss, so be sure to tune in for our live coverage of ABC Family’s The Fosters tonight at 9 PM EST! While you wait for our recap hit the comments and let us know what you think of The Fosters season 1 this year. Check out the sneak peek video of tonight’s show below, while you wait for the recap!

Several huge problems are swirling on tonight’s episode of the Foster’s. Callie blew Wyatt off last week and her insisting on remaining secretive may push him away for good. He tells her that she may just be too weird for him. Mariana takes Jesus with her to visit their mother who of course is looking for cash. They both insist that they have no money to give her and refuse to steal from the house for her either,

Stef realizes that her ex Mike has been drinking again. Apparently his boozing ruined their marriage and thanks to his recent behavior he is now on desk duty rather than patrolling. Talya tries to win Brandon back over with a pair of tickets to see his favorite band but he is having none of it. He is obviously smitten with Callie. Ironically when some kids in class rig a projector to show a video of Talya stripping it’s Callie that offers her support. She knows what it’s like to have people whispering about you as you walk by. She tells her that it’ll pass and she also suggests that Brandon support his ex.

Stef and Lena meet up with Lena’s ex for dinner. The situation turns totally awkward when Stef anf and the ex get along a little too well and bond over all of Lena’s quirks.

totally awkward when Stef anf and the ex get along a little too well and bond over all of Lena’s quirks. Stef invites Gretchen over for dinner and Lena is again irritated because her former girlfriend of 18 months acts like she knows her better than her partner of 10 years. Gretchen brings up how much Lena wanted to get married and Stef is shocked because she didn’t realize how much it mattered.

Jesus tells everyone that he’s headed to a movie with Lexi but she texts Mariana saying otherwise. Mariana realizes that Jesus must be with their birthmom and if so then he is at the crackhouse that she lives in. She busts up the fight between Lena and Stef to tell them that Jesus isn’t responding to her texts. Stef goes to the house armed and meets Mike there. As they enter they find drugs and we hear gunshots. Tune in next week for more of The Foster’s.