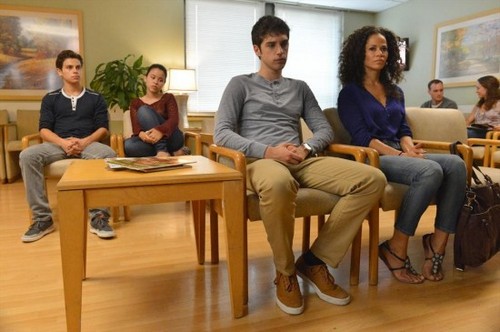 ABC Families new drama, THE FOSTERS returns tonight with its sixth episode called, “Vigil.” On tonight’s show the drastic consequences of Jesus’ visit to Ana play out. Did you watch last week’s episode? We did and we recapped it here for you.

On last week’s show Brandon struggled to please his demanding new piano teacher and rebuffed an offer from Talya to reconnect.  When an embarrassing video of Talya circulated around the school, Callie lent her support and urged Brandon to cut her some slack.  The encounter with his birth mom and her desperate situation drove Jesus to take matters into his own hands, a move that could have dire consequences for the whole family.

On tonight’s show While Lena tries to process the extent of Mariana and Jesus’ lies, Stef and Mike head to Ana’s to try and find Jesus. What they encounter lands someone in the hospital and changes the Foster family forever. While the family waits anxiously for news, tensions rise over the secrets the kids kept from Stef and Lena and even Brandon realizes he’s to blame for covering for the twins. Callie has a heart-to-heart with Brandon to help him understand the perspective of a foster child and Brandon learns how Callie’s mother died.

Tonight’s season 1 episode 9 is going to be an exciting one that you won’t want to miss, so be sure to tune in for our live coverage of ABC Family’s The Fosters tonight at 9 PM EST! While you wait for our recap hit the comments and let us know what you think of The Fosters season 1 this year. Check out the sneak peek video of tonight’s show below, while you wait for the recap!

The Foster’s begins with a literal bang tonight as Mike and Stef go into a crack house looking for Jesus.  He had bounced out to try and get Anna, his birth mother into a safe environment. Stef goes in first and is shot by Anna’s druggie friend. Mike is 3 steps behind her and shoots the gunman before getting Stef help. Lena gets a call from Jesus who has gotten Anna to safety, looking for a ride. As they are driving home Mike calls to tell Lena about Stef.

At the hospital they find out that Stef’s lung has collapsed and she has lost a lot of blood making it hard to stabilize things. Brandon arrives at the hospital and flips out on Jesus and Mariana. He is furious that his mother took them in and now she’s fighting for her life. Meanwhile Mike is being grilled by the police and the shooting will be investigated by internal affairs.

Eventually Lena is allowed in to see Stef along with Brandon, Jesus and Mariana but it’s after the doctor tells them that Stef may need surgery that could cause paralysis. Lena sends Brandon home with the twins and later confesses that she’s trying not to blame Jesus and Mariana for Stef’ being shot.