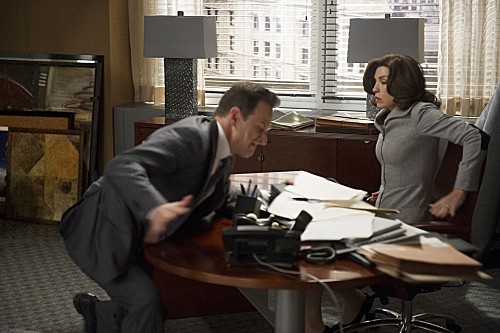 Tonight on CBS THE GOOD WIFE continues with a new episode called, “Hitting The Fan.” On tonight’s show Alizia and Cary’s plans to leave the firm are exposed, leading to a frantic battle for clients. Did you watch last week’s season 5 episode 3?  If you want to get caught up before tonight’s show, there is a full and detailed recap for your enjoyment here!

On last week’s show Alicia attempted to obtain Lockhart/Gardner files as she prepared to leave the firm. Meanwhile, the firm hired Elsbeth Tascioni to represent them in a sexual harassment lawsuit brought on by an employee and Eli and Jackie disagreed over how much influence she should have in Peter’s administration.  Emmy Award winner Carrie Preston returned as Elsbeth Tascioni, Gary Cole returns as Kurt McVeigh and Rita Wilson returns as Viola Walsh.

Tonight’s The Good Wife season 5 episode 5 is going to be exciting, and you won’t want to miss. So be sure to tune in for our live coverage of The Good Wife — tonight at 9PM EST! While you wait for our recap, hit the comments and let us know how excited you are about the new season of The Good Wife.  Check out a sneak peek of tonight’s episode below!

RECAP: Diane walks into Wil’s office and tells him that Alicia and Cary are leaving the firm, she got this confirmed by one of her clients, Sylvia Rucker who said she was leaving with them. Diane knows that Alicia has been planning this for three weeks. Wil is shocked, Diane tells him to document everything. Wil is getting flashbacks to moments with Alicia, one of them when he slept with her.

Wil heads right into Alicia’s office and asks her outright if she is leaving with Cary. Alicia tries to say something, he just wants a yes or no. Alicia says yes and she did decide three weeks ago. Alicia then says that she is sorry, she wanted to try something new. Wil freaks out, he wipes everything off her desk and then he tells her that he took her in when nobody else would, she was poison. Will tells Alicia that she has a fiduciary duty to the firm. Alicia tells Wil that this is how he and Diane started this firm. Wil tells Alicia that she is fired, then he takes her cell phone. Alicia says no, Will tells her that she doesn’t want to push this. Alicia reminds him that she is partner and he needs to take a vote.

Wil leaves the office and calls security. Will wants all the files shut down, he runs all over the office and tries to gather a quorum, he gets it as Diane also votes and she does so to fire Alicia.

Wil then fires Cary, Alicia calls Zach and asks him to copy all her personal files to her cloud, it is an emergency.

Diane confronts Cary and tells him that she is offended that he is doing this, he tells her that he never got a promotion and she fired him the first time. Cary says that he has to start something on his own just like she did. Diane tells Cary to list all the associates that are going with him, he won’t. Diane then tells Cary that he is fired the second time, then tells him to get the hell out.

A client walks into Alicia’s office, she tells her she is forming her own firm and cannot speak to her. Will then arrives at the door, it is time to escort Alicia out of the building. Alicia tells Wil that she wants her phone back, he says when he is finished finding out if she was stealing some of his clients. In the elevator, before it closes, Alicia tells Will this wasn’t personal and he tells her that he doesn’t give a damn.

Kalinda goes to Cary and asks him if he wants another investigator. Cary tells her that if she really wants to join them, then she better get them something good.

Alicia calls Candice about the disposition and tells her they need to start it now, or they will leave. Candice goes and tells Wil. Grace calls Alicia, she needs a permission slip and Wil picks up the phone. Wil promises if he sees Alicia he will give her the message. Cary calls a client, he tries to change the location of their meeting. Candice calls Alicia, David overhears the conversation and starts waving to Wil to alert him. Wil takes the phone, he tells her to stop engaging with their clients or she will be taken to court, they will not have a penny left in the bank. Wil then tells Alicia that her daughter called and the two actually sound civil. Kalinda runs right to Wil and squeals everything she knows. Wil confront Rob, she is the next one that is going to be fired.

Alcia and Cary are just about to meet with Chum when they receive a restraining order, there goes that meeting.

Peter is in his office, he calls in Eli and tells him Doug Fletcher called from the Tribune, Alicia was fired.

Wil is happy he blocked Alicia. Peter calls Alicia’s phone, Wil picks up and tells him that Alicia was in the process of stealing clients. Peter tells Wil that she was not stealing clients, she was starting a new firm. Peter calls Wil a jackass, then he says that he slept with his wife and now he fires her, he doesn’t want him to be his enemy. Will says he has to go because he has a business to run, Peter says good luck with that.

Alicia and Cary cannot move into their new building, David got the building shut down for a health alert.

Diane goes over to see Peter, she speaks to Eli and tells him she just wants to explain things to Peter. Diane wants to know if what happened at the firm is going to affect her, he tells her not to worry.

Alicia is in court with Cary vs. Will and the other partners because of the restraining order. The judge says he has laryngitis and needs everyone to quiet down. The partners call a witness, Diane, she says that she changed her mind. Beth is called to be a witness, she gives some info and then Alicia asks if she was offered something in exchange for her testimony, Wil offered her partnership. The judge is going to allow the restraining order to stay in place.

David calls Alicia Judas, she tells the partners that they are going to take all their clients and then they will just have a very nice suite of offices. Will and the partners head over to meet with Chum, then they get a restraining order, they can’t meet with them either.

Alicia and Peter have a quickie, then the doorbell rings. Diane suggests that both sides should drop their restraining orders, she wants them to meet in the morning.

Mr. Gross meets with Wil first, then he meets with Alicia and Cary. Mr. Gross tells Alicia that he won’t go with them because of her husband’s political agenda, Alicia tells Cary that their firm just went down the drain.

Wil is sharing a drink with Kalinda, tells her that he can’t believe what Alicia did when he offered her managing partner. Kalinda admits that she knew Alicia was leaving a week ago and Cary three months ago, she should have told him. Wil says he is building the firm to be the biggest in the country today and needs to know who he can trust, he is going to destroy the competition. Kalinda tells Wil she can be trusted and she can do it.

Peter is at a press conference, it is regarding a pension. Then Peter goes on to speak about the internet and the lack of taxation on social networking companies. Eli tells Peter that he cannot give his opinion like that, it will come back to bite them. Wil sees the press conference and thinks what Peter said will lose them Chum, it does. Mr. Gross meets with Alicia and Cary, tells them that he changes his mind, he will go with them after all. Cary and Alicia are thrilled, they now have a huge client, they just need office space.

Peter calls Eli into his office, he asks him to put together a list of other supreme court justice applicants instead of Diane. Eli asks Peter if he is sure, he says yes.