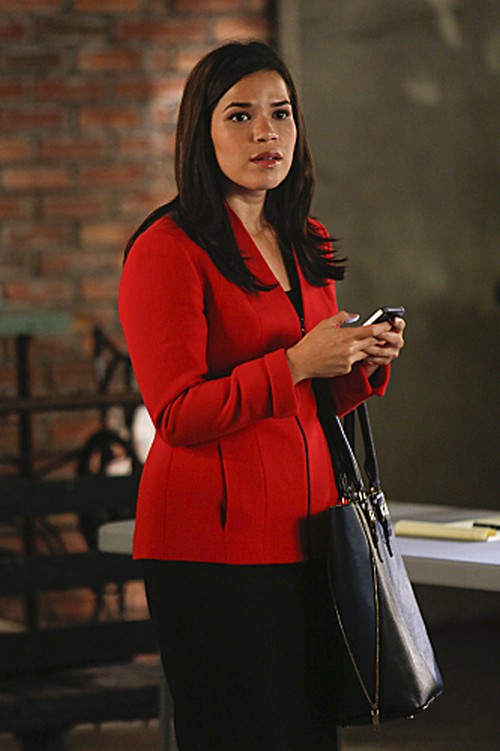 Tonight on CBS THE GOOD WIFE continues with a new episode called, “The Next Week.” On tonight’s show Robyn tries to be more like Kalinda. Did you watch last week’s season 5 episode 7?  If you want to get caught up before tonight’s show, there is a full and detailed recap for your enjoyment here!

On last week’s show Alicia and Cary suspected that Lockhart/Gardner was spying on them when Zach discovered that the webcam on Alicia’s computer was being accessed remotely. Meanwhile, Will took on more than he anticipated when he came to the aid of one of Alicia’s old clients, and Clarke Hayden returned to offer financial advice to Florrick/Agos.  Emmy Award nominee Nathan Lane returned as Clarke Hayden.

On tonight’s show As Florrick/Agos move into their new offices, Alicia represents an undocumented immigrant who faces deportation unless he testifies against a member of a drug cartel. Also, Marilyn is concerned about the ethical ramifications when Eli reconnects with Natalie Flores, and Robyn tries to be more like Kalinda.  America Ferrera returns as Natalie Flores. Series star Josh Charles directs.

Tonight’s The Good Wife season 5 episode 8 is going to be exciting, and you won’t want to miss. So be sure to tune in for our live coverage of The Good Wife — tonight at 9PM EST! While you wait for our recap, hit the comments and let us know how excited you are about the new season of The Good Wife.  Check out a sneak peek of tonight’s episode below!

Tonight’s episode of The Good Wife opens with Will’s girlfriend visiting him at the office, he says she can stay and use his WIFI. David is concerned they have a “yoko ono” situation on their hands.

Natalie Flores comes to the office, and reveals that a friend of hers is caught up in an illegal immigrant scandal. Since she used to work there, she is hoping that they can help her. She asks the secretary to call Alicia, but the secretary tells her she doesn’t work there anymore.

Alicia is moving her practice into a new space, a very low-budget space. It looks like a condemned building. Natalie visits Alicia at her new “office,” and tells her about her problem, Alicia agrees to help. Although the client probably can’t afford to pay them, they think it may help them politically.

Cary is looking to make budget cuts, they can’t afford all of their employees. Robin is the first on the list to be axed, she overhears him discussing firing her.

Alicia heads to the courthouse to meet her new client, Thomas Luiz. The court is pushing him to sign a statement. Alicia ensures he will receive protection. He is a witness in a high-profile case against a cartel.

Alicia returns to her new practice, Marilyn is waiting for her. She says Peter wants to visit her, but they need to ensure they won’t take any photos and the press can’t know he is there. Eli sees Natalie and runs out of the practice after her. He asks her out to dinner, she accepts.

Will is trying to conduct work at the firm, but his girlfriend is distracting him. He receives a call from Natalie’s boss, he is a lobbyist and plans to send all his work there, but they screwed it up Natalie. The secretary reveals she went to Alicia’s.

Thomas’s wife called Alicia upset, they are deporting Thomas without any protection. And, as soon as he gets out of the country, the cartel will kill him.

Robyn returns to the practice and asks if she can come back, she knows she is about to be laid off by Cary. She is kicked to the curb.

Eli and Natalie are out to dinner, she reveals that she no longer has a boyfriend. Natalie receives a phone call from Alicia, she needs her help with Thomas Luiz. She rushes out of their date.

Alicia and Natalie visit Howard Dolan, he says that he can’t offer protection to Thomas because he never actually testified (the guy he was testifying against jumped bail). There is nothing he can do, Thomas will be in Mexico in 12 hours.

Cary does some digging and realizes that they deported the wrong Thomas Luiz. Robyn steps up, she is trying to secure her job, she is going to find the other Thomas Luiz and try to clear up the mix up.

Marilyn reports the status of Alicia’s new practice to the Governor. She advises him not to visit her at work until the practice is more established.

Robyn is working hard trying to track down the correct Thomas Luiz. She has gone rogue, and is riling up Thomas’s girlfriend so that she will lead her to Thomas. Luiz says he will testify in court that he is the real Thomas Luiz in exchange for $10,000.00.

Alicia has to take the real Thomas to the board of immigration. They don’t want to hear their case though, they send her to an immigration judge.

Eli is clearly smitten with Natalie Flores, they are going out on another date. Marilyn is not impressed, after all Natalie works for an opposing party, “The Outsiders.”

David told Isabel (Will’s girlfriend) about Alicia. Isabel wants to know why Will never told her about him and Alicia.

Alicia is still trying to stop Thomas Luiz’s bus to Mexico. While she is talking to the immigration judge, Natalie receives a phone call from Will. Will offers to assist her with Thomas’s case. He apologizes for Howard’s behavior when she went to the office.

Alicia and her crew are still trying to figure out how to get Luiz off the immigration bus. They decide they should argue that he is in a “blood feud” with someone in Mexico. Robyn sets out for proof.

Marilyn is trying to tell the governor about Eli’s relationship with Natalie. She thinks it is a conflict on interest. She thinks he is directing policy based on his feelings for her.

Robyn is back at Thomas Luiz’s girlfriend’s house. She is causing more drama, trying to create a blood-feud.

The governor calls Eli out on his intentions. Eli assures him he is only looking out for the governor, and no one else. Eli flips out on Marilyn, he knows he ratted her out.

Natalie heads to the practice, and Howard apologizes (even though he didn’t want to) for his behavior. She introduces them to her boss Joe Pallotta.

Robyn decides to handle the Luiz case her own way. She manages to successfully get Luiz on the Mexican Consulate watch-list, and he is denied entrance at the border. He is safe, and so is Robyn’s job.

Eli calls Natalie and cancels their date, because Peter needs him. Apparently, he is still loyal to the Governor, despite Marilyn’s claims. Natalie is upset, she starts to leave and then Eli shows up. He changed his mind, he can’t leave her alone.

Alicia’s new chair arrives at her practice. She is testing it out when Peter and Marilyn arrive. He has her interns help her unpack the office. He tells her he thinks she will “take over the world from here.”