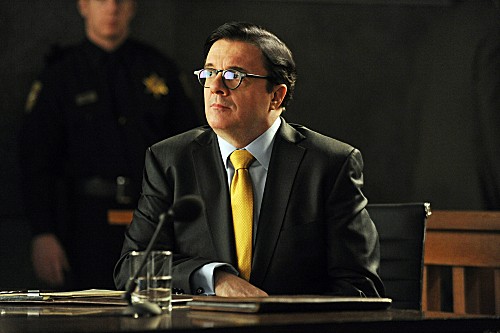 Tonight on CBS THE GOOD WIFE continues with a new episode called, “The Next Week.” On tonight’s show Clarke Hayden returns to offer financial advice to Florrick/Agos. Did you watch last week’s season 5 episode 6?  If you want to get caught up before tonight’s show, there is a full and detailed recap for your enjoyment here!

On last week’s show when Alicia and Cary represented a client who has left Lockhart/Gardner to go with Florrick/Agos, Will and Diane intentionally delayed turning over the case files to the new firm. Also, Marilyn, Peter’s ethics council, tried to give advice to Alicia, and Will’s colleagues were surprised at the new intensity he displayed in the wake of the upheaval at the firm. Richard Kind guest starred as Judge Davies, Mamie Gummer returned as Nancy Crozier and Emmy Award winner Edward Herrmann returned as Lionel Deerfield.

On tonight’s show Alicia and Cary suspect that Lockhart/Gardner is spying on them when Zach discovers that the webcam on Alicia’s computer is being accessed remotely. Meanwhile, Will takes on more than he anticipated when he comes to the aid of one of Alicia’s old clients, and Clarke Hayden returns to offer financial advice to Florrick/Agos.  Emmy Award nominee Nathan Lane returns as Clarke Hayden.

Tonight’s The Good Wife season 5 episode 7 is going to be exciting, and you won’t want to miss. So be sure to tune in for our live coverage of The Good Wife — tonight at 9PM EST! While you wait for our recap, hit the comments and let us know how excited you are about the new season of The Good Wife.  Check out a sneak peek of tonight’s episode below!

RECAP: Jeffrey Grant, a client that was used to dealing with Alicia, calls to speak to her and Will takes the call, but Jeffrey is confused that he can’t speak to Alicia.

Meanwhile, Alicia and her team is speaking about moving to a permanent location. Zach heads into the bedroom and notices that Alicia’s computer hs the web cam on. There is a knock on the order, Alicia has a subpoena, Lockhart/Garner is being sued and she is being called as a witness.

Will is at the police station with Jeffrey to help him, he asks him what the patrolman said to him when he stopped him. Apparently he was stopped for having alcohol on his breath but now breathalyzer was taken.

Will sees Geneva and asks her why there was no breathalyzer taken, she says they are trying to be diligent. Will says he is taking his client home and wants to take his client home. Geneva says no, his client is going to be arrested. In court, Geneva says that she will remove the DUI charge, but Jeffery is going to be charged for murder, they have DNA evidence.  The judge says the kid is staying in custody for the time being. Jeffrey asks Will when he will get out, he says 48 hours max.

Alicia drops by Lockhart/Gardner, she sees David and Diane, pays her respects. In the boardroom, they talk about a case where the firm is being sued for $6 million dollars for an adoption case. Alicia basically tells them she wants the money, the capital contribution refund, they owe her, or she is not going to help and testify. Alicia tells them to call her when they are ready, she leaves.

Jeffrey is in jail speaking to Will, he claims he doesn’t know the girl who was murdered and the DNA couldn’t possibly belong to him. Diane wants to know about his family because the DNA has to be from a man in his family. Jeffrey says his uncle Jim stopped by the school last year to get help on his computer. Will tells Jeffrey to sit tight and study.

Alicia is back at Lockhart/Gardner, she is being asked questions for the adoption case. She says that the couple knew about the problems with the adoption and they wanted to proceed anyway. The person asking the questions, then asks about her being pushed out of the law firm. Diane intervenes and tells him it is enough. The guy then produces a cheque for $10,000.00 that was given to the adopting parents tribe as a bribe. Alicia claims she knows nothing about the cheque.

Will goes to see professor Delaney at the school and he doesn’t want to be questioned,then Will bumps into Owen Cavanaugh and they sit down to talk. Owen says that Delaney had a b+ club, the kids who got good marks would hook up at his house. Owen asks if Jeffrey was a member of the club, Owen says he probably was because he got good marks. Owen then asks about Alicia, Will says she left the firm three weeks ago and he has no idea why.

Kalinda goes to see Jeffrey’s uncle, tells him that they found male DNA under the dead girl’s fingernail. The guy excuses himself, he goes to get a picture, he was a woman pre-op. The guy also tells Kalinda that there is something else Jeffrey doesn’t know, he has a half brother.

David calls Alicia, they went over the billing records, smack in the middle of the adoption proceedings, she was promoted to partner and personally liable for the whole six million dollars.

Hayden is with Florrick/Agos and doesn’t understand how Alicia could be responsible for the whole six million. Owen is at the door, he tells Alicia that Will told him she left Lockhart/Gardner. Owen goes on to say that Will was at the college and bumped into him. Owen asks her why she is in warrior/princess mode, did she leave because she was afraid of getting closer to Will.

Hayden tells Cary that he worked with the books at Lockhart/Gardner and there is a problem with this whole adoption case.

Hayden then goes over to Lockhart/Gardner, he is called as a witness. He says that David was the person who was supervising in the adoption case, not Alicia.

Kalinda has found Jeffrey’s half brother, Anderson Prickett – she tells him that she is interviewing work conditions. She asks him about the 15th of August, when he called in sick and hoped his boss wasn’t harassing him; Anderson runs.

David is on hot water, Alicia is outside waiting and Will walks up to her, says nothing and keeps going.

Zach and Grace figured out that they are being hacked – the person has been taking videos of Grace undressing.

Owen goes to see Will and tells him that Alicia was afraid of falling in love with him and that is why she left. He goes on to say it was easier for Alicia to pretend to hate him than to fall in love with him. Will says it is over, then says goodbye to Owen.

Zach is at school, he hits Styles and tells him to stop it, he figured out he was the one hacking their computers.

In jail, Will tells Jeffrey the attorney wants to cop a plea bargain. Will asks Jeffrey if he killed Dani, he says no, Will says to then reject the deal if he didn’t do it.

Geneva gets the DNA and tells Will it is an exact match for Jeffrey who says there is no way he did it. Will tells him that he will be transferred to county, it may take six months and he needs him to hold it together.

Hayden tells Alicia that they need to be doing billing hours because they need money, her books are in disarray and he will only work for the firm for free while they are in the red.

Grace thanks Zach for what he did at school.