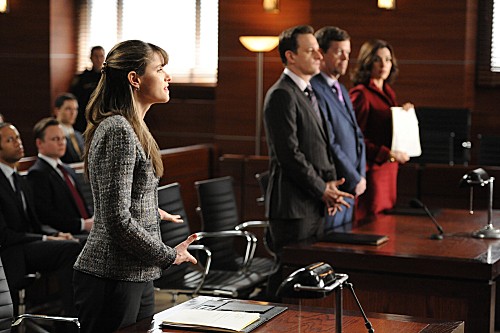 Tonight on CBS THE GOOD WIFE returns with a new episode called, “The Wheels of Justice.” On tonight’s show Diane reunites with Kurt McVeigh but is forced to reevaluate the relationship.  Did you watch last week’s show?  There is a full and detailed recap for your enjoyment here!

On last week’s sh0w when an erratic and litigious client was murdered, Alicia was convinced to waive attorney/client privilege to help the police when she learned that the killer might also be targeting someone close to her. Also, Peter and Mike Kresteva vied for an influential endorsement and Diane received a stunning offer.  John Noble guest starred as Alicia’s murdered client; Matthew Perry returned as Mike Kresteva; and Stockard Channing returned as Alicia’s mother.

On tonight’s show Alicia and Will go to trial unprepared when they learn that an impending Supreme Court ruling could result in Colin Sweeney being jailed for life. Also, Diane reunites with Kurt McVeigh but is forced to reevaluate the relationship.  Dylan Baker returns as Colin Sweeney, Gary Cole returns as Kurt McVeigh and Morena Baccarin returns as Isobel Swift

Tonight’s The Good Wife episode 19 is going to be exciting, and you won’t want to miss. So be sure to tune in for our live coverage of The Good Wife — tonight at 9PM EST! While you wait for our recap, hit the comments and let us know how excited you are about this season of The Good Wife.  Check out a sneak peek of tonight’s episode below!

On tonight’s episode of The Good Wife, Alicia finally get her own office. No more sharing with Carey. Things are looking for Carey as well. Not only does he get his own office but it seems that if Diane wants Carey to take her seat as a partner. With Diane possibly leaving the Law office, she hires Kalinda to do some investigating.

Guess who’s back? Mr. Sweeny has returned, with Alicia defending him of course. He’s still with the girlfriend, the one that impregnated herself with his sperm for the money, and the girlfriend reveals to Alicia that Sweeny asked her to may him. But she has one thing holding her back from an answer. She wants to know will Sweeny kill her after the marriage. Alicia assures her that because she’s broke Sweeny would have no reason to kill her.

Carey has been given the task of hiring associates with the help of the new investigator; however he discovers that ADA office has other plans for Sweeny. They want his misdemeanor to go down as a third strike. After trying to get him and failing, they might just be able to give a life term.

Which leaves only one option, a speedy trial. Pulling in extra help from her coworkers, Sweeny asks for a named partner to be on his case. Unfortunately, Will is available. He happens to dating ADA trying Sweeny. Will mentions this but Sweeny in his own creepy way assures him that it doesn’t matter. Now Will is going up against his recent girlfriend by working with his ex-girlfriend.

Kalinda finds out that someone has been using Diane’s IP address to write “Vampire Diaries” fan fiction. Diane wants to play it down but she can’t if she wants to run for

In court, Will and Laura go at it. Yet surprisingly during their break Laura asks Alicia if there was anything between her and Will. Alicia admits but says assures Laura the affair is  long over.

Meanwhile Carey and Robyn have been interviewing for new associates only to be played by one of them when he takes another job in the middle of the meeting.

Diane has hired her ex, Kurt, to help out the Sweeny case. Surprisingly he agrees to take it. Yet the spark is still there between Kurt and Diane. Also it helps that Sweeny is appearing to be innocent. Although Diane’s dream about sitting on the supreme court gets put to an abrupt halt. Her father had accused his friend of being a communist. The same friend went on to kill himself.

Isobel gets recalled to the stand and for some reason she decides to change her story to make it seem that Sweeny is guilty. What did Sweeny do now?

Diane and Kurt are on their date when she reveals what she learned about her father. They drinking and making out when much to her embarrassment Diane says “We should get married”. She takes back but does anyone really forget it once it’s out there.

Alicia and Sweeny meet over what’s happening about the trial. First she wants to know what went wrong with Isobel. Alicia talks to Isobel later on and finds out why she went AWOL. Isobel doesn’t want a prenup. If Sweeny forgets about it, then she’ll change her story yet again.

Diane gets even more bad news when Kalinda shows a video on Kurt talking about guns and succession from the U.S.  While thinking about their relationship, Kurt finds out that the gun was shot from across the room. So Sweeny really is innocent for once. Even the judge is starting to see it.

Robin and Carey’s revenge on the associate that bailed on them backfires when the poor guy starts crushing on Robin. She shoots him down but he’s leaving the window open.

On the other hand Diane’s window is closing. Kurt wants to wait on the marriage discussion and Diane, after finally making a decision, tells she wants to talk marriage now.

Sweeny gets off with a lesser charge. Much to his and his fiancée’s happiness. Alicia warns him though that Isobel will cheat him. He replies he can always kill her.

After experiencing dirty dreams about Will throughout the case, she brings herself to calling him. But when she hears Laura in the background she quickly gets off the phone. On Will’s end, Laura tells him about an ex that’s coming back before suddenly leaving and getting teary in the hallway. Did what she say about the ex the truth? Or did she suspect why Alicia really did call him?

On next week’s promo the Alicia/ Will/Peter triangle may finally come to blows. But who will get it worse, Will or Alicia?