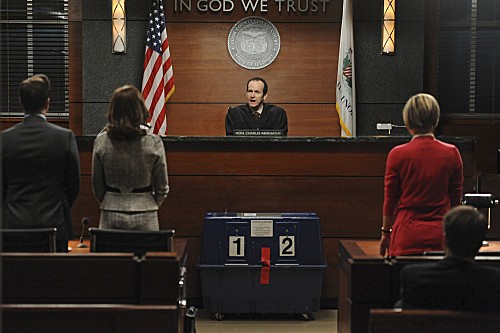 Tonight on CBS THE GOOD WIFE returns with a new the season 4 finale called, “What’s In The Box?” On tonight’s show an unlikely source offers Cary aid to start his own firm, while the conflicted feelings Alicia has in her personal and professional lives come to a head. Did you watch last week’s show? There is a full and detailed recap for your enjoyment here!

On last week’s show Alicia represented a group of software coders in a contract dispute as a favor to her mother, but the case caused unexpected consequences to the firm. Meanwhile, Peter asked Alicia to renew their vows and Kalinda played two sides of the firm against each other.  Mamie Gummer returned as Nancy Crozier. Journalist and CBS THIS MORNING host Charlie Rose guest starred as himself.

On tonight’s show On the night of Peter’s gubernatorial election, Alicia, Will and Diane race to a series of emergency court proceedings when Zach believes he’s witnessed vote tampering. Meanwhile, an unlikely source offers Cary aid to start his own firm, while the conflicted feelings Alicia has in her personal and professional lives come to a head.

Tonight’s The Good Wife episode 22 is going to be exciting, and you won’t want to miss. So be sure to tune in for our live coverage of The Good Wife — tonight at 9PM EST! While you wait for our recap, hit the comments and let us know how excited you are about this season of The Good Wife.  Check out a sneak peek of tonight’s episode below!

It’s voting day and Zach already spots trouble. When he goes in to vote he sees a voting box with a ripped seal. The opponent may have committed fraud. How does Zach knows this? Because he tried to report it the head guy told him he couldn’t take pictures.

Cary is meeting up with his fellow judas 4 years. He’s trying to convince them to hire Kalinda at her price.

Alisha tries to get an injunction on the voting box issue only to find she’s facing off against Patti Nyholm. In the middle of cross questioning, Patti has brought up Zach’s earlier arrest. Zach and his mother defend themselves against his “problem” with authority. Diane comes in to help Alisha.

The guy that told Zach to not take the pictures is on the stand. He’s a republican just like Mike Kresteva. When they bring out the box, the judge tells everyone that the votes actually swing in Peter’s favor. Just when Diane tries to drop the charges Patti then wants bring up some of her own. The Votes are back into debate.

In the middle of investigating the voting box, Cary tries to renegotiate with Kalinda for her price. When he brings in her offer to his people they try to convince him not to over extend himself. Surprisingly he’s caught out by Sweeny. Sweeny tells him how he knows all about Cary’s break for freedom. He’s looking all set to go with Cary until Cary tells him that Alisha isn’t coming with them.

Alisha, Will, and Diane are now trying to reverse all the things they did earlier. The judge informs everyone that the case now depends on what happens in the federal court. As everyone is rushing towards the new court; Alisha gets a call from Sweeny. He wants her to go with Cary. He’s threatening her by saying he’s already signed up to leave.

Will and Alisha make it to the new judge’s office only to find “in your opinion” Judge Patrice Lessner as their judge and the recently fired Jordan Karahalios awaiting in chambers. His new client, someone that has been lagging in the polls, has their name misspelled on the ballot. If his Irish name is misspelled then he loses the Irish vote. The judge eventually dismisses this after Robyn finds out that the client is actually Jewish and O’Dell isn’t his real name.

Eli is taking care of Jackie’s nurse. He gives him a check after Peter gad expressed his worries over the guy.

It’s looking like Cary is giving up on Kalinda. He asks Robyn how she likes Lockheart & Garner. Maybe he knows he can’t get Sweeny’s cash flow after Alisha told him to back off her clients.

Alisha and Will are alone together in the car. When their focus should be on the case they instead end up kissing. Will tells her that they’re going to talk about this later. Back in court Jordan is helping out Patti. He tells everyone how Eli had a backup plan if it looked like Peter was losing. With all that had come out in court it leaves the judge no choice but to throw out the votes.

It’s finally morning or at least 5:45. Eli and Alisha are waiting for the votes when she asks him if they were going to lose. He tells her yes and that Peter is going to need her. Thinking on her feet, Alisha recalls Zach back to the stand. Zach tells him that Jordan is lying because he was in charged and not Eli during the time in question.

Robyn accidently let it slip that Cary approached her with an offer to Kalinda. Kalinda tells her to take the offer. But Kalinda doesn’t have time for that right now. She just find out that Peter’s people did tamper with the box and brings this information to Will.

Will confronts Peter about the votes. There’s some added tension over Alisha and yet Peter manages to keep his hands to himself. He leaves the ball in Will’s court. Back at actually court, the judge readmits the votes and Peter wins. It looks as if Peter would have won anyways because he won by a landslide.

He’s accepting Jackie’s congratulations when he notices her nurse is still around. The nurse tells him how cashed the check but he’s not going anywhere. Later Jackie tells him to back off. It is after all her life.

Kalinda does have her moment. She tells Cary not to toy with her like that ever again.

Alisha is in limbo over her feelings. She should be celebrating with Peter but she’s in the bathroom calling someone. She tells this mystery person to meet her at her apartment. At the apartment, after waiting a while, she opens the door to Cary.

We know what’s going to happen with Cary but what about Will? I guess we all have to wait to find out next season. I hate cliffhangers.