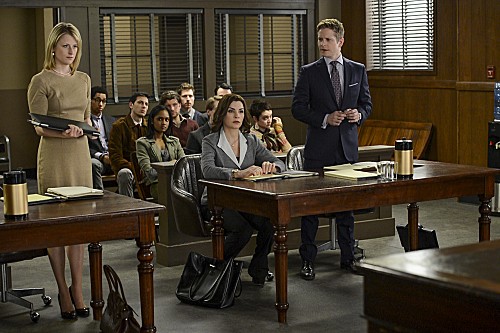 Tonight on CBS THE GOOD WIFE returns with a new episode called, “A More Perfect Union.” On tonight’s show Peter asks Alicia to renew their vows and Kalinda plays two sides of the firm against each other. Did you watch last week’s show? There is a full and detailed recap for your enjoyment here!

On last week’s show as Alicia represented a girl who accused a classmate of rape, the case took on a life of its own when the hacker group “Anonymous” took notice and brought the trial into the public eye via the Internet. Also, Diane continued to be vetted for a possible Illinois Supreme Court seat and Kalinda became suspicious of Robyn.

On tonight’s show Alicia represents a group of software coders in a contract dispute as a favor to her mother, but the case causes unexpected consequences to the firm. Meanwhile, Peter asks Alicia to renew their vows and Kalinda plays two sides of the firm against each other.  Mamie Gummer returns as Nancy Crozier. Journalist and CBS THIS MORNING host Charlie Rose guest stars as himself.

Tonight’s The Good Wife episode 21 is going to be exciting, and you won’t want to miss. So be sure to tune in for our live coverage of The Good Wife — tonight at 9PM EST! While you wait for our recap, hit the comments and let us know how excited you are about this season of The Good Wife.  Check out a sneak peek of tonight’s episode below!

Alicia and her brother are attending a funeral. Their mother brought them to a stranger’s funeral. But that’s not all she did. She also enlisted Alicia to legally help the widow.  What can she do? She agrees.
Peter is meeting with a pollster. He’s told that his people are overly optimistic.  He thought he was winning and instead found out that he’s losing. The pollster tells him to bring in his wife to help get the women’s vote.

Nancy, the ditzy lawyer, is back. She’s the lawyer for the widow’s company. The case is turning into something bigger when the company sends a cease and desists to the law offices.  Alicia and Carey are reviewing the case when unfortunately for them they’re overheard by an assistant.

Later when Alicia and Carey are having a sit down with Nancy’s team, negotiations get blown out of the water when Nancy fires everyone who wishes to discuss their contract.
Alicia and Peter are having some alone time when he proposes to her. But Alicia doesn’t say yes right away. She needs more time.

All those who were fired meet up with Carey and Alicia and are told that if they say they were unionizing, they can’t get fired. The assistant from earlier sat in on this meeting. She tells her coworker about how they need to unionize.

Carey and Alicia lose some ground in court, thanks Nancy, and have to put a witness on the stand. They tell him not to lie but tell a helpful truth. That’s going well except for one of the witnesses who decides to go rogue.

Robyn and Kalinda are investigating when they get help from someone from the Department of Labor.  He discusses the investigators benefits, in which they say their fine, before saying goodbye. However before he leaves the building the assistants approach him over unionizing. Also Kalina asks Robyn over whether she has any healthcare.

Peter enlist Alicia’s brother for some help. Both in office and with Alicia.

Back at the office, the partners tells Alicia that her case has inspired the assistants to revolting. She agrees to sit down with them but knows she can’t really give them anything.

Kalinda and Carey discuss Robyn’s healthcare. Kalinda is pissed Robyn has it and she doesn’t. So of course that’s when Carey makes his pitch to Kalinda about coming with them when the four years leave to start their own company.

Kalinda goes to Will and tells him that she wants healthcare. He tells her that would mean she would have to give up free lancing. He doesn’t believe she’s being courted by another company.

The case swings in Carey and Alicia favor. Although they have 24 hours to get the majority of the workers to agree to an union. Meanwhile Alicia meets up with the assistants and is interrupted by a partner. The meeting quickly into chaos.

Alicia is with her mother and brother. They’re discussing her taking Peter back. Her brother is pro and mom is con.

In court, the swing votes needed to unionize were fired. The judge rules that company can fire them. That Alicia no choice by to try and court back the widow that had switched to the other side. She doesn’t get anywhere with her.

Kalinda’s takes her deal to both Carey and Will and Will seems to be losing a race he doesn’t even thinks he’s in.

Alicia gets the upper hand in court only to continue playing dirty on tv. Her interview for Peter’s campaign goes the way he wants it.

Alicia’s mother can’t be the one to talk to Peter because Alicia told her not; so she instead turns to Will and tells to him to fight for Alicia.

Chum Hum just bought the company. Even though workers were allowed to unionize, it doesn’t matter anymore.  Alicia’s company is still doing dirty work. They bought off the ring leaders in the assistant situation. So overall unions kept getting screwed by Lockhart & Garner.

Alicia doesn’t like any of it and comes as no surprise that after viewing Will in this light that she finally says yes to Peter.   He’s also back up in the polls.

Next week, election day comes around and everyone is nervous. How does Alicia choose to calm down? She kisses Will.