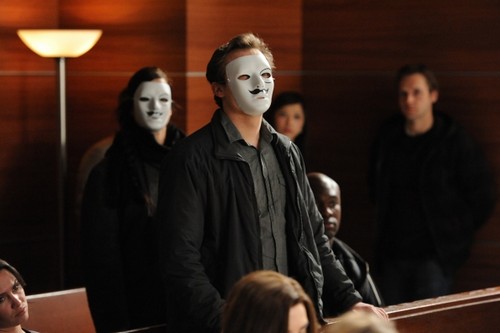 Tonight on CBS THE GOOD WIFE returns with a new episode called, “Rape: A Modern Perspective.” On tonight’s show Diane continues to be vetted for a possible Illinois Supreme Court seat and Kalinda becomes suspicious of Robyn. Did you watch last week’s show? There is a full and detailed recap for your enjoyment here!

On last week’s show Alicia and Will went to trial unprepared when they learned that an impending Supreme Court ruling could result in Colin Sweeney being jailed for life. Also, Diane reunited with Kurt McVeigh but was forced to reevaluate the relationship.  Dylan Baker returned as Colin Sweeney, Gary Cole returned as Kurt McVeigh and Morena Baccarin returned as Isobel Swift.

On tonight’s show As Alicia represents a girl who accuses a classmate of rape, the case takes on a life of its own when the hacker group “Anonymous” takes notice and brings the trial into the public eye via the Internet. Also, Diane continues to be vetted for a possible Illinois Supreme Court seat and Kalinda becomes suspicious of Robyn.

Tonight’s The Good Wife episode 20 is going to be exciting, and you won’t want to miss. So be sure to tune in for our live coverage of The Good Wife — tonight at 9PM EST! While you wait for our recap, hit the comments and let us know how excited you are about this season of The Good Wife.  Check out a sneak peek of tonight’s episode below!

Here Is The Live Recap!!

Alicia is meeting up with a possible returning client, Dylan. Apparently his method of payment are stacks of money he’s willing to pull out of his bag. He talks around the subject until he finally gets to it. But no long after Alicia agrees to take it to the partners that she spots Carey having a business lunch…with other four years.

In their recent case Will and Alicia are defending a girl for both suing her rapist and then publicly naming her rapist. The judge is willing to throw the case if she apologizes but she refuses. Will and Alicia don’t want to push her so they’re going to try and fight for her.

Diane and Kalinda have a meeting with an associate to discuss her running for office. When worries are brought up about Diane’s relationship she quickly injects she’s getting married.

Someone is secretly texting Zach. They send him an attachment which of course he opens. It’s a video about some kids playing around with a blow up doll. But Alicia recognizes one of the kids.  It involves her rape case.

The partners are discussing the Four Year Associates and how they’re all taking their vacation days. Alicia assures everyone that it’s only a vacation and not scare tactics.

Back in court the boy from the video is questioned on the stand. Will manages to trap the boy and the video is allowed in court. But not all of it.

Diane is back to the grueling questions when her interrogator asks about Dylan in the waiting room.

More secret texts are sent this time to Alicia’s daughter. Alicia confronts Dylan thinking he’s the one behind the attachments. He claims its not him but his also idealistic friends. She tells him to stop them because they barely got the video admissible. Later she shows Will the photo and he tells her that they could still use it. She leaves before things get awkward between them but doesn’t notice she left her phone.

Alicia and Grace have a heart to heart. During their discussion, Alicia promises her she won’t be selfish anymore.

Alicia questions Carey again about him leaving the firm. He finally admits it but then he asks her to join him. She tells him she’s going to think about when she notices someone passing her wearing an anonymous mask.

Carey thinks it was Kalinda that spill the news. She denies it but he doesn’t believe her. Although Kalinda now knows where Alicia got her information.

The Anonymous group helps Alicia further by helping her discredit the doctor (for the defense)on the stand.

Kalinda questions her junior investigator for confirmation about Carey’s leak. She gets it but she also is left with more questions about the mysterious Robyn.

Diane talks to judge in order to clarify her fiancée’s stance. Only for her to find out that it was never about her boyfriends but about Will. The judge tells her she’s arrived but she can either stay or slide back down. In other words he tells her to get rid of Will.

The judge finds out the picture is already online before Will asked for a subpoena. He rules the photo inadmissible. Which only upsets the Anonymous members in court.

The partners all come together to find out what’s being going on with Diane. She was spotted down at the Supreme Court. She tells them has been considered but that nothing is decided. Before the other partners van be worked into a frenzy however Carey notifies them about what Anonymous just did. They name the rapist and his conspirators as well as stating their addresses.

Robyn is brought in front of the seniors, her temporary review is over; Kalinda recommends that they keep her.

The judge is ruling a mistrial. That doesn’t help Will with his client still in prison. Kalinda get helps from her friend on the force. She leaks the video of the boy admitting that the girl never gave her consent. With this new evidence the judge frees the young lady from prison.
But will it be enough?

Alicia turns down Dylan as a client after the mess Anonymous made. But with Carey taking clients when he leaves; was that a good idea?

On next week’s promo Peter asks Alicia wants to propose to Alicia again but is that because he’s losing the election? Is it love or conciliation? Guess we’ll wait and see.