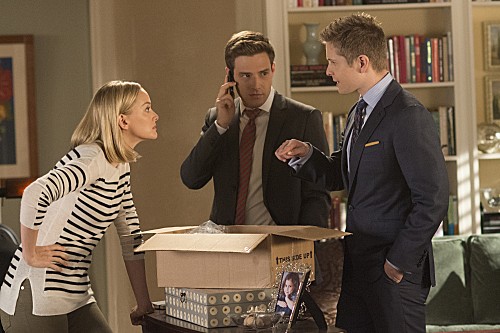 Tonight on CBS THE GOOD WIFE continues with a new episode called, “The Next Day.” On tonight’s show Will’s colleagues are surprised at the new intensity he displays in the wake of the upheaval at the firm. Did you watch last week’s season 5 episode 3?  If you want to get caught up before tonight’s show, there is a full and detailed recap for your enjoyment here!

On last week’s show Alicia and Cary’s planned to depart Lockhart/Gardner were suddenly exposed and a desperate battle to retain clients ensued.  Guest starring on the show were: Tonya Glanz (Candace) and Dan Ziskie (Steve).

On tonight’s show When Alicia and Cary represent a client who has left Lockhart/Gardner to go with Florrick/Agos, Will and Diane intentionally delay turning over the case files to the new firm. Also, Marilyn, Peter’s ethics council, tries to give advice to Alicia, and Will’s colleagues are surprised at the new intensity he displays in the wake of the upheaval at the firm. Richard Kind guest stars as Judge Davies, Mamie Gummer returns as Nancy Crozier and Emmy Award winner Edward Herrmann returns as Lionel Deerfield.

Tonight’s The Good Wife season 5 episode 6 is going to be exciting, and you won’t want to miss. So be sure to tune in for our live coverage of The Good Wife — tonight at 9PM EST! While you wait for our recap, hit the comments and let us know how excited you are about the new season of The Good Wife.  Check out a sneak peek of tonight’s episode below!

RECAP: Diane is getting ready to get out of bed, it is her last case as a lawyer and she doesn’t want to screw it up. Will is also about to get out of bed and he finally feels awake. Alicia overslept, she was really out of it.

Alicia heads into the living room and things are already hectic; there is someone at the door, it is Maralyn from her husband’s staff and she wants to speak to her about the ethic rules for the Governor. Heather is also at the door, she tells Alicia that someone else in her office. Alicia tells Maralyn to come back another day, then she tells Heather that she started her own firm.

Diane is in court and when she starts going back and forth with the other council, the judge calls them into chambers. Cary, Heather and Alicia are in chambers, they want to take over the case and Diane tells the judge that she is insulted.  The judge tells Heather to decide who she wants Diane or Alicia. The judge rules in favor of Alicia, Diane walks out. Diane goes right to Will and tells him, he tells her that he is going to get it back.

Alicia is back home and finds Maralyn there; she is surprised to see her. Maralyn says she needs to take her firm through a short slideshow on ethics. Maralyn runs to the washroom, Alicia finds her in there with her face in the toilet, she tells her that it is morning sickness. Alcia tells Maralyn to return the next day and she make sure the staff watch the power point.

Will holds a meeting and tells the partners that they need to destabilize their competitors. Will’s girlfriend comes to the office and he starts kissing her, then he gets a subpoena; he’s been suspended.

Alicia and Cary are in court over a gun case and the judge favors them over Nancy, the opposing attorney.

Cary walks into another court case to see Olvia and tells her that he thinks her client is innocent.

Diane, Alicia, Will and David are in front of the Compliance Disciplinary Board so that Alcia can get all the case files for the cases she is handling. Will claims that he is not holding the files, the chairman tells him to give up the files, he is already suspended because of nonsense like this.

Gina calls Alicia and tells her that she is having problems because they are paying her less. Alicia says that she cannot hire her, Gina offers to trade something. Gina says that she can help her win her gun case, but she wants the same job and same salary in return. Meanwhile, Alicia’s daughter Grace is spending too much time with her staff and she doesn’t like it.

Cary bumps into Maralyn who tells him that she is there to meet with Alicia. The two chat and Maralyn starts talking about the Chum account. When Maralyn tries to dig deeper, Cary tells her to wait till Alicia returns.

Alicia needs a ballistics expert she goes to see Kurt McVeigh even though he is married to Diane.

Will is at home with his girlfriend Isabel; she tells him that she wants to get pregnant even though she knows home for only three days. Will grabs her and they start fooling around, she tells him she was just joking.

Kurt tells Diane that he has been asked to testify in the gun case by Alicia. Diane reminds her that it is her case. Kurt says he knows but the case is winnable for Heather, the gun is defective and should be taken off the street. Diane tells Kurt to go be a hero.

In court, Kurt is on the stand, Alicia is asking him questions. The opposing attorney gets Kurt to agree that weather could have caused the gun to go off as well.

Kalinda is working both sides and brings information to Diane.

Cary, Will and Diane are again in front of the chairmain, Cary shows him what Will gave them. Cary calls Kalinda into the meeting to be a witness for he and Alicia. Kalinda says that she took notes for the cases. Cary produces an invoice to Heather for investigative services. Cary tells the chairman that the invoice proves that Kalinda was hired by Heather and therefore the notes should be submissible.

Kurt drops by Alicia’s home, he tells her that he examined the bullets again and he gives her bag, tells her it is what she needs to win.

Cary is in court with Olvia, Kurt is on the witness stand and testifies that the gun in this case had a manufacturers defect. Olivia tells her client Adam to take the five years that the opposing attorney is offering, Cary is against it.

Alicia is home, her daughter tells her she is going to her room to study. Maralyn and Alicia are in the bathroom, Alicia is clearly annoyed with her for asking Cary questions and asks her who she is really working for. Alicia asks her outright why she is there snooping around. Maralyn tells Alicia that she got a tip that Peter helped Alicia sign Chum. Maralyn tells Alicia that her story is weak, she should warn Cary not to speak to outsiders and the governor should stay out of her business or it will eventually hurt him.

Will is in the car with his girlfriend and she asks him again what if she wanted a kid, he leaves the car.

Will arrives to another meeting in front of the chairman, he tells him that he is willing to give up the files, but first once to be compensated, $145k which amounts to the standard ongoing rate.

Alicia is back in court with Cary and the judge tells her that she has been replaced as council. Heather and Diane walk in, Heather tells Alicia she is sorry but she just wants to win.

Diane gets a call from the governor and finds out that she did not get the job. Diane goes to see Will and says so they got Heather back. Then Diane tells Will what would he say if she stayed, he says Peter screwed her over. Will tells her, welcome aboard.

Alicia calls her team to order, she tells them that she was impressed with Wallace and Fraye’s offer and they need to get out of her house. They vote, but there is a phone call, Wallace and Fraye has been bought out by Lockhart/Grodner.