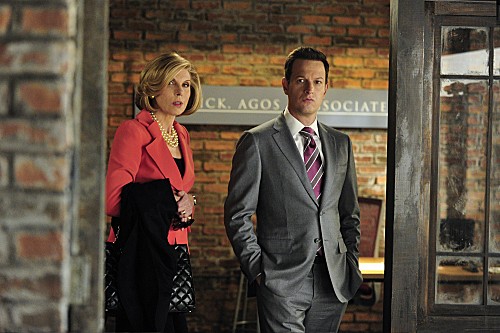 Tonight on CBS THE GOOD WIFE continues with a new episode called, “Whack-a-Mole.” On tonight’s showEli and Jackie clash over a Florrick family secret. Did you watch last week’s season 5 episode 8?  If you want to get caught up before tonight’s show, there is a full and detailed recap for your enjoyment here!

On last week’s show as Florrick/Agos moved into their new offices, Alicia represented an undocumented immigrant who faced deportation unless he testified against a member of a drug cartel. Also, Marilyn was concerned about the ethical ramifications when Eli reconnected with Natalie Flores, and Robyn tried to be more like Kalinda.  America Ferrera returned as Natalie Flores. Series star Josh Charles directed.

On tonight’s show Alicia tries to hold a website accountable when its users accuse her client, a college professor, of being linked to domestic terrorism. Meanwhile, Will goes against Diane’s wishes when he hires Damian Boyle, an unpredictable attorney with ties to organized crime, who immediately interjects himself into Alicia’s website case. Also, Eli and Jackie clash over a Florrick family secret.

Tonight’s The Good Wife season 5 episode 9 is going to be exciting, and you won’t want to miss. So be sure to tune in for our live coverage of The Good Wife — tonight at 9PM EST! While you wait for our recap, hit the comments and let us know how excited you are about the new season of The Good Wife.  Check out a sneak peek of tonight’s episode below!

Tonight’s episode of The Good Wife opens with Alicia Florrick and her staff at their new firm. They are holding a meeting discussing their lack of business and how desperately they need cases.

Meanwhile at the other firm, they seem to be having the opposite problem. At the Morning meeting Diane Lockhart is discussing how swamped they are, and how they desperately need more litigators. They need to start hiring soon. David is more concerned about the clients they have lost, than hiring more lawyers.

During the meeting Alicia receives a phone call from an old client, Zayeed needs her assistance. The FBI is at his home questioning him about one of his friends, for a potential job position, and he feels uncomfortable because the questions are becoming very personal. Alicia grabs Robyn and rushes off to help Zayeed.

Meanwhile at Lockhart/Gardner Will and Diane are going through resumes of potential litigators. He is being very difficult and picky.

At Zayeed’s home the interview turns sour fast. The FBI agent reveals that he has a warrant for Zayeed’s home, they suspect him of terrorism. Zayeed reveals to Alicia that he is working on a book about the Gihad and it is saved on his laptop. He claims he is innocent, but the book on his laptop may seem incriminating. Alicia rushes off to the judge to “squash the warrant.”

Will is interested in a litigator named Damien Boyle, he is infamous for representing organized crime families. He heads to court to watch Boyle work.

Alicia is having a hard time convincing the judge that Zayeed is innocent when the FBI has photos of him at a bombing in Milwaukee.

Will follows Boyle to a dive bar after court, and offers him a job at LG. Boyle says he will think about it.

Alicia and Robyn do some investigating and realize that the photos of Zayeed at the Milwaukee bombing came from a website called ‘Scabbit.’ They were uploaded by tourists who were there the day of the bombing, and they all believe Zayeed is the bomber.

Rachel and Eli are meeting at a restaurant, when a woman named Jackie bumps into them. Eli reveals that Rachel is being appointed to the new Supreme Court Chair, and Jackie tells him it isn’t going to happen.

Will reveals to the lawyers at LG that he offered a job to Damien Boyle. His team is not happy, he didn’t let them vote on the issue, and he just brought him in. Diane takes Will aside and tells him he screwed up, majorly. David is pushing Diane to sanction Will, and kick out the new lawyer, who he refers to as “Mr. Mob.”

Alicia heads to court and pushes the judge to put through an injunction on Scabbit.

At LG Boyle decides to take half of the team on a “legal field-trip.” He takes Howard and a few other employees to Alicia’s new office and packs up all of their furniture and takes it. He learned from Diane that Alicia and her team stole $35 million worth of work from LG, so he decided to take action.

Jackie is waiting for Eli at his office. She wants Peter to drop Rachel, because she slept with Jackie’s husband. Eli says that isn’t an option.

The Zayeed thread on Scabbit was removed due to the injunction, and five minutes later another thread popped up. Alicia takes Scabbit back to court, and this time they actually show up, with their lawyer, Will Gardner. Damien and Will are cocky, they agree to take down the new Zayeed thread and delete it right in front of the judge. The judge seems satisfied. But, the Florricks quickly remind the judge that another thread is going to pop up in five minutes. Alicia wants the judge to ban Scabbit from posting anything about Zayeed, the Judge says that isn’t possible. While Alicia is arguing with Damien, she looks down and realizes that he is wearing her #1 Mom pin that he stole from her office.

Zayeed pays Alicia a visit at her office, and says that he has been fired from his teaching job because of Scabbit.

Alicia takes Will and Damien back to court and is now claiming that Scabbit is guilty of defamation. Alicia brings in a witness, a user and moderator on Scabbit that goes by the username “lotionmyfeet.”

Rachel bumps into Jackie, and Jackie requests that Rachel bows out of her new position. Jackie, the judge’s wife, attempts to blackmail Rachel and tell her husband that she cheated on him with the judge, her plan falls through though when Rachel reveals that her husband already knows.

Damien Boyle has managed to win over everyone at LG, even Howard and David. But, Diane is not impressed, she still wants to get rid of him.

In court Alicia pushed Scabbit to release the names of the people on their site that have defamed Zayeed. After combing through hundreds of usernames Alicia and her team realize that one of the main people posting about Zayeed is a robot created by Scabbit to increase traffic. This means that Scabbit is solely responsible for Zayeed’s defamation and is forced to shut down.

Jackie doesn’t believe that Rachel’s husbands knows about her affair, so she pays him a visit in the hospital. When Rachel sees her making due on her threat, she drops out of the Supreme Court Seat. Eli is not happy with Jackie, he knows she is responsible.

Will and Diane pay Alicia a visit at her empty office to discuss negotiations. Their meeting in interrupted when Alicia receives a phone call from the Judge Kleuger, he wnts her to go out on a coffee-date with him…