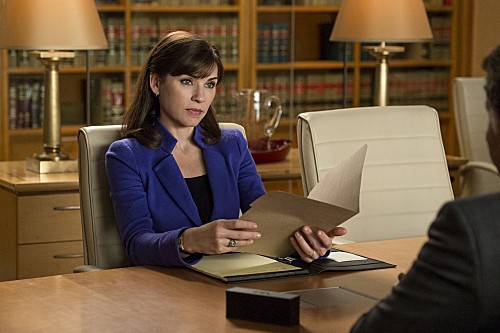 Tonight on CBS THE GOOD WIFE continues with a new episode called, “The Decision Tree.” On tonight’s show Eli and Marilyn are concerned about Peter being seen with Alicia’s more disreputable clients. Did you watch last week’s season 5 episode 9?  If you want to get caught up before tonight’s show, there is a full and detailed recap for your enjoyment here!

On last week’s show Alicia tried to hold a website accountable when its users accuse her client, a college professor, of being linked to domestic terrorism. Meanwhile, Will went against Diane’s wishes when he hired Damian Boyle, an unpredictable attorney with ties to organized crime, who immediately interjected himself into Alicia’s website case. Also, Eli and Jackie clashed over a Florrick family secret.

On tonight’s show Alicia is shocked to learn that a former client bequeathed her millions, but Lockhart/Gardner quickly contests the will on behalf of the deceased’s wife. Meanwhile, Diane asks Kalinda to look into Damian’s background. Also, Eli and Marilyn are concerned about Peter being seen with Alicia’s more disreputable clients at the Florrick/Agos holiday party.  Jordana Spiro guest stars as Detective Jenna Villette. Returning Guest Stars Include John Noble as Matthew Ashbaugh, Alicia’s former client; Stockard Channing as Veronica Loy, Alicia’s mother; Nathan Lane as Clarke Hayden; and Democratic Political Strategist Donna Brazile as herself.

Tonight’s The Good Wife season 5 episode 10 is going to be exciting, and you won’t want to miss. So be sure to tune in for our live coverage of The Good Wife — tonight at 9PM EST! While you wait for our recap, hit the comments and let us know how excited you are about the new season of The Good Wife.  Check out a sneak peek of tonight’s episode below!

Tonight’s episode of The Good Wife opens with a high-speed car chase. Kalinda is tracking Damien, and watches him go into Florrick’s office. While Kalinda thinks he may be jumping ship, he is actually delivering Alicia’s exit-contract from Lockhart Gardner. Alicia looks over the contract and notices something strange, the contract states that she has to stay away from Mathew Ashbuagh’s cases, but he is dead. Meanwhile her staff has their hands full dealing with their Christmas Party crisis, they sent out over 1,000 invitations but only 30 people have RSVP’d. Lockhart/Gardner is having their Christmas party the same day, and everyone is going to their party.

Alicia calls Matthew’s widow, and wants to make sure that his case was handled well by Lockhart/Gardner. His wife was not excited to hear from her, and told Alicia to stay away from her husband’s will or else she would sue her for every penny she is worth, and then hung up on her. Alicia is confused.

Before Alicia can get back to Damien and her contract, she receives a phone call from Peter. He just received an email inviting him to the holiday party.

After Damien leaves Alicia gets a shock, Matthew Ashbaugh, her deceased client, left her $12 million dollars in his will. No wonder LG doesn’t want her handling his cases!

As requested, Alicia gives Peter’s Mom Jackie a call, and invites her to the holiday party. Jackie accepts her invitation.

Back at LG, Damien approaches Kalinda, and wants to know why she is following him. She wants to know how involved he is with his old clients.

Eli is distraught, he got a copy of Alicia’s guest list. Colin Sweeney is attending her party, he is a convict out on parole for killing his wife, and is known as “The White O.J.” Eli doesn’t want the Governor attending a party with “The White O.J”

Alicia is in probate court for Matthew Ashbaugh’s will. His wife is represented by Will, and they are detesting his will. His original will that Alicia helped him draw up left his estate to his wife, but after they died a second will was found in his safety deposit box that he had written up himself in magic marker, leaving his estate to Alicia.

Kalinda is trying to tail Damien again, but it isn’t easy when he is making a game of it. After leading her through the busy streets at 100 MPH and playing chicken with her, he has an undercover police officer arrest her for speeding and driving recklessly.

Alicia’s Mom Veronica is waiting at her office to see her when she receives a phone call from Jackie. She wants to know if Veronica will be at Alicia’s party, Veronica seems upset, she obviously hasn’t been invited to her own daughter’s holiday party.

Diane is questioning Ashbaugh’s wife and trying to prove that Matthew wasn’t mentally stable, the Judge rules that Ashbaugh was not unstable. Then Will announces to the court that they are calling Alicia to the stand, he tells the judge that she coerced him as his lawyer and encouraged him to leave her money. The judge says they will return to court tomorrow and Alicia will take the stand.

Alicia returns to her office and Robyn reveals that 835 have RSVP’d to their holiday party. Alicia finds out that Cary sent out an email and told everyone the Governor was attending, so now they are all coming to their party instead of LG. Everyone except for her mother Veronica, who is waiting in her office, very upset that she wasn’t invited. Alicia patches things up with her Mother and invites her to the party.

Eli is waiting at her office too, he wants her to uninvited Sweeney to the holiday party. Alicia says that isn’t an option.

Kalinda is still in the back of the cop’s car, she hasn’t even booked her yet. They are sitting, waiting. The cop reveals that Damien has asked her to stall Kalinda.

Will is in his office preparing his questions for tomorrow. It isn’t difficult considering his history with Alicia, he knows exactly how she will answer every question. When Alicia was representing Ashbaugh, she was having an affair with Will. Will plans to use his examination as an opportunity to air Alicia’s dirty laundry. Will is remembering back to when he was involved with Alicia, and it is clear that he very bitter. He thinks that Alicia used him to steal his clients. Isabella interrupts his trip down memory lane and tells him to come to bed.

Eli is still trying to convince Peter not to attend Alicia’s holiday party. He has finally broken him down and Peter agrees to call Alicia and cancel.

Kalinda seduced the cop that arrested her, Jenna, and is in bed with her. She is trying to sweet-talk her into dishing on Damien, but Jenna is loyal, and has no intention of sharing any dirty details about Damien.

Will is questioning Alicia in court. He asks her if she ever claimed Mr. Ashbaugh was in love with her? She admits she did, but Will is playing dirty, that is something Alicia said while she was hooking up with Will behind closed doors. Will’s plan backfires though. Alicia throws David Lee and Lockhart/Gardner under the bus and tells the judge that David encouraged her to flirt with Ashbaugh and convince him to sign the will that left his money to his wife.

Peter has blindsighted Eli, he is going to Alicia’s party, and bringing Donna Brazil with him. The party is in full swing and Alicia is trying to run interference between between her Mother and Jackie. She receives a phone call from Will in mid-party and he reveals that they found five more wills from Ashbaugh leaving his money to five more women, so the judge is just going to throw out all of them. It looks like Alicia won’t be receiving a $12 million dollar Christmas gift this year. Although, she may be getting a much less pleasant gift. Veronica asks Marilyn if she is having a boy or a girl, Marilyn announces it is a boy…and she plans to name it Peter. Either Marilyn is a super dedicated employee, or she is about to give birth to Peter’s son?!