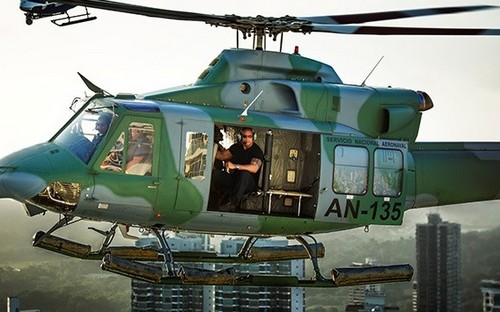 Last week Dwayne “The Rock” Johnson and TNT brought us a new fantastic reality based show called THE HERO. The Rock not only acts as mentor and host to the contestants, he is also the Executive Producer. If you are not familiar with The Rock’s work, he carries 17 wrestling champions and dominates the WWE. He has been in a lot of different movies ranging from “Race to Witch Mountain” to his latest, “Fast & Furious 6”. Last week The Rock provided the contestants a hint about The Hero challenge, “not to be afraid of the dark”. In the end, Dave is the guy to do the challenge and he takes it head on. Did you watch the episode? If you missed any of it, you can watch the full and detailed recap right HERE.

In ratings, for it’s premiere episode, The Hero netted 2.1 million total viewers in it’s time slot, but then an encore presentation gave it another 1.1 million. Fans love The Hero, but unfortunately it fell a little short for TNT’s stab at reality for this summer. Let’s hope things pick up in the second episode.

Tonight Patty has yet another fear that she is going to face head on, last week it was heights, it’s anyone’s guess what it will be tonight. The War Room is going to be really intense tonight, emotions are going to be at the boiling point. Check out the official synopsis below:

Episode Synopsis: The contestants must push an all-terrain vehicle through Colón, Panama. They must also fly in helicopters and maneuver through a dry dock as it fills with rushing water. Shaun is offered a temptation, while Patty begins to overcome a really huge fear.

Hit the comments below and let us know what you think of TNT’s new show. Do you think The Rock will continue to give the contestants hints about The Hero challenge, or was that just being a little soft on them for the first challenge? Tonight some crazy machines are going to be involved with the challenges, it will be interesting to see how the contestants deal with them.

We will be live blogging The Hero Season 1 Episode 9PM EST . . . so make sure to come back to this spot and watch the show with us. Make sure to refresh often so you get the most current info!