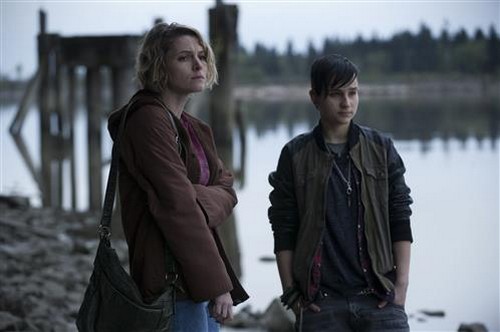 THE KILLING continues tonight on AMC with its forth episode.  On tonight’s episode called, “Eminent Domain”  Sarah and Holder catch up to the latest victim. Seward comes face to face with his past. Out in The Jungle, Bullet struggles with the truth.  If you want to catch up before tonight’s episode, you can read our full and detailed recap, right here.

On last week’s show Seward’s role started to heat up. Holder’s new informant, Bullet, was called upon again. More and more, there were connections between the current case and Linden’s past and the reason why Seward was locked up.  The task force shut down a business; Sarah and Holder united in their pursuit of “the voice;” Seward was offered motivation to comply with orders.

In tonight’s show from the preview they are trying to link Joe and Ray together.  Linden tells Ray that she knows he did not kill his own wife; it just so confusing. I have no idea what to expect because the girl in the hospital says, the man said he’d save her, does that mean Joe really is a bad guy? I have no idea what to believe. Linden and Holder are hoping the latest victim will be able to tell them enough to bring in the right guy.

We will be live blogging The Killing Episode 3 beginning tonight at 9PM EST . . . so make sure to come back to this spot and watch the show with us. Make sure to refresh often so you get the most current info!