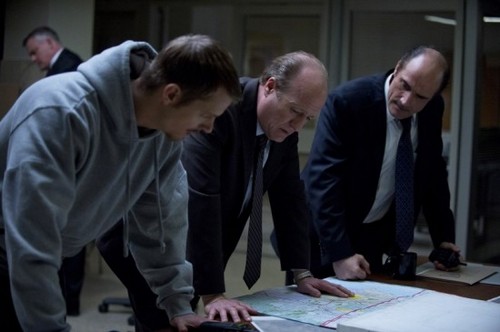 THE KILLING continues tonight on AMC with its seventh episode. On tonight’s episode called, “Try” Bullet makes a choice to save Lyric and learns a dark secret. If you want to catch up before tonight’s episode, you can read our full and detailed recap, right here.

On last week’s show Sarah and Holder got a break in the case. Seward fought against his own mortality. Bullet took on the role of the protector.

On tonight’s episode the investigation reaches a fever pitch when Sarah goes missing. Bullet makes a choice to save Lyric and learns a dark secret.  Seward’s running out of time, and soon, it won’t matter who thinks he’s innocent.  We are quickly racing to the finale since there only 10 episodes in season 3.

We will be live blogging The Killing Episode 8 beginning tonight at 9PM EST.  so make sure to come back to this spot and watch the show with us. Make sure to refresh often so you get the most current info!  While you wait for the recap, check out a sneak peek of tonight’s episode below!

The last we saw of her Sarah had a gun to the back of her hand. Its revealed to be good ole Pastor Mike. He commands her to drive. Throughout their drive he still claims his innocence and tries to explains himself to her, He talks about how much pain these endangered kids are in and that he just wanted to help them.

Meanwhile back at the police station Bullet manages to get a hold of Holden to tell him about Pastor Mike’s plan. Lyric had called Bullet to tell her that Mike was going to kill her where he killed the other girls. Holden now knows the train station may have all been a diversion and he gets permission to go look for Lyric.

The search is underway at the park when Holden listens in on Sarah’s radio. She had sent out an emergency airwaves. The police now know she’s been taken hostage.
Sarah is keeping Mike talking. She reveals she knows his true back story and that gets him to open up more. Unbeknownst to him the cops are following their whole conversation. She’s also sending out little clues to be found.

She gets him to talk about the girl from his past. He tells her that he hadn’t kidnapped the teen several years ago. He was detoxing her but no one believed him over her. He lost everything over that accusation. She tries to identify she lost her son in a custody battle. Something that a couple of cops, listening in, found funny until Holder sets them straight.

Mike leads Sarah to into an underground garage. Sarah keeps trying to tell him he doesn’t have to do this but he makes her turn off the car. They’re just sitting there and Sarah tells him the truth about her son. That she had given him away. Mike is feeling conflicted and asks Sarah to take him to the water.

The police squad is shocked to find Sarah still alive but her battery is dying and manages to send out on last clue before the radio gives out. Holder picks up on it an everyone is heading out to her rescue right when Mike catches sight of the radio and demands Sarah pills over.

He has her out on a pier on bended knees with a gun to her head. She began to beg him. Taking an unusual turn Mike doesn’t kill her. He prays before tossing the gun in the water.

The cops are able to get there quickly. At first Mike refused to take his hand out of his pockets, a tactic that would have gotten him killed, until Sarah tells him it would be harder on the cops to shoot him.

Over at the prison, Ray has to come to term that there won’t be anymore last minute appeals. His lawyer is trying to talk him into accepting death however Ray begs him to talk the cop that believes he’s innocent. Later he goes into a panic attack and the guards are able to clam him down.

The police are reviewing what they have on Pastor Mike and it comes out that he didn’t kill the girls. Also Bullet had lied about Lyric’s phone call. Lyric was seen hustling a couple miles over. They had pushed Pastor Mike for essentially nothing. Holder is pissed and completely goes off on Bullet and cuts all ties to her.

Trying to fix the situation, Holder goes over to Sarah’s with food. She tells him about her ordeal. Waiting to die also made her think that this was what the previous victims must have felt.

Bullet tracks down Lyric who is upset about Bullet telling everyone she was missing. She simply went back to Twitch and bluntly tells Bullet she’s not gay. Feeling hurt, Bullet goes to get something to take when she finds out about one of the victims getting their fingers chopped off.

Frank’s wife apprehends Eddie while he’s leaving. Eddie thought the guy went home but she tells him that he rarely comes home and that she’s afraid of her husband. Franks acts like he hates her sometimes. She ask him to help her or at least talk to her but he dismisses her and keeps walking.

Bullet is able to get a hold of Angie before she leaves. She asks Angie to stay and help them catch the guy but Angie is really scared about staying with the killer still on the loose. Bullet calls Holder to talk but Holder rejects the call. He’s still at Sarah’s. They were going over the case. Holder should have picked up the phone because Bullet is claiming to know who the killer is.

Ray calls Sarah and pleads with her to help save his life before it’s too late. She assures him that she still believes in him. But can she really save him or is just giving him false hope?