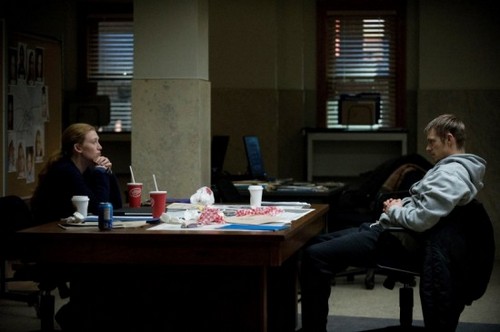 THE KILLING continues tonight on AMC with its seventh episode. On tonight’s episode called, “Hope Kills”  Seward fights against his own mortality. Bullet takes on the role of the protector. If you want to catch up before tonight’s episode, you can read our full and detailed recap, right here.

On last week’s show they were trying to link Joe and Ray together.  Linden told Ray that she knew he did not kill his own wife; it seemed so confusing. I had no idea what to expect because the girl in the hospital said, the man said he’d save her.  I had no idea what to believe. Linden and Holder were hoping the latest victim would be able to tell them enough to bring in the right guy.

On tonight’s show Sarah and Holder get a break in the case. Seward fights against his own mortality. Bullet takes on the role of the protector.

We will be live blogging The Killing Episode 7 beginning tonight at 9PM EST.  so make sure to come back to this spot and watch the show with us. Make sure to refresh often so you get the most current info!

Holden and Linden are talking to the creepy Pastor Mike. The preacher claims he can’t offer any help but will tell them if Angie decides to reappear. Someone happens to be listening to their conversation though.

Lyric’s boyfriend does however reappear only to find her in the arms of Bullet. He doesn’t seem to be too mad about it. After all he does admit he has a piece of ass all over the city. Lyric is upset when he says this and begins hitting him. He leaves but not before he tells her to get out. She forgot it was his place.

Linden and holder are still trying to figure out their killer’s mindset. But Linden is tired and decides to head out. Just one little problem, she runs into Cody. He wants her attention now and not another stall until tomorrow. Linden isn’t having it and immediately dismisses him when he tries to grab her.

Holder doesn’t go home he goes to hang out with the homeless kids. He’s trying to getting information from Bullet after Lyric walks. Holder questions Bullet about the preacher only for Bullet to say that’s the only guy who’s not a pedophile in the city.

Ray is in his cell when the prison guard Frankie tries to toy with him. It end up with Ray toying with Frank. Frank does get his own back by talking about how people who hang tend to crap themselves.

Danette storms into the shelter searching for her daughter. The preacher tells her Kallie isn’t there and offers to speak with her. He talks about how Kallie wanted to be a hairdresser, like Danette, and how Lyric is still out there because she’s tough and a survivor. Danette is leaving the shelter when she sees a note on her window. It says “He’s lying”. She brings the note to Linden.

Linden and Holder are trying to find out who sent the note. It’s the same person who listened in on their talk with Pastor Mike. Rayna tells them how Pastor Mike had come back alone after seeing the latest victim with blood all over his shirt.

Lyric is telling Bullet about her dreams for the future and he confesses he’s in love with her. But now they have to think about where to stay at night.

Holder and Linden are telling Skinner about how far they got into the investigation and he’s willing to get a search warrant.

Pastor Mike is speaking to Bullet. Bullet wants a safe place for Lyric when she accidentally tells the Pastor about how the cops believe the newest victims came to the shelter.

Ray is getting weighed for his physical. He’s being difficult but Evan manages to get him on. Ray is still in a dark place when Frank comes by again. The execution is set and Ray can’t help but to fall apart.

Holder and Linden are staking out Pastor Mike. They’re talking about their live both appearing to be discontent with it and the calls comes in. Holder tells Linden the real Mike died four years ago so who is this guy calling himself a pastor? Holder and Linden go to Pastor Mike’s. His car is immaculate yet they push on. They begin talking to Mike never once bringing up their own intel and still they never dent Mike’s story. They leave without ever knowing that Lyric is staying with the good pastor.

When they get back to the station, Holder and Linden find out that Mike was charged with kidnapping a sixteen year old girl. He got off because his victim OD before trial.

Lyric gets up in the middle of the night hungry. Pastor Mike finds her in the kitchen and he begins talking about people only see what they want to see. Lyric nervously tells him Bullet will be there any minute now.

The cops finally burst into Pastor Mike’s place and end up finding no one.

Danette is waiting for the detectives when she meets another woman waiting. The other woman has a daughter that’s been missing for seven years and now believes her daughter could be one of the unidentified bodies.

Ray is in his cell and his fellow inmate tells him about a good death.

Frank is showing his son how executions are carried out. He isn’t allowed to show his son this but wanted Frankie to know about the right and wrong.

Linden believes Mike is the killer and she’s also eaten up that Ray will be executed because they have no proof of the man’s innocence. Nevertheless they to find the Pastor’s car. Mike left it at the train station.

Linden gets back into her car and someone has her by knife point. Is it Pastor Mike or the seemingly innocent Cody?