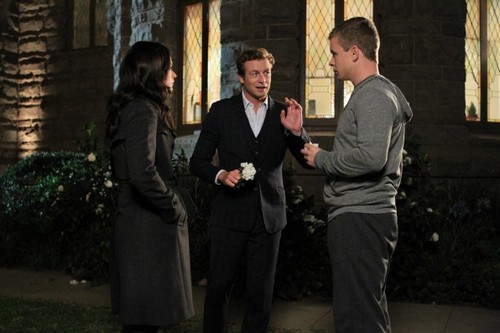 Tonight on CBS THE MENTALIST returns with a whole new episode called “Red, White and Blue.” On tonight’s show the body of a female army medic who worked with soldiers with PTSD is found near a military base. Did you watch last week’s show? We did and we recapped it here for you!

On last week’s show Lorelei Martins returned, determined to find out if Red John had a role in her sister’s death, and Jane was forced to confess to Lisbon his part in Lorelei’s prison escape.  Emmanuelle Chriqui returned as Lorelei Martins. Emmanuelle Vaugier guest starred as Melissa Enfield, a trustee at a women’s shelter.

On tonight’s show the CBI team investigates when the body of a female army medic who worked with soldiers with PTSD is found near a military base.  Jane believes a witness with a bad memory may prove helpful.

Tonight’s The Mentalist episode 17 is going to be exciting, and you won’t want to miss. So be sure to tune in for our live coverage of The Mentalist — tonight at 10PM EST! While you wait for our recap, hit the comments and let us know how excited you are about this season of The Mentalist.  Check out a sneak peek of tonight’s episode below!

Tonight’s episode begins with a woman named Corporal Lucy Green having her throat slit. Some military guys show up to try and take the case out from underneath Jane and Lisbon, but they get nowhere. They start investigating and find out that Lucy’s family is in New Jersey and a Corporal named Rose is her next of kin. She says they knew each other from a tour in Afghanistan and that Lucy rarely made mistakes. Someone was sending Lucy flowers and it freaked her out. Jane thinks she’s not 100% honest as she directs them to a Dr. Bowman.

A local bartender says that Lucy came in a few times a week and is hassled by guys that are under Sargent Hawkins. According to Dr. Bowman Lucy worked well with soldiers that had brain injuries. After listening to the 911 tape they realize the caller is a solider in one of Lucy’s groups and when they find they guy who made the call, he doesn’t remember making the call.

Pete remembers nothing short term. He carries a pager to remind him to take his meds. The night Lucy was killed he went for one of his usual walks but can’t remember why. Lisbon finally tells him that Lucy is dead and he’s stunned.

After some digging Jane finds out that Lucy filed an anonymous sexual harassment complaint. She did it on Rose’s behalf. Hawkins started investigating the complaint and Lucy unraveled. Lisbon sits Rose down and finds out that Officer Lewis was the one who harassed her. Of course Rose won’t admit it because it’s against regs.

Jane wants Lisbon to bring Pete to the scene of the crime to reenact things to try to jog his memory. A church bell nearby rings as the walk and it works, Pete remembers. Hearing a fight and finding Lucy. She tried to speak but couldn’t because her throat was slit. Cho brings Lewis in for questioning and of course he denies everything. Cho then corners Hawkins and suggests that he talks to and protects Rose. He refuses and said there was no proof of abuse.

Pete writes down everything that he remembers, included the medic locker key that Lucy gave him. There’s an emergency call and everyone scatters. Dr. Bowman heads to he medic locker room and gets caught by Lisbon. Jane looked into Bowman’s records and finds he has been writing fake scripts to get more money to pay his alimony and child support. He says Lucy had caught on and it only takes a minute to bleed to death if your throat is slit so he watched Lucy bleed until Pete arrived.

In the end Hawkins decides to take Rose’s harassment claim seriously too. Pete pays Jane a visit and asks him to help get his memory back. He shows Jane a photo of his buddies in a tent in Afghantistan. He was the only one that survived the grenade attack and Jane begins to help him. Tune in next week for a new episode of The Mentalist.