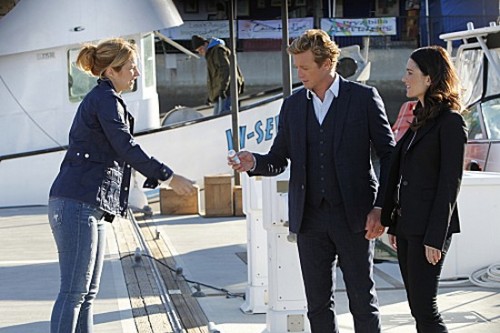 Tonight on CBS THE MENTALIST returns with a whole new episode called “Red Lacquer Nail Polish.” On tonight’s show Jane and the team investigate the murder of an elderly heiress whose remains are found in the living room of her spooky mansion. Did you watch last week’s show? We did and we recapped it here for you!

On last week’s show the team investigated a case involving a graduate student at a natural history museum and discovered how ruthless the academic world can be.  Kyle Secor and Reed Diamond guest starred on the episode.

On tonight’s show Jane and the team investigate the murder of an elderly heiress whose remains are found in the living room of her spooky mansion.  CBI Forensics Brett Partridge returns.  Mariette Hartley guest stars as Elise Vogelson, the heiress.

Tonight’s The Mentalist episode 15 is going to be exciting, and you won’t want to miss. So be sure to tune in for our live coverage of The Mentalist — tonight at 10PM EST! While you wait for our recap, hit the comments and let us know how excited you are about the return of The Mentalist?

Tonight’s episode begins with Jane and Lisbon being called to the sprawling mansion of an heiress that was found scorched on the floor near her fireplace. She was divorced 5 times by age 40 and she clearly was murder. They kick around the notion of spontaneous combustion but Jane points out that a set of scotch glasses are nearby with one in the fireplace. It shows she didn’t spend her final moments alone.

Ms. Vogelson’sdoctor called her security guard to check on the heiress and he is the one that found her. Jane sits down with Vogelson’s nephew and learns that the old woman loved to sail so they go and visit the younger woman that she sailed with. Elyse Vogelson’s nephew said that she was losing her mind but this woman says she was sharp as a tack. She gets one of Elyse’s pill bottles and it leads them to Dr. Reinhard.  After following a few non-leads they end up looking closer at Elyse’s nephew, Chris. Supposedly he has done everything in his power short of murder to get his hands on the family money. With Elyse gone there is now a clear path for him to get it.

Chris insists that his aunt was making bad decisions and that she was costing the family millions. She left an outrageously expensive boat to her young sailing friend. The friend doesn’t want the boat but seems truly concerned about Elyse’s state of mind. She insists that the woman was being drugged improperly.

Dr. Reinhard is caught red-handed  shredding documents that prove he had over medicated the heiress. He tells Brison that the old lady had forced him to medicate her or else she would divulge his past and ruin his life. He later voided her will because he knew that she wasn’t in sound mind to make decisions.

Brisbon and Jane end up with a warrant to search Chris’ home and business. They recover a family medal stolen from the heiress and he is arrested for murder. Something seems to be off though.

Jane goes back out to talk to the girl on the boat following a hunch. He purposely drops a flare into the galley and smokes out Elyse who is alive and well. She is arrested and her friend will be forced to testify against her. Elyse took the family money and intended to escape with her friend until she no longer needed her. Elyse enjoys relaying the whole story to Lisbon. It’s obvious that this woman weas sharp as a tack! Tune in next week for a new case on The Mentalist!