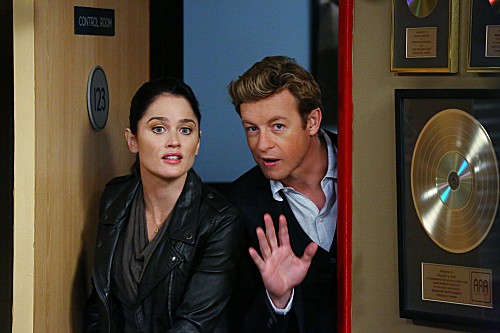 Tonight on CBS THE MENTALIST returns with a whole new episode called “Red Velvet Cupcakes.” On tonight’s show Coop threatens to quit after not being named Chief of the ER, but Jackie talks him down. Did you watch last week’s show? We did and we recapped it here for you!

On last week’s show the CSI team heads out to a run-down Wild West tourist town when the owner is found dead. Meanwhile, Kirkland tries to find out how much Jane knows about Red John.  How close is Jane to catching Red John, the man who murdered his wife and little girl

On tonight’s show Jackie and Kevin’s divorce mediation hits a wall when he demands full custody; and a released bus-crash patient returns after contracting sepsis while at All Saints. Later, Coop threatens to quit after not being named Chief of the ER, but Jackie talks him down.

Tonight’s The Mentalist episode 20 is going to be exciting, and you won’t want to miss. So be sure to tune in for our live coverage of The Mentalist — tonight at 10PM EST! While you wait for our recap, hit the comments and let us know how excited you are about this season of The Mentalist.  Check out a sneak peek of tonight’s episode below!

Tonight’s episode begins with housewife, Missy Robert’s being found shot dead in her bathroom. Rigsby describes the family home to Jane over the phone and by the impersonal bedroom and dieters fridge he concludes that they are not a happy couple. Ironically Kip Roberts is on a white water rafting trip and supposedly has no clue that his wife is dead. Missy worked at a bakery and one of the girl’s that worked there was dealing drugs. The girl is named Monica and Missy reported her.

Lisbon also finds out that Kip and Missy had appeared together on a radio love doctor’s show. It seems that they thought it might help their failing marriage. Rigsby sees Monica in an alley and once he identifies himself she takes off running. After finally catching her she says she messed with Missy for awhile but was at a family party the night before.

Lisbon and Jane head to the studio to interview Buddy, the love doctor that tried to help the couple fix things. He seems convinced that Kip would never have hurt her. Lisbon steps out to take a call and returns to tell Jane that Kip was spotted in Tahoe with a hot blonde. Apparently Buddy’s marital help was a bust.

Lisbon and Jane trail Kip to the hotel where he’s staying with Rosie. He is pulled in for questioning and admits to the affair. Rosie gets rough with him and it’s a big turn on. He tells them that he swore he was going to break things off because his last phone call with Missy was great. He felt connected to her and then guilty.

Jane watches the video of Missy and Kip’s webcast and starts piecing together clues. He heads outside and talks to the male half of a couple about to do the latest installment of radio. Jane basically talks him out of doing it. Waiting in the wings to fill in is Rigsby and his undercover partner. They are told even before a proper interview that they’ll be live on the air in 15 minutes. Buddy digs right into their sex life which actually has existed in the past. They are actually airing their real dirty laundry as Lisbon and Jane listen.

Rigsby leaves the session and Buddy offers Stacy private sessions. She decides to call herself a cab and once she’s out of view she breaks the heel on her shoes to pretend she needs help. Buddy takes her back to his office. Jane, Lisbon and Rigsby are listening from the car as Buddy makes it pretty clear that he has a foot fetish. He gives Stacy the shoes that he stole from Missy and as he is putting them on her feet Buddy’s wife busts in with a gun. She killed Missy and is about to blow everyone in the room when Lisbon and Rigsby burst in.

Buddy admits to an affair with Missy. He says that she broke it off with him because she wanted to make the marriage with Kip work. She gave Buddy her shoes as a parting gift. His wife says it felt good to kill Missy. It was revenge on all the women that he had cheated with. Tonight’s episode ends with Jane and Lisbon discussing foot fetishes and Stacy and Rigsby liplocked.