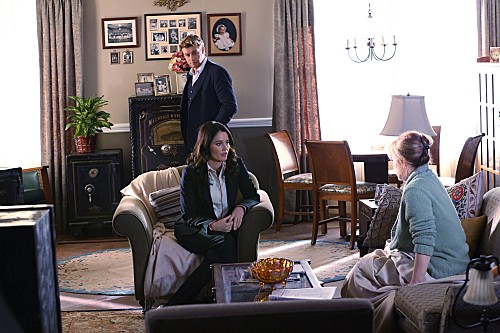 Tonight on CBS THE MENTALIST returns with a whole new episode called “Red and Itchy.” On tonight’s show Jane’s is asked for help when a  mysterious container J.J. LaRoche has been hiding for nine years is stolen from his home Did you watch last week’s show? We did and we recapped it here for you!

On last week’s show Jackie and Kevin’s divorce mediation hit a wall when he demanded full custody; and a released bus-crash patient returned after contracting sepsis while at All Saints. Later, Coop threatened to quit after not being named Chief of the ER, but Jackie talked him down.

On tonight’s show J.J. LaRoche personally requests Jane’s help when the mysterious container he’s been hiding for nine years is stolen from his home.

Tonight’s The Mentalist episode 21 is going to be exciting, and you won’t want to miss. So be sure to tune in for our live coverage of The Mentalist — tonight at 10PM EST! While you wait for our recap, hit the comments and let us know how excited you are about this season of The Mentalist.  Check out a sneak peek of tonight’s episode below!

Tonight’s episode starts with a break in at J.J.  LaRoche’s home. His Tupperware container that he has hidden for 9 years is the only thing that was stolen. Apparently there’s a security leak in the CBI that he’s investigating and this box can ruin J.J.’s career. He has a time frame to either return the box or have his secrets exposed. He bites the bullet and asks Jane for help.

Meanwhile Will ends up dead because after breaking into J.J.’s safe he was foolish enough to fire on an officer. J.J. Starts giving details to Jane, proof that there’s a leak and shady dealings inside of CDI. J.J. Keeps insinuating that Jane knows what is in the box but Jane keeps insisting he’s clueless.

Jane and Lisbon go to talk to Will’s wife and he follows a hunch. Since Will’s hands weren’t working so well anymore the wife was helping him do his safe cracking job. Jane proves it by locking the cat in a safe and Will’s wife goes to work, getting the cat out in under a minute in spite of not knowing the combination.

Will’s wife is questioned downtown and she admits that she opened the lock that cost her husband his life. She says she dropped the Tupperware container off herself. Jane and J.S. Rush to the drop site and they find a man with a similar container. After he’s on his knees they see his little boy wanting to know what’s going on and in the Tupperware is a peanut butter sandwich.

Lisbon is interviewed publicly to try and restore public faith in the CBI and one of the agency bigwigs watches from her desk and we see that she has the Tupperware container in her bag.  Her name is Brenda Schedrick and most CBI news is funneled through her.

Jane tells J.J. That Lisbon knows about the missing box. He swears that he didn’t tell her what’s inside and J.J. Is visibly shaking just knowing that she knows there even is a box. Lisbon convinces Brenda to come to headquarters because in spite of not having enough to hold her, if they don’t occupy her she’ll be diming J.J. Out to the press.

They take Brenda on a supposed drug raid and she wants to run back to the truck to warn the cartel boss by phone. Of course the truck is wired and they have her on video.  She cuts a deal for herself by turning in the cartel leader. J.J. Tells Jane that he keeps the box because it reminds him of how low a man can sink.

In the closing moments of the show, Lisbon pays a visit to a man who had raped J.J.’s mother 9 years ago. The guy still lives at home with his mother and she seems out of sorts as she calls her son down. Lisbon tells the man that she’d like to ask him a few questions about J.J. And the mother explains that her boy can no longer speak. He was knocked out cold years ago and when he woke he had no tongue! There’s an obvious a-ha moment for Lisbon as she realizes it must have been the tongue in that container all along!

Tune in next week for more of The Mentalist.