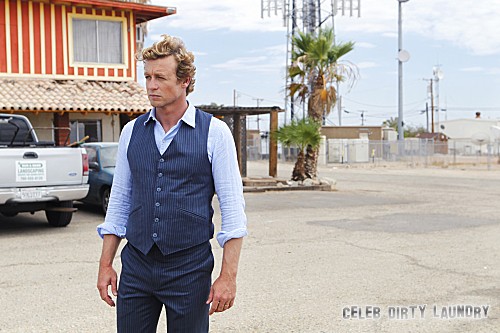 Tonight on CBS THE MENTALIST returns with a whole new episode called “The Desert Rose.” On tonight’s show Jane and Lisbon investigate the murder of a man who was missing for two years.  Did you watch last season’s finale? If you want to get caught up before tonight’s finale, we have a full and detailed recap, right here for you!

On last week’s episode just as Jane narrowed down the Red John suspect list to seven, Red John struck at a victim with links to Jane’s past, on the fifth season cliffhanger finale of The Mentalist.

On tonight’s show Jane and Lisbon secretly continue their dangerous mission to narrow down the list of seven Red John suspects as they investigate the murder of a man who was missing for two years. Michael Gaston returns as CBI Director Gale Bertram. Josie Davis guest stars as Sonya, a waitress at a truck stop, and Lauren Stamile (“Grey’s Anatomy”) guest stars as Madison Yardley, the murder victim’s wife.

Tonight’s The Mentalist Season Premiere is going to be exciting, and you won’t want to miss. So be sure to tune in for our live coverage of The Mentalist — tonight at 10PM EST! While you wait for our recap, hit the comments and let us know how excited you are about this season of The Mentalist.  Check out a sneak peek of tonight’s episode below!

RECAP: Patrick is sitting outside a building with Teresa, Teresa receives a call from the chief and tells Patrick that they’ve gotten a case. Patrick doesn’t want to work on this upcoming case, Teresa tells him that he doesn’t have to freak out and Patrick replies that he’s not freaking out. Teresa and Patrick arrive at the scene of the murder, Patrick is being pretty cold as he enters the room and is analyzing the room on this own. Patrick enters a bedroom that’s completely nice and tidy, he checks the closet checking what’s inside of it. He then walks over to the dresser and starts pulling out drawers to check them for clues, Patrick makes his way back into the living room and grabs a hand full of nuts. Patrick starts eating the nuts and starts talking baseball to the man who’s grieving, Patrick tells the man that he believes that he killed the love of his life. Patrick asks the man if he has any guns, Patrick wants to see the guns that the man owns and tells him how much authority he has and is able to do. The man shows Patrick the guns, Patrick takes a look and sniffs the first handgun. Patrick solved the crime, saying that Cody the man killed the love of his life because she was about to leave her. Patrick solved the crime due to the suit case he found, the drawer being messy and the jewelry and cash missing. Patrick believes that Cody buried it in the garden. Cody points a gun at Patrick and takes him as a hostage. Patrick thought ahead of time and put peanuts in the chamber, the gun is useless. Cody drops the gun and pulls out another from his back pocket and fires, and then is shot by several cops.

Patrick and Teresa are sitting in an office waiting for the chief, the chief isn’t planned about how the case ended up. The chief questions if he should suspend Teresa and Patrick or send them to a case farther away. The chief knows that Patrick is getting closer to solving a case and is wanting to know when he finds out. The chief tells both Patrick and Teresa to get out of town, in fact to go far out of time. Patrick tells Teresa that he’s thinking about trains as they make their way out of time, Teresa asks Patrick if they should share information about the list to others; Patrick says that they can not and mentions how he should of never told her. Patrick and Teresa make it to their destination, Patrick asks about how long the man’s corpse has been sitting at the crime scene for and it turns out for its been there for a long time. Teresa asks how long it’ll take for forensics to be done with the crime scene, the man Patrick is talking to is scared of him a bit, and Patrick knows. Teresa calls in to get more information about the man who was recently murdered, Teresa mentions that her and Patrick can’t leave until the case is solved. Patrick asks Teresa to slow down and make a turn to the right, because something caught his interest. They pull into a diner, Patrick and Teresa enter, Patrick orders a tea and some breakfast. Patrick asks if the people at the diner heard about the person who died, the woman at the diner looks very suspicious. Patrick is interested in what the woman mentions about her being psychic. Teresa admits to being scared because she hasn’t seen Patrick acting the way he is recently, Teresa wants to get help and Patrick doesn’t want any at all. Teresa calls Grace, but couldn’t talk due to the woman having some company at the time. Grace leaves to call Teresa back, Teresa talks about Jane’s list to her, she talks about Patrick not wanting anyone to know about it. Teresa ends up giving the seven names of the people who are on Jane’s List, though Patrick told Teresa not to do it.

The man who’s with Grace is starting to act weird due to feeling that Grace is being suspicious, Mike speaks to Madison about how the skeleton is indeed her husband. Madison isn’t surprised that her husband was found dead, Madison admits that she knows who killed him. Madison says that Aric Green was the man who killed her husband, due to her husband who was going to sue Aric. Madison’s step son arrives home, he’s not surprised about how he died. the step son speaks about how Madison could of killed her husband, because of how she didn’t love his father. Patrick is cooking eggs in the diner, he wants to show the man who cooks at the diner how he cooks his eggs. The man eats the eggs and is thoroughly impressed bu Patrick’s eggs. Teresa calls over Patrick, saying that Madison is suspicious and mentions about Aric Green. Teresa wants to go and talk to Aric Green with Patrick, but Patrick doesn’t want to go because the desert helps him think. Teresa leaves the diner to make a couple of calls, she ends up calling Grace about the people on Jane’s List. Mike and his partner meet up with Aric Green about the murder, Aric says that he payed him the thousand dollars he owed Mr. Yardly. Patrick is still at the diner, they’re talking about whether the shady business man, step son or the wife who’s the one who murdered Mr. Yardly. Grace is with Madison and the step son driving somewhere, while Mike and his partner have Mr. Green. Grace shows up with Madison and her step son at the diner to meet up with Teresa and Patrick. Before Patrick begins to talk, he wants to speak privately with Teresa and Grace. Patrick knows that Teresa told Grace, Patrick says that tracking the people on the list isn’t a smart move and that it will be used against them. Teresa is telling Patrick that she’s doing what she has to do because it seems that Patrick has no clue of what he’s doing. Teresa storms out and Patrick follows, Teresa gets in the car and drives of while Patrick was trying to talk to her.

Mike and his partner arrive with Mr. Green, Patrick talks to Mike and Grace. Patrick knows about Grace and Mike knowing about the list and Cho as well. Patrick doesn’t look to pleased to know that they know, Patrick, Mike and Grace enter the diner. Patrick asks Sonya to help out also with Cho coming into the diner. Patrick wants Sonya to choose who murdered Mr. Yardly out of the three suspects. Patrick is on a role and is ready to solve the case, he wants Sonya to close her eyes and think about Mr. Yardly while pointing at the letters in the menu. They keep going on and get Luke 12 27, which Green thinks it could reference the bible passage. Patrick mentions that Yardly had lilies on his grave and wonders how they got there and were watered. Patrick then solves the case that Mr. Yardly’s body was frozen and had seeds stuck to his body, so the water of the ice that melted helped the lilies to grow. It leads to the diner where the murder happened, Sonya was hit on by Mr. Yardly. Sonya went with him because of the money that she was offered, her boyfriend got pissed off and got the owner of the diner to help kill him. Patrick just checkmated the murderers and solved the case.

Patrick calls Teresa, but she doesn’t pick up. Patrick leaves a message for her, to let her know that he’s sorry for the argument. Teresa is trying to track down one of the people on Jane’s List. Teresa is getting ready to leave the office, she leaves and gets to the destination where she’s waiting for someone to give her some information on the case. It seems someone is hiding in the house behind her, it could be the person she’s looking for. Teresa slowly opens the door that lets out a creaking sound, she’s got her gun aimed outwards in case of anything that pops out along with her flash light to light the way. Teresa’s phone begins to vibrate while she’s there, Patrick is trying to call her. Teresa hears foot steps moving, she approaches the sound slowly and opens a door which has a bunch of pigeons sitting inside. Teresa enters the room slowly and sees a door that’s close, she makes her way towards it slowly. Teresa hears a noise that came from closet door, inside if it was Partridge who’s been wounded and is about to die. His last words were “Tiger”, Teresa is shocked and looks behind her the door that was closed is now open and she is pulled off screen. Patrick’s phone rings and the man who answers it is the killer, Patrick isn’t too pleased.