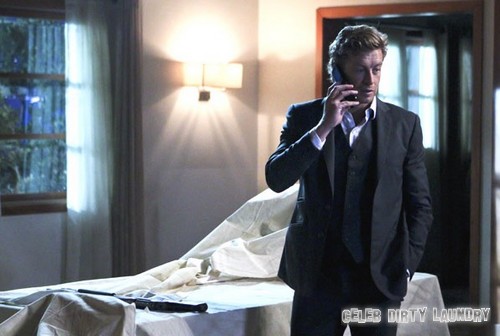 THE MENTALIST returned tonight and the hunt for Red John heated up as another suspect was eliminated.  I cannot wait to see next week’s episode.  As usual, we will be providing you with the juiciest, previews and teasers out there.  We have a sneak peek video and some insight for you below on what is going on next week’s episode 6, “Fire and Brimstone.”

On tonight’s show when a prominent member of Visualize was mysteriously killed, Jane investigated in the hopes that the case would provide a clue that would lead him to Red John.  Reed Diamond returned as Ray Haffner.  Did you watch tonight’s episode?  We did and we have a full and detailed recap, right here for you!

Spoiler alert: If you’re one of those people who doesn’t like spoilers, stop reading now! We have some juicy spoilers for you about the season 6 episode 6 of CBS’s “The Mentalist.”

CBS Official Synopsis: “Jane brings together the remaining Red John suspects after he gets a hold of the final clue, and he hopes this gathering will allow him to identify the elusive serial killer.”

On next week’s show the episode revolves around the cult group Visualize.  We learn much more about Visualize’s deeper connection with Red John, and whether Bret Stiles knows who Red John is, or is Red John himself.

The Mentalist Season 6, Episode 6 “Fire and Brimstone” airs on CBS on November 3rd, 2013. Check out the preview videos from episode 6 below and let us know in the comments below what you think!