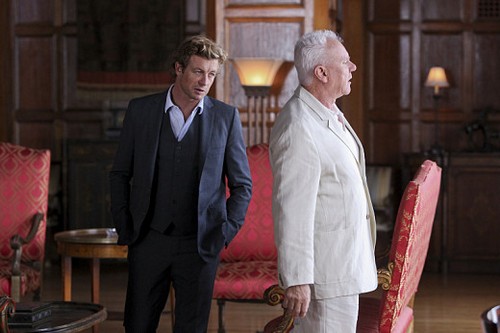 THE MENTALIST returned tonight and finally after six-years we are at the penultimate episode in the Red John story.  I cannot wait to see how it all plays out next week.  Good news, we have a sneak peek video and some insight for you below on what is going on next week’s episode 8, “Red John.”

On tonight’s show in the penultimate “Red John” episode Jane finally thinks he knows Red John’s identity.  But the truth may uncover a bigger lie. After gathering the five remaining suspects at Jane’s house he manages to narrow the Red John suspect list further and the CBI’s main priority becomes the remaining suspects.  Did you watch tonight’s episode?  We did and we have a full and detailed recap, right here for you!

Spoiler alert: If you’re one of those people who doesn’t like spoilers, stop reading now! We have some juicy spoilers for you about the season 6 episode 8 of CBS’s “The Mentalist.”

CBS Official Synopsis: “Patrick Jane finally comes face-to-face with Red John, the serial killer he’s tracked since the madman murdered his wife and daughter. For 10 years, Jane has doggedly hunted his nemesis in his search for justice.”

On next week’s the Red John saga is finally coming to an end.  The question is what happens now that Jane meets him.  We originally thought it was a forgone conclusion that Jane would kill him, but rumors have started that might not be the case.  However Simon Baker who plays Jane recently said, “The end of Red John was originally planned to take place at night on the street with people watching, but I pushed to do it in the daylight in a quiet, beautiful place where they could be alone. There is no human act more intimate — not even sex — than killing another human being and watching them die.”  What do you think CDLers is this the end of Red John?

The Mentalist Season 6, Episode 8 “Red John” airs on CBS on November 24th, 2013. Check out the preview videos from episode 8 below and let us know in the comments below what you think.