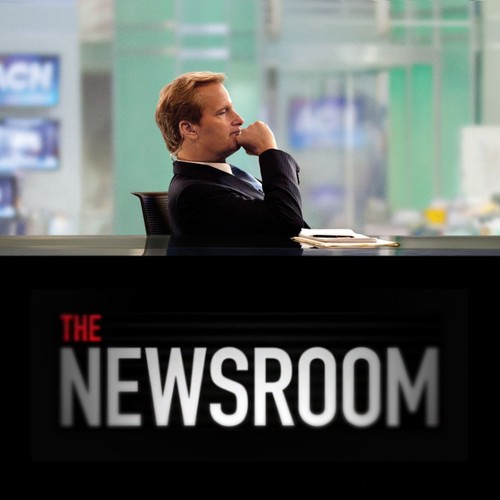 Tonight on HBO THE NEWSROOM continues with a new episode called, “One Step Too Many.”  On tonight’s show Jim gets unexpected company during his reunion with Hallie, who’s in town to cover a Romney rally.  Did you watch last week’s show?  We did and we have a full and detailed recap right here for you.

On last week’s show Will was distracted during his telecast by a phone call and an unflattering Twitter post. Charlie (Sam Waterson) got a visit from a longtime friend at the Office of Naval Intelligence, who had knowledge of Operation Genoa. Sloan (Olivia Munn) phased from humiliation to rage following a revenge posting. The newsroom traversed the slippery slope separating fact from fiction.

On tonight’s episode Mac and Charlie score a key witness, a retired Marine general, in their attempt to corroborate Jerry’s Operation Genoa story. Will follows Nina’s (Hope Davis) lead to soften his image by making an impromptu appearance on a morning talk show. Jim gets unexpected company during his reunion with Hallie, who’s in town to cover a Romney rally.

Tonight’s episode is going to be another great episode, which you won’t want to miss. So be sure to tune in for our live coverage of HBO’s The Newsroom Season 2 episode 6 — tonight at 10PM EST! While you wait for our recap check out the sneak peek video below of tonight’s episode!

At the First Team meeting, they’re discussing Operation Genoa. Separating facts from fiction. Am supposed extraction involved dropping gas on a village. Civilians weren’t taking into account. They suffered severe burning and many died. The U.S. soldiers may have also blocked the village from using any internet or radio frequency in order to keep the matter under wrap.

Jim is skeptical. He doesn’t believe the country would use illegal gas all of sudden. Even Don thinks they should be conscious but Mac is steaming ahead with the story and Charlie is backing her up. The Red Team is divided. Jerry believes in the story completely and Jim refuses to say his country could do such a thing.

But he sticks to the rules and doesn’t discuss what happened in the meeting to anyone else. Yet his girlfriend is coming in for work and he’s going to take her out to dinner as if nothing happened. But odds are that he will snap and tell her. Those same odds apply to everyone and Will.

Will doesn’t know about Genoa although that could be because he did a focus group on himself. It’s most likely from the tweeter last week. The one woman made an impact and so Will wanted to see how favorable he was with the audience. Sloan walks in on his wallowing doesn’t even bother asking how the focus group went. She already knows.

Watching his footage from the nigh, Will asked Nina how to bring his popularity back up. She suggests he smiles more and that he stops talking about religion. Yeah as if that’s going to happen when he’s as part of his job he has to get everyone’s viewpoint.

Charlie and Mac follow leads on Operation Genoa to a retired General. They want him to blow the whistle. They manage to get him to agree to an interview as long as his voice is changed and his face is blacked out. Still just as they were leaving the general asked how they found the story. They say a tip but the General doesn’t look like he believed them.

Jim’s dream date starts off already in trouble. His girlfriend invited along a woman from the campaign they were kicked off. Then there’s the girl she picked to double date with Neil. She’s drunk and she’s a fan of Rand Paul. That’s before Drunk Girl brings up Maggie Sex and the city escapade. Wasn’t that video supposed to b be removed.

Maggie is drinking alone every night is starting to looking more understandable. As Jim and Hallie are finally getting some alone time they run into Maggie at the bar. They all play nice and lie but these three know exactly what happened. The couple excuse themselves only to have the romance halted by work. Hallie is told she has to get on a plane for a morning debate. She leaves and Jim goes back downstairs to find Maggie.

He wants to warn her about drinking and letting it get to her head. Now that he knows about Genoa he doesn’t want Maggie to accidentally reveal it. Nevertheless she’s known for months without telling him. So she tells him she’s fine and then leaves with the bartender.

Will is getting desperate about his popularity. Nina tells him to distance himself from how Mac wants to do the news. Which only serves to make him miserable. He tried to do happy and fun morning news. He embarrassed himself. Thankfully he has Sloan who told him that doing the real news is what made him happy. Fake friends are useless.

It’s time for the big interview but the General isn’t admitting to anything. As a matter of fact he pretends to play what if. The story would have been scarped but it was only the General and Jerry in the room. So immediately afterwards Jerry took the tape and edited to his thought with the General admitting to using gas.

He made sure to fix the raw footage as well. The story would be huge. The network would receive praise and everything. Unfortunately none of it was true. Charlie found that out much later.