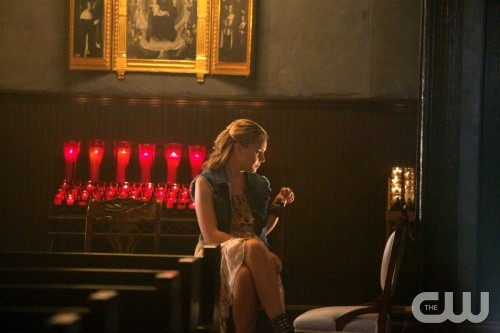 On episode 4 of THE ORIGINALS called, “Girl in New Orleans” Marcel is headed to see Davina who is happily taking the dagger out of Elijah’s chest just to ram it back in (teenage witch angst isn’t it to adorable?)

Klaus is with Cammie. He is discussing the ancient story of good and evil. Klaus tells Cammie he came to New Orleans looking for answers. Klaus tells Cammie he enjoys talking with her. Cammie tells him he needs professional help. Klaus tells Cammie he would like to hire her as his ghost writer for his memoirs. Klaus also tells her as a added bonus it will give them time to discuss her and Marcel. Cammie tells him when it comes to her and Marcel he can mind his own business thank you very much. Klaus goes on and tells Cammie about the war Marcel and his vampires are waging against the witches. Cammie gets upset and Klaus glamours her and tells her not to be afraid. Cammie ask him how he does that. Klaus tells her its a old magic trick used by vampires (and Criss Angel.) Klaus promises to explain it to her after they have a discussion about Marcel.

Speaking of Marcel he is explaining to Davina that he is giving Elijah back to Klaus, plus the Originals are immortal and can’t be killed. Davina is more concerned with the fact that she wants to go to the street fair that night. Marcel answers with a hell no. Davina reminds him that she is the powerful one and with that she makes his blood boil. After a few drops of sweat Marcel chickens out and gives Davina her way under some conditions one being that she will stay with someone of Marcel’s choosing at all times.

Klaus is with Cammie again. Cammie ask why when they are together she remembers everything they previously talked about but when he is gone she can’t remember anything. Cammie also tells Klaus that Marcel is bringing a girl to the festival with him. Klaus leans in close and tells Cammie under different circumstances that they could be friends. Klaus then tells Cammie she is going to Marcel and offer to help him by watching the girl for him at the street fair.

Agnes and Rebekah are on Haley about getting a checkup and making sure the baby is okay. Haley explains that everything is fine and that it is unsafe for her to risk seeing a doctor anyway. Agnes tells Haley she found a doctor in the bayou who will see her. Haley relents and agrees that she will go later that day.

Rebekah is using google to try and find Elijah. Klaus walks in and makes fun of her. Klaus then tells her that he thinks Davina is acting out against Marcel and that he needs a way to win Davina over.

At Marcel’s some of his day walkers are enjoying a afternoon snack. Rebekah shows up and explains that she has a history with Marcel and was wondering if he is seeing anyone. Diego tells her if it isn’t the bartender it will still be someone close by the Quarter.

Haley and Agnes are at the bayou doctors. Haley doesn’t like where it’s at . Agnes convinces her to go in. As soon as Haley does Agnes makes a suspicious phone call.

Davina is watching the band at the bar and is interested in the violin player Tim. Cammie and Marcel talk for a minute and she tells him her shift is almost over and she will be spending the rest of the night with Davina.

Rebekah walks into a church and ask the Father where the attic is, at first he doesn’t want to tell her but she glamours him and he does. Rebekah soon realizes that Davina must be staying there. (I’m still shocked that witches and vampires can walk into churches). When Rebekah gets up to the attic she finds Elijah’s coffin and opens it, Elijah pulls Rebekah into a dream sequence of some kind. He tells her to look around and see if she can find anything that will help explain just how powerful Davina really is. Elijah also makes her promise to protect Haley and the baby. Elijah is just pretending that he is still be asleep.

The doctor tells Haley that the baby has a strong heartbeat and that or is fine. The doctor leaves to get some medicine for her. Before he comes back Haley sees people outside coming for her, she fights off the doctor and gets away.

Klaus finds Tim in a alley and glamours him into sending a message for Davina to meet him at the church.

Davina and Cammie arrive at the church. Tim is happy to see her and ask if she is going to be coming back to school. Davina tells him she misses hearing him play the violin. Tim takes it out and plays a beautiful song for her.

In the back of the church Klaus and Cammie are talking. Cammie tells Klaus how her brother was the one who killed all the three people at the church. Her brother Sean was sick and she couldn’t help him. Klaus tells her that she needs to leave the church and dance and have a good time and forget about being with him tonight.

The Father finds Marcel at the street fair and tells him that Rebekah was at the church asking a lot of questions. Marcel gets upset and threatens the Father. About that time someone comes up to Marcel to inform him that Diego lost Cammie and Davina.

Klaus walks over to Tim and Davina and tells Tim he needs to sit down. Klaus cuts straight to the chase and tells Davina she has picked the wrong side and that with Klaus she would be free and not a prisoner. Davina decides she will make Klaus’s blood boil. Klaus grabs Tim. Davina tells Klaus not to hurt him. Klaus tells her to join his side. Davina instead decides to use her power instead.

Haley is getting chased through the bayou. Rebekah shows up and they both start taking the chasers out. They both soon realize there are more coming. Rebekah gets hit with a arrow and goes down, Haley soon follows.

Davina wakes up and runs back into the church to look for Tim.

Rebekah calls Klaus and tells him what happened with Haley. Klaus tells Rebekah to keep looking for her and that he is on his way.

Tim begs Klaus not to kill him. But Klaus is unfortunately out of time and throws him over the railing, Klaus makes sure Tim’s violin follows.

Davina finds Tim laying there dying. Klaus tells her if she will join up with him he will save Tim’s life. Davina agrees and Klaus gives him some of his blood. Davina turns towards Klaus but he is already gone.

Klaus finds Rebekah and ask her about Haley. They hear a howl and see Rebekah. Rebekah tells them that the wolfs kept her safe. Klaus is mad and says the witches will pay. Rebekah tells him that Elijah has a plan and that just need to protect Haley. Haley starts to fall and Klaus catches her and carries her to the car, Rebekah is right behind him.

Marcel is jumping all over Diego for losing Cammie and Davina. Diego decides to be a smart mouth and get in Marcel’s face. Marcel rewards him by snapping his neck.

Rebekah shows up and tells Marcel that she wants Elijah back. Marcel ask her if that all she wants and then tells her he found his queen. Rebekah tells Marcel he will always want her. Marcel goes towards her but then at the last minute turns and walks away.

Klaus is at Cammie’s. Cammie is again talking to him about her brother. Cammie wonders if a vampire made her brother do all those things and that’s why she is there she wants to find out. Klaus makes her forget even though she begs him not to. Klaus tells her to get some sleep and dream of a world without demons and vampires and where everyone wants to be good. Klaus is teary eyed while doing this.

Davina is at home and she goes to Elijah’s coffin and sees that it’s empty. Davina turns around and Elijah is standing behind her. Elijah tells her they need to talk.

If you want a sneak peek of next week’s episode, check out the preview of episode 5 below!