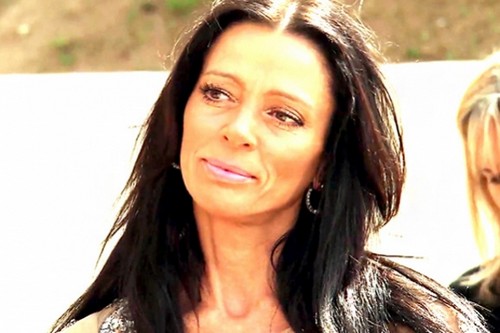 THE REAL HOUSEWIVES OF BEVERLY HILLS returns to Bravo tonight for a whole new episode called, “Life’s A Witch.” On tonight’s show The ladies dine at Carlton’s gothic manor, with Lisa’s faint and the rumors about Mauricio on the menu for discussion.  Did you watch last week’s premiere episode?  We did and we recapped it right here for you.

On last week’s show Brandi, Kim, Kyle and Mauricio showed up to support Lisa and her sexy dance partner Gleb on Dancing with the Stars. Meanwhile, Yolanda faced a surgical procedure in her efforts to battle Lyme disease. Kyle hosted a lunch for new friends, Joyce and Carlton, but the meal goes awry when Kyle encouraged the killing of a bee, offending nature-loving Carlton. Brandi’s mother visited from Sacramento and helped her settle into her new home. Kim and Kyle watched Lisa’s next dance performance, questioning the sincerity of Lisa’s infamous faint.

On tonight’s show Carlton hosts the ladies for a luncheon in her gorgeous, Gothic mansion, which sports “Victorian balls,” a spooky doll collection and black cats. When Lisa shows up to the lunch a little late, teasing from her friends about her suspect faint proves too much for her after recently being eliminated on Dancing with the Stars. Kyle upsets Carlton by asking too many questions about witchcraft, but Kyle finds herself on the defense when Brandi prompts the ladies to talk about the tabloid accusations about Mauricio cheating.

Tonight’s episode of The Real Housewives of Beverly Hill opens with Joyce and her friend Ivette, the winner of her beauty pageant are on their way to the children’s hospital. They are on their way to a jewelry store to get a crown for the pageant queen. After the trip to the jewelers Joyce heads home to spend some time with her two sons and her husband Micheal. She thinks she is “truly blessed.”

Carlton is busy rearranging furniture with the help of her son’s nanny Lizzy. They are getting the house ready for her lunch date with other housewives. She wants to try to get to know them better.

Yolanda’s Doctor is paying her a house call, he specializes in holistic medical treatments. She is still fighting the Lyme disease, she thinks she is at about 70%. She is discussing New York with her daughter Gigi, she will be leaving to go to college in NY soon. Yolanda gets emotional and sheds a few tears, she is already thinking about how much she will miss her.

Brandi is at a date with her boyfriend J.R. Brandi thinks he is a “pain in her ass,” and she is so used to him being around, but she breaks up with him. J.R. is actually okay with her dumping him. Brandi has some serious trust issues, and since he went on a trip to Texas without telling her, she thinks she can’t trust him anymore. He still drives her home after she dumps him though.

Lisa is on her way to rehearsal at Dancing With The Stars. She doesn’t want to go though, she is exhausted and still doesn’t feel well. She is eliminated from DWTS, and then reporters ask her if she faked fainting. She still swears that the faint was real. Pandora and her husband Ken join her in her trailer after her elimination to cheer her up, she is not upset though, she is happy she is done with DWTS.

Carlton and her nanny Elizy are getting ready for her lunch date with the girls. Yolanda arrives at her house first. They chat about their kids. Joyce, Brandi, Kyle and Kim share a limo to Carlton’s house. On the way they discuss Lisa’s elimination, they all think she faked her faint. They arrive at Carlton’s house and they are all blown away by how amazing her house is. Joyce thinks it is like a “baby castle.”

Kyle and Yolanda still have some tension between them, since their argument at the Chamber of Commerce. Carlton isn’t much of a fan of Kyle’s either, Kyle begins questioning her about her religion and it offends her.

Lisa arrives at Carlton’s house. All of the girls rush to hug and greet her, despite the fact that they were all just making fun of her. Brandi tells her that Kyle and Kim think she faked fainting (even though she was saying it right along with them). Lisa is upset. And, Kyle is upset because Brandi threw her under the bus.

Kyle questions Carlton about being a witch. Carlton is not happy that she put her on the spot in front of her company. She does practice Wicca, but Kyle made it seem really negative and she doesn’t practice dark magic. Kyle continues to question Carlton about the crosses in her house, and her husband, and their relation to the Chamber of Commerce. Things get even more awkward when Brandi slips up and uses the word c**t while they are eating lunch. Lisa is upset, and offended, but Carlton is totally okay with her using that language in her house. She is however grossed out when Joyce says something only half as vulgar.

The conversation gets even more awkward when Brandi asks Kyle about a story in the tabloids about her husband cheating on her. Kyle insists that the story is completely fake. Brandi thinks she is in denial, because when stories came out about Eddie cheating on her, she thought they were fake, and they turned out to be true.