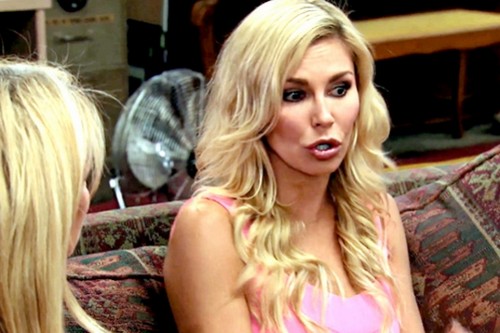 THE REAL HOUSEWIVES OF BEVERLY HILLS returns to Bravo tonight for a whole new episode called, “Irked At Cirque.” On tonight’s show While mastering circus school, Brandi and Kyle face off over bullying accusations and Joyce and Lisa butt heads.  Did you watch last week’s premiere episode?  We did and we recapped it right here for you.

On last week’s show Carlton hosted the ladies for a luncheon in her gorgeous, Gothic mansion, which sports “Victorian balls,” a spooky doll collection and black cats. When Lisa showed up to the lunch a little late, teasing from her friends about her suspect faint proved too much for her after recently being eliminated on Dancing with the Stars. Kyle upsets Carlton by asking too many questions about witchcraft, but Kyle found herself on the defense when Brandi prompted the ladies to talk about the tabloid accusations about Mauricio cheating.

On tonight’s show hoping for an afternoon of fun, Kim invites the ladies to a funky and colorful circus school, but tensions simmer as Brandi believes Kyle has labeled her a bully to the tabloids. Later, Lisa suddenly finds herself in the drama when an accusation by Joyce leaves her and the other ladies totally baffled.

The sexual tension between Brandi and Carlton is certainly something to see. The two women have become fast friends. They’re both free and open to all sorts of things. Sure there is the light flirtation but this friendship appears to be like finding like. If you need a crazy fun girl at the party be assured there is now two.

Kim has taken up lessons at circus school. She thought it would be a light fun for her to possible do with the other girls down the road. Although looks can be deceiving. Suspending yourself mid-air actually is much harder than Kim thought it would be.

Kyle is excited about Kim’s idea. She’s even hoping one of the girls gets put in a cage with a lion. Otherwise she has a double date with Joyce and their husbands. The two couples really like each other. But their date gets thrown when Kyle sees another report in the media about her family members. For her it’s just one time too many. There are the girls claiming they slept with her husband and people creating lies about her nieces. It just never seems to stop. Joyce has history with this back when she was Ms. Puerto Rico. Every other day lies were getting written about her so instead of snide remarks (Lisa) she automatically states if Kyle believes her husband then so does she.

Yolanda is suffering from an emptier nest. Her daughter Gigi is almost gone and yet Yolanda can’t stop herself from already mourning her loss. This Gigi’s last summer at home before she goes to school in New York in the fall. In the meantime she’s doing her best to teach her daughter all she needs about surviving on her own. Yolanda doesn’t raise her kids to live on their trust funds. They need to go out and work.

Lisa and her husband love their dogs. She did also admit she might even treat her dogs better than her children. That’s why when Ken surprised her with a new dog she acted as if he gave her diamonds. She loves dogs and wouldn’t stop kissing (on the mouth) her newest acquisition.

The time has come for Kim’s circus school gathering. Everyone is attending and it wouldn’t be unusual if there was drama among them. To begin with Kim spoke with all the girls. She told them today is supposed to be fun. No drama allowed! Yolanda and Brandi said sure they understand and instantly Kim is offended she got caught off. She called Yolanda out for being rude thereby muting the point she made earlier.

Later on the drama continues this time with Kyle. Brandi was out with her kids the other day when the paparazzi confronted her. They said Kyle had said Brandi was a bully. Brandi is hurt by this because she feels if anything she was being helpful recently to Kyle. Brandi was harping about this without discussing it with Kyle in order to “lessen” the drama but Kyle caught on. She went to Brandi and had it out. No she never called Brandi a bully and she semi-apologizes. Yet Brandi doesn’t believe her. Once her kids got mixed up in this then she won’t feel alright unless Kyle were to make a public apology.

The tension never goes away after their “fun” day at circus camp. Yolanda had to leave to help Gigi with her prom so it’s up to Brandi and Lisa to have her back when Kim brings her up at their lunch. Carlton who doesn’t understand the history didn’t think Yolanda was being rude but she does give lead way to say maybe was happening that she was unaware of. All she knows was that she momentarily uncomfortable. Brandi says they shouldn’t be talking about this unless Yolanda was here to defend herself and of course that upset Kyle. She knows Brandi had brought her up when she wasn’t there.

Brandi and Lisa say they believe her that she never called them bullies however Kyle can truly prove that by right up a single tweet discounting rumors. Kyle says she can’t. She has other pressing matters to deal with besides using a couple of seconds to write a tweet.

In other news, Joyce tried to make herself count by telling Lisa that she was offended she was brushed off earlier. Then she made the mistake by saying Brandi and Yolanda told her Lisa doesn’t take criticisms well. Basically she tried to throw people under the bus and only looked silly for it. Maybe int time she’ll learn how to fight in the big leagues.