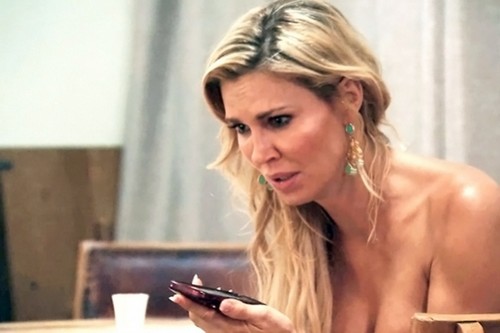 THE REAL HOUSEWIVES OF BEVERLY HILLS returns to Bravo tonight for a whole new episode called, “Escape to Bitch Mountain.” On tonight’s show Kyle finds unexpected comfort in Palm Springs, while Brandi breaks down as her dog goes missing.  Did you watch last week’s episode?  We did and we recapped it right here for you.

On last week’s show the ladies traveled to Palm Springs for a girls’ bonding trip and Kyle was surprised when Carlton confronted her about a list of issues. As the group relaxed by the pool, Brandi revealed that she and Carlton made out, much to Carlton’s chagrin. When questioned about her pentagram tattoo, Carlton finally reveals she is a practicing Wiccan, eliciting eye rolls from some of the women. Brandi riles up Joyce by repeatedly calling her Jaclyn, amongst other things and the group dinner goes downhill quickly when a tipsy Brandi picks a fight with Kyle.

On tonight’s show as the Palm Springs trip continues, Brandi wants Kyle and Yolanda to resolve their Paris issues, but Kyle leaves the table in tears, and unexpectedly it’s Yolanda who winds up comforting her. After a day of fun, the mood is shattered when Brandi learns her beloved dog, Chica, has gone missing.

Brandi had gone too far while being too drunk. She intervened in the fight between Yolanda and Kyle thinking she was being a good friend but the things she said were simply mean. She told Kyle she had a habit of freaking out like a crazy person on people. Kyle never thought she was like that and even Yolanda won’t back Brandi’s statement. No, Yolanda prefers to excuse herself from the table. She won’t say anything against her friend but she doesn’t believing in kicking Kyle when she’s down.

She later finds Kyle tearing up in the back. Putting her personal feelings aside, Yolanda comforts Kyle after Brandi’s attack. Eventually she leaves Kyle to her sister’s hands. But when Lisa tries to be there for Kyle she gets turned away by Kim of all people. All night long, Kim has been feeling like Lisa kept dismissing her. So what do you know she snaps. She told Lisa to stop pretending like she didn’t matter.

According to Lisa, she allowed Kim that victory just to end things. But she doesn’t believe she was in the wrong and only acknowledging wrong doing in order to get Kim to shut up. Kim, for her part, has made peace with Yolanda and the very drunk Brandi. They are away from home and why not make the best of things. Everyone does make peace by time “bed time” rolls around because after such a nasty dinner, the ladies just want to have fun. Kyle and Joyce enjoy the pool while Brandi enjoys flirting with Carlton.

This is their vacation and that is how they want to enjoy it. Except Lisa decides to be a party pooper. She doesn’t want Brandi to drink anymore and so she took a bottle away from Brandi. In return, Brandi asks her not to strategize for tonight. Yolanda sees trouble from that comment because she knows where Brandi is coming from. Lisa has a habit of arranging things to fit however way she wants them to. That’s what Brandi meant by “strategizing”.

Both Yolanda and Lisa are leaving the vacation early. Not because of what happened on day 1. In case anyone thought they were running away from the conflict then they should know these women have to leave for prior commitments.

Day 2 of this “getaway” requires the women to go on the tram. Certain women can’t take the heights but they quickly learned to adjust. Particularly when they hear a full functioning bar is waiting at the end of it. Carlton and Kim were able to start a friendship though so at least something good came out of this trip. Both women enjoy being around animals and went as far as to petting a couple of rabies-ridden squirrels. That freaks all the women that aren’t as in tuned with nature.

Carlton is the bug whisperer. When they found a large bug in the house they immediately called Carlton knowing how she loves to say she has infinity with animals but apparently that doesn’t stretch towards bugs. Carlton was freaked when she saw the size of whatever insect that thing was. She still got it out of the house before she let it loose and screamed her way back inside.

Carlton pulls Brandi aside to talk. She was upset when Brandi brought up their kiss in front of everyone. She felt it was personal and if anyone was going to reveal that then it should have been her. Carlton really likes Brandi although she’s not sure if she can trust Brandi with any of her secrets. They’re still good but Brandi’s been warned.

Kyle, Kim, Joyce, Carlton, and Brandi are all having dinner together again and this time the atmosphere is peaceful. There is no drama. That is until Brandi gets a call from home. Her house got burgled and her dog has gone missing ever since. She’s upset and the moment Joyce opens her mouth; Brandi lashes out. The women leave her to cry it out but they don’t fully leave her. They wait right outside her room in case they’re needed.

Brandi had to leave the house early to go looking for her dog. Like Kyle said, when her kids are with their father then her pets become like Brandi’s children. She had to go see if she can get Chica back.