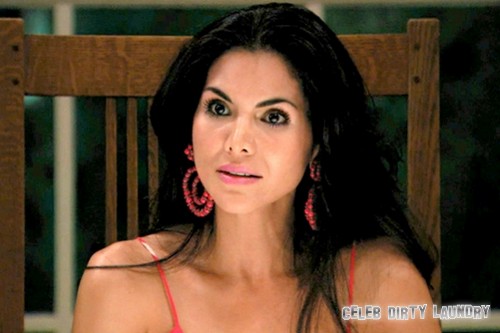 THE REAL HOUSEWIVES OF BEVERLY HILLS returns to Bravo tonight for a whole new episode called, “Palm Spring Breakers.” On tonight’s show the Wives head out on vacation, but Brandi might have been overserved during the antics and lashes out at Joyce.  Did you watch last week’s premiere episode?  We did and we recapped it right here for you.

On last week’s show Yolanda’s mother and brother visited from Holland, just in time to see Yolanda’s husband, David Foster, got his star on the Hollywood Walk of Fame. Kim, Kyle, and their sister, Kathy, attend the high school graduation of Kim’s daughter, Kimberly. Brandi revealed a secret about Carlton that left Lisa speechless.

On tonight’s show the ladies travel to Palm Springs for a girls’ bonding trip and Kyle is surprised when Carlton confronts her about a list of issues. As the group relaxes by the pool, Brandi reveals that she and Carlton made out, much to Carlton’s chagrin. When questioned about her pentagram tattoo, Carlton finally reveals she is a practicing Wiccan, eliciting eye rolls from some of the women. Brandi riles up Joyce by repeatedly calling her Jaclyn, amongst other things and the group dinner goes downhill quickly when a tipsy Brandi picks a fight with Kyle.

Brandi is excited. She got signed on for another book and because the last one was all about her she figured the next one would have some input on other people’s sex life. Her consensus group is working out although they are worried about Brandi’s fetishes. Wanting to get choked to the point she grasp for air is something her friend of 20+ years didn’t know before.

Joyce is doing something a little more tame with her friends. She’s going through her full closet and slightly showing off. She loves shopping and couldn’t wait to show anyone and everyone her “amazing finds. Kim is actually focusing on the group trip. She’s out shopping for essentials instead of getting lost in her closet.

Kyle is also preparing by going shopping with Carlton. She asked Carlton because the two haven’t spoken since that minor dispute on the rooftop. The argument wasn’t between them but she wanted Carlton to be at ease. Carlton takes this opportunity to say what made her uncomfortable. By which she means every little thing she didn’t like Kyle doing. It was a list and by the end of it Kyle had formed an opinion. Carlton likes to look for trouble.

The trip to Palm Springs is underway and the group in whole have split into threes. Kyle, Kim, and Joyce enjoy each others’ company. Especially when they happen to arrive at their destination first. This means they have a pick of the best rooms. The situation is familiar to Lisa. The last group trip Kyle had picked out a room for her. It was basically cupboard and Lisa hated it.

This time she gets a cottage that happens to be the farthest away from the main house. Poor Yolanda that’s stuck with her can’t help that they don’t get the best beds. For one no one ironed her sheets. Carlton and Brandi are also stuck in close quarters. Yet they can’t really complain because the trip was arranged by Joyce.

Later, Brandi accidentally keeps messing up Joyce’s name. She calls her Jaclyn. The two names don’t sound alike at all but that won’t stop Brandi. She originally didn’t want to start trouble with Joyce or so she claimed.

At the pool, some of the women begin stripping down to their bathing suits to enjoy the pool but Joyce doesn’t want to go in despite being the host. Yolanda and Brandi try to convince her but she called it peer pressure and made Carlton get defensive. Yolanda goes into the pool to entice her when Joyce admits she can’t swim. Brandi thought she could make a joke and chose the wrong one. After hearing Joyce couldn’t swim she said “you’re a black person”. Wrong joke that deeply offended Joyce. Kim and Kyle were stunned into silence afterwards.

The trouble continues on to dinner. Brandi hasn’t let go of calling Joyce by the wrong name and Joyce won’t take it anymore. She explains she was bully for her name when she was younger. Lisa clears it up by saying Brandi wasn’t bullying and that shouldn’t offend anyone. This leads to people taking sides. Made even worse by the fact Brandi keeps drinking. She doesn’t stop calling Joyce by the wrong name and drunkenly stated she doesn’t like the name Joyce. It doesn’t fit a young and beautiful woman; she feels it stands for a big fat pig. No worries she doesn’t like her own name either.

Kyle thinks Brandi is being incredibly rude and while Yolanda is attending the drinker somehow their old argument comes up. The one where either Kyle and her sister are lying or Yolanda is lying. Joyce tries to jump in but Yolanda shushes her. Joyce is angry that she got shushed at her own dinner. Yolanda is explaining third parties don’t jump in when they don’t know the story.

There goes a nice dinner.