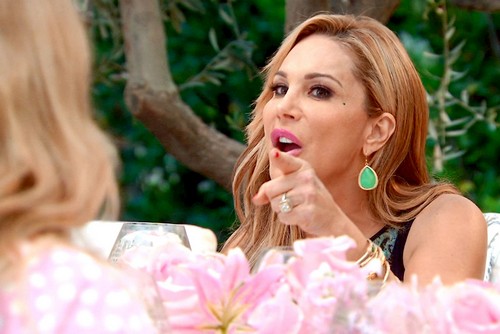 THE REAL HOUSEWIVES OF BEVERLY HILLS returns to Bravo tonight with a whole new episode called, “Game of Scones.” On this week’s show Adrienne and Brandi come face-to-face (and to blows) at Lisa’s tea party. Did you watch last week’s show? We did and we recapped it here for you.

On last week’s show in Las Vegas, Brandi entices all the women (except Adrienne, who stayed back in LA) to try pole dancing, with varied success. Upon learning Kim is about to go under the knife for her nose job, the women wondered if going under anesthesia and taking pain killers is wise for a woman just out of rehab. The final dinner in Vegas started pleasantly, but the moment Adrienne’s name is mentioned, it devolved into a feud in which new issues were raised, and old wounds were opened.

On tonight’s show Kyle pays a visit to Lisa’s to discuss the mutual hurt in their relationship: Lisa is upset Kyle doesn’t defend her, and Kyle says Lisa holds a grudge. A truce is reached, but it’s not exactly resolved. More unresolved issues are addressed when Lisa throws a tea party in her beautiful olive grove, and it’s the first time Adrienne and Brandi have faced each other since their big blow-up. It’s civil at first, but denials and accusations fly when a tipsy Taylor asks whether or not Adrienne is suing Brandi.

Tonight’s episode begins with Kyle deciding to head over to Lisa’s house to mend fences, as usual. The last time we saw these ladies Camille accused Lisa of not owning her restaurants and Lisa was pissed that Kyle didn’t stand up for her. Kyle didn’t feel like Lisa needed her to save her and apologizes for letting Lisa down. Kyle believes at the root of every fight is ultimately Brandi but Lisa isn’t buying it. Apparently Lisa is extremely hurt that Kyle didn’t have her back and she believes that Kyle’s behavior has hurt their friendship.

Yolanda likes an honest girl and so she has become fast friends with Brandi. Yolanda invites her out to the horse farm and they discuss all of the drama that is swirling, especially the crap with Adrienne. Brandi is worried about the letter that Adrienne’s attorney sent to hers, basically telling her to shut her mouth or else. Yolanda is not a fan of Adrienne’s already and totally pep talks Brandi through the idea of surviving Lisa’s tea party with all of the girls.

The tea party is basically going to be a test spot to see if Adrienne can be welcomed back into the group without an all out war starting. Adrienne shows up with Faye Resnick and Brandi is about to lose her mind. She knows that at some point the crap will all hit the fan and it’ll be two against one. Kim was supposed to attend but in true Kim fashion, dreams up an excuse to blow off the party. This time around her new puppy hit her new nose and she’s hurting too much to attend!

The girls seem to be having a good time for awhile but as always, at some point things always turn a bit ugly. Lisa calls Brandi into the kitchen and checks to see how Brandi is holding up. Lots of innuendos  have flown but Brandi is keeping her cool. Adrienne’s attorney sent her attorney a letter threatening a lawsuit and while sitting at the table Adrienne is in complete denial of the entire situation. She swears that none of it is true but Brandi calmly informs Adrienne that she has the letter with her.  She is fed up with feeling like she constantly has to prove herself to all of the ladies and it looks like things will come to a head on next week’s episode!