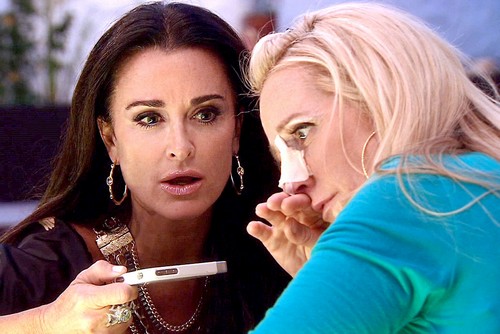 THE REAL HOUSEWIVES OF BEVERLY HILLS returns to Bravo tonight with a whole new episode called, “White Part Pooper.” On this week’s show Kim reveals her new nose with a party, while Taylor reveals that she’s in love. Did you watch last week’s show? We did and we recapped it here for you.

On last week’s Kyle payed a visit to Lisa’s to discuss the mutual hurt in their relationship: Lisa was upset Kyle didn’t defend her, and Kyle says Lisa held a grudge. A truce was reached, but it was not exactly resolved. More unresolved issues were addressed when Lisa threw a tea party in her beautiful olive grove, and it  was the first time Adrienne and Brandi have faced each other since their big blow-up. It’s civil at first, but denials and accusations fly when a tipsy Taylor askedwhether or not Adrienne was suing Brandi.

On tonight’s show Kim reveals her new post-surgery nose with a party in her backyard. When Taylor calls to say she won’t be attending, Kim and Kyle are shocked — not just because Taylor is jetting off with a new love, but because she doesn’t know where her daughter is. Later, Adrienne gets angry with Paul because he won’t evacuate their home when Lisa’s old house is in flames across the street. They make up in time for Kyle’s white party, however, and are a united front when everyone confronts them about their threatened lawsuit against Brandi.

Tonight’s episode begins with drama and for once it’s not related to Brandi. Kim is throwing a party to celebrate her sobriety and so Kyle shows up with her daughter and with Taylor’s daughter Kennedy. Taylor is supposed to meet them there. Instead she calls Kim and tells her that she’s not coming because she’s in love and jetting off for the weekend. Kyle asks if she should keep Kennedy and Taylor didn’t even know that she had her! Taylor is clearly smashed on the phone and had no idea where her child was, but she knew she was heading for the airport with some random guy!

Kim chooses this party as her opportunity to take the bandage off and unveil her new nose to all of her friends. Only in Beverly Hills!  The next day Adrienne and her family are pool side when the realize that Lisa’s old huge estate is on fire. Plumes of smoke and flames are shooting. Adrienne gets the kids and animals in the car to leave because she’s afraid they are too close. Paul refuses to get in the car with them. Adrienne declares it a really bad choice on his part not to come with the family. This moment is obviously huge in terms of their split.

The couple later joins everyone at Kyle’s home for her annual white party. Without fail, things always go bad here. Adrienne and Paul are in their car driving and I’m pretty sure that Paul is going to flip out on Brandi. Taylor shows up and gushes to Kim about how great her three days trip was. Kim is looking for a hint of remorse from Taylor for ditching her kid but its not there. Not even close!

Brandi can’t take the stress any more regarding Paul and Adrienne and so she sends her friend to ask Adrienne to talk. Of course it all goes to hell and turns into a three-way fight at Kyle’s party. Brandi presents proof that Adrienne’s helper is selling stories about her and Paul  is not happy. Meanwhile Lisa  likens the whole situation to what happened last year. Last year Russell sent a letter of intent to sue and he was not allowed in the party. Now Paul is threatening Brandi but Kyle isn’t making him and Adrienne leave. Very valid point, there is a double standard.

Tune in next week as the fight clearly will escalate.