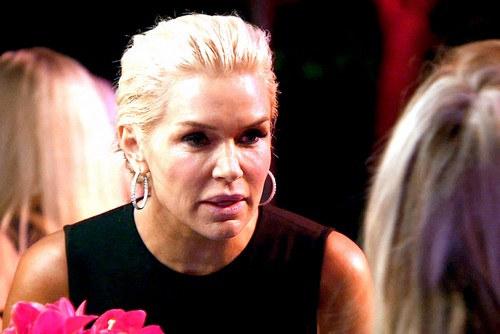 THE REAL HOUSEWIVES OF BEVERLY HILLS returns to Bravo tonight with a whole new episode called, “A Vodka Shot Through the Heart.” On this week’s episode Adrienne and Paul separate, while Brandi and Faye face-off. Did you watch last week’s show? We did and we recapped it here for you.

On last week’s episode the ladies’ trip to Paris wrapped up with a boat ride down the Seine River, and an unlikely bond formed between Kim and Brandi. Back in Beverly Hills, Lisa began planning her housewarming party/vow renewal with flamboyant party planner Kevin Lee, and Kyle scurried to prepare for her boutique opening. In a changing room during the big event, Kyle and Kim discussed Kim’s erratic behavior in Paris, and Kyle wondered if she’ll ever be able to trust Kim’s sobriety.

On tonight’s show Adrienne throws an eye-popping party to launch her new vodka line, but her relationship with Paul worsens, even as Paul tries to impress her by dressing up as a tree. News of their separation reaches the shocked women as they head toward Lisa’s housewarming party/vow renewal. Drama develops quickly, as Brandi confronts Marisa about talking behind her back. Things get uglier when Brandi’s enemy Faye interrupts. Trouble is clearly about to ensue.

Adrienne is launcher new Vodka line, Zing. She wants the party to reflect the brand’s decadence. She keeps bossing the staff around. Paul says it’s a typical day and typical insults which he is used to.

Brandi comes over to see Lisa. They are happy to miss Adrienne’s party. Brandi says she wasn’t invited but it’s the last party she’d want to go to since she’s always promoting something. Brandi says if you’ve been to one party, you’ve been to them all. They both agree that she is not happy in her life. Brandi says Paul & Adrienne do not have a happy marriage and that it’s more business.

Brandi puts Jake in between her legs. Ken comes to say hi to Brandi and Lisa. Ken gets on top of Lisa and humps her.

Camille says that Adrienne always goes over the top big for her parties. Kyle shows up for the party. Yolanda says that Adrienne wanted to do vodka shots right away but that’s jus not her cu of tea. Paul has a fake tan sprayed on him. Marisa shares attest she got from Brandi advising her on how to save her marriage, which includes a “hall pass”. Adrienne says that Brandi is not the one to be giving marital advice. The women start discussing why Brandi’s marriage failed. Yolanda thinks Marissa is trying to throw Brandi under the bus. Kyle doesn’t think Brandi would go with a married man after she was cheated on. However, Faye says that Brandi cheated at Kyle’s white party. Yolanda says she shouldn’t make comments without seeing it with her own eyes. Faye and Adrienne feel that Brandi has thrown all of them under the bus. Adrienne and Camille trash Brandi for her cattiness.

Lisa is shocked that Paul and Adrienne announced their separation online today. Lisa is now planning a party of her own. She makes some demands of her planner, Kevin; she puts up with him because he’s brilliant and delivers.

Brandi and her friend Jennifer get into a limo to see Lisa’s new house. She wonders if Adrienne will come because of the marriage announcement. Brandi is not surprised but she thinks it’s a publicity stunt given all the rumors around them.

Kyle feels sorry for Adrienne and Paul since they don’t have any privacy during this separation.

Yolanda told Brandi about the gossip that was said about her; that she’d sleep with all of their husbands. Jennifer is shocked. Brandi is disappointed in Marissa; if she had an issue, she should have come to her and not those catty bitches.

The guests start to arrive for Lisa’s housewarming. Brandi says she’s hoping to behave herself but makes no promises. Brandi says she’d only flirt with Ken. Brandi says that Adrienne is behind every negative story that’s put out behind her on RadarOnline. Lisa thinks it’s very suspicious.

Taylor says that getting a divorce in Beverly Hills is rotten. All of the other women continue to gossip about Adrienne & Paul and how Brandi may have made the problems worse.
Brandi confronts Marissa about why she was talking behind her back. Yolanda says that Marissa was stirring the pot while Marissa tries to backpedal. Marissa says that there’s no problem with her marriage.

Marissa says she jokes around but it doesn’t mean her marriage is in trouble. Camille wants to know why Yolanda and Brandi are attacking Marissa. Faye decides to jump into the conversation and refuses to honor Brandi’s requests to leave. Faye says that Brandi is leading Yolanda down a bad road. Yolanda says she is 48 years old. Faye says that no matter how many Chanels Brandi borrows, she will never be a lady. Brandi and Yolanda leave.