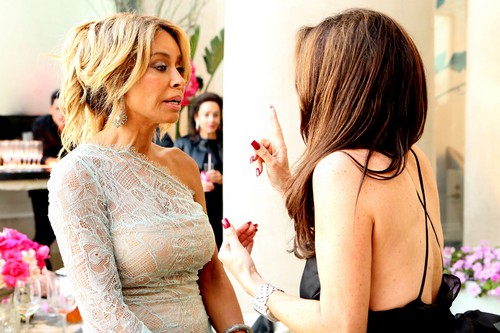 THE REAL HOUSEWIVES OF BEVERLY HILLS returns to Bravo tonight with a whole new episode called, “Finale.” On this week’s episode Faye takes on Lisa at her vow renewal ceremony, while Adrienne leans on the ladies for support.  Did you watch last week’s show? We did and we recapped it here for you.

On last week’s episode Adrienne threw an eye-popping party to launch her new vodka line, but her relationship with Paul worsened, even as Paul tried to impress her by dressing up as a tree. News of their separation reached the shocked women as they headed toward Lisa’s housewarming party/vow renewal. Drama developed quickly, as Brandi confronted Marisa about talking behind her back. Things got uglier when Brandi’s enemy Faye interrupted. Trouble was clearly about to ensue.

On tonight’s show While Lisa prepares to renew her vows after thirty years of marriage, her housewarming party plummets downhill. Faye picks a fight with Lisa, and when all the ladies get involved, Lisa realizes Kyle will never have her back. Kyle is not safe from Kim’s ire either, but luckily Lisa and Ken’s vow renewal ceremony interrupts the drama for one lovely moment. And when a tearful Adrienne shows up, on the very day her separation has been announced, some of the women stand behind her, while some are not as sympathetic.

Tonight’s episode is going to be filled with the usual Housewife drama and you won’t want to miss it, so be sure to tune in for our live coverage of the show tonight at 9 PM EST! While you wait for our recap hit the comments and let us know what you think of “The Real Housewives of Beverly Hills” season 3, so far!

Lisa’s Vow Renewal has finally arrived. Let the drama begin. It was just revealed that Adrienne separated from her husband and fingers are already pointed at Brandi. Faye in particular has caused drama by jumping in a supposed fight between Brandi and Marisa. However instead of getting Marisa’s back, over Brandi’s advice of giving of Marisa and her husband getting hall passes (sleeping with other people with repercussions), she instead verbal attacked Brandi.

But Faye isn’t done yet. She accuses Lisa of using Brandi as a guard dog to attack the other girls. Lisa thinks all these insults are sounding familiar and most likely coming from Kyle. As their fight escalates, the other girls take notice. Still when attending a party don’t insult the hostess.  Especially when she’s surrounded by friends.

When begins Faye attacking Lisa, bit by bit the other housewives join the fight. Repeating hearsay about Brandi and calling Lisa manipulative gets the other girls riled up but where is Faye’s back up? Kyle does arrive but remain silent while her “friend” gets surround in enemy territory.

She does somewhat try to her a friend. It could help though if Faye would stop calling the party boring and refusing to leave.  Walking away from the crowd Faye still isn’t going anywhere meanwhile the group is trying to analyize why Faye keeps gunning for Brandi when Kyle says “it’s because what you did to Adrienne”. Not mentioning any of what Brandi did to her own sister, Kim. Kim feeling hurt that no one is sticking up for her gets in an argument with Kyle whom she feels is acting insensitive.

Keep in mind that Kim is mad about people talking about her alcohol and drug use but looking like she fell of the wagon yet again.

Whereas there’s drama in different corners of the one party, Lisa tries to remain upbear over her 30yr anniversary. Only for Adrienne to show up. If you’re going to attend don’t cry and have breakdown. Either be strong enough to attend or stay home and cry it out. Don’t become center of attention at someone else’s party.

She doesn’t greet the hosts but instead builds her own support group in one of the sitting rooms. Well she’s not getting any sympathy from Yolanda or Marisa. They both think Adrienne should have stayed at home.

On the other hand, Adrienne feels like Lisa is being cold hearted when the hostess doesn’t travel over to her to offer her sympathies on the break up.  She ended up leaving in body and not in spirit. Nevertheless she makes sure her friends/minions carry details about the break up over to the rest of the housewives. Holding in their opinions, Yolanda and Lisa ask questions but neither makes any movements towards a phone.

Adrienne may have only been at the party for about 30 minutes tops yet the repercussions are only going to make the party go downhill quickly.  To have fun and be considered insensitive or to turn an Anniversary into a sympathy party for someone else? Poor Lisa.

She doesn’t feel like she could be happy over her vow renewal and wants to hide in her room when Brandi comes in to help her. Despite Brandi’s reputation for crazy, she manages to talk Lisa into going through with the renewal and to be happy about her own situation.  Making her a very good friend.

The Renewal is sweet and funny and even Kyle is crying. It doesn’t stop her from referring to Adrienne but luckily only in her confessional. Everyone is happy that a strong marriage can exist and preserve.  Particularly when they look at the divorce rate for all the housewives.

The epilogue goes well for everyone.

Yolanda is getting treatment for her Lyme disease.

Lisa is on Dancing With the Stars.

Taylor is dating a man not yet divorced so she’s technically the other woman.

Kim and Kyle are doing better.

The Party may have ended on a high note but then again there’s still the reunion. You know the part where everyone finds out what really was being said by their so called friends. It going be like the party but 2.0.