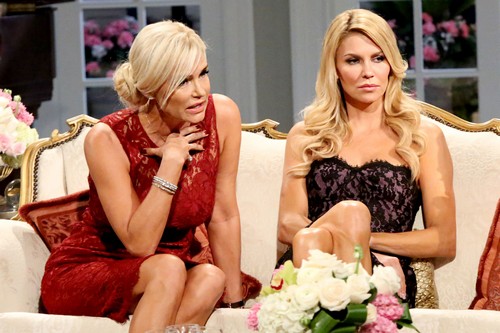 THE REAL HOUSEWIVES OF BEVERLY HILLS returns to Bravo tonight with a whole new episode called, “Reunion Part 2.” On this week’s episode Andy and the ‘Wives get even more dramatic, with Kim and Yolanda facing off.  Did you watch last week’s show? We did and we recapped it here for you.

On last week’s episode in the Reunion Part One, the women gathered with Andy Cohen to discuss the year, settle old scores, and clear the air. . . but Adrienne Maloof’s decision not to attend sparked the initial controversy — and led to a shocking announcement. Other surprises were revealed in the hour: Yolanda felt unwelcome when she joined the group, Taylor admitted to drinking too much, and Lisa and Kyle’s touchy relationship became even more dramatic when Yolanda, Kim, and Brandi stepped in with their take on the battle.

On tonight’s show still on their hot seats, Lisa and Kyle wrap up a painful discussion about their relationship — with little resolution. The group dishes about the shocking allegations followed Adrienne and Paul’s divorce, while Mauricio explains his passionate stance in the Brandi/Adrienne conflict. And despite three seasons of a reality show (and being sisters their whole lives), there is still anguish and tears as Kim and Kyle discuss Kim’s first year of sobriety, and the difficulty Kyle has in trusting her.

Tonight’s episode is going to be filled with the usual Housewife drama and you won’t want to miss it, so be sure to tune in for our live coverage of the show tonight at 9 PM EST! While you wait for our recap hit the comments and let us know what you think of “The Real Housewives of Beverly Hills” season 3, so far!

Where we last left them, Lisa took Yolanda’s word over Kyle. Lisa explains that she knows Yolanda and doesn’t think her friend would talk behind her back.

Andy moves the conversation along towards Adrienne’s marriage. He admits he was surprised that the bickering escalated into divorce. Kyle says she was also surprised but Lisa cuts in with the fact that Adrienne’s husband has moved out several times over the years. Brandi admits that looking at the marriage she never saw any love between them.

As the conversation turn towards Adrienne’s new relationship with Rod Stewart’s son however both Kyle and Brandi agree it’s an odd coupling.

Yet when Andy mentions the allegations of abuse, Kyle is defending Paul while Lisa is saying “you never know”. Andy asks Taylor about her own abuse and did Adrienne ever reach out to her. She talked about how Adrienne never showed her any support when she was going through her own marriage much less try to reach out.

Kim and Kyle’s relationship is put under the microscope. Kyle admitted this past season that she’s still working on trusting her sister. After looking at the footage though Kim is extremely hurt that Kyle didn’t support her. She feels Kyle has her back when their together but when their apart Kyle throws her under the bus. Lashing out every person who didn’t support her she moves on to Yolanda.

Kim is hurt that after supporting her Yolanda asks her questions over her drinking and memory.  In the middle of their bickering Brandi joins in to support Yolanda.  Going as far to say that Yolanda even carried Kim’s sh*t stained pillow through the airport.

Andy quickly changes the subject only to move on to more heated topic. He asks Brandi about Kim and Kyle’s relationship. She starts out by saying that she doesn’t think it’s a close relationship only to drop the bomb moments later when she accuses Kyle of wanting  and being happy for Kim to fail in her sobriety. Even Taylor gasped.

Kyle is hurt and crying while Kim admits she doesn’t have in her to make it another round especially if Kyle has abandoned her. The sisters who have moved closer together are finally hashing it out with Kim forgiving her sister. Brandi also apologizes to Kyle for her comment.