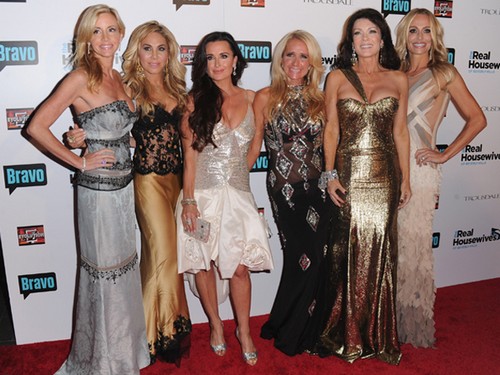 Tonight was the final of The Real Housewives of Beverly Hills.  Did you watch the show?  We did and we recapped it here for you.  Not is is time for the Reunion show – Part 1.  Adrienne has decided to leave the show. Kyle and Kim are ready to point the blame at Brandi. When Andy Cohen questions Brandi over the feud; she remains unapologetic and ready to defend herself. Not afraid to admit she’ll cut a bitch though only ends up riling Kyle and Kim.

Adrienne, who although not there, remains a very sore subject.  Moving on to the other housewives, Yolanda is asked about certain things she said. Like the lesbian comment about her daughter and honestly telling a worker “you need to learn English”. There is no filter for her and she admits that.

However honesty never does well on the Real Housewives. Kim confronts Yolanda about making her look unreliable. Currently looking much better (sober) than she did at the party. When Yolanda keeps insisting that it wasn’t her intention but they did in fact make plans. Hmmm…

The fight against Yolanda doesn’t end with Kim but instead begins between her and Taylor. Taylor apologizes for unfairly judging Yolanda before she met her when it brings up if that was that one of her “moments”. Her most infamous “moment” was not knowing where her young daughter was. She tries to defend herself by saying it was a nanny mix up. Although that doesn’t explain her increased drinking this season.

What might be a partial explanation was the creditors at her door that had already confiscated some of her property. She seems to be in a better place for the reunion with her in a new relationship with a man not divorced yet. Something Brandi is not too pleased about. Yet the boyfriend lives in Denver. Long distance is notoriously bad for a relationship but for right now it’s just what Taylor needs.

The tension between the Richards sisters and everyone else begins to heat up yet again.

Leave it to Andy who loves to stir up trouble to bring up the cold war between Lisa and Kyle. Lisa talks about how Kyle never sticks up for her and how she’s only close to Adrienne because of business.  Lisa then goes on to agree with Andy that her relationship with Kyle changed after Kyle sold Lisa’s house.

Kyle on the other hand feels like she’s been replaced with Brandi. Whom can’t help to state that maybe you shouldn’t talk behind Lisa’s back.  Kyle wants to fight for her relationship with Lisa and surprisingly doesn’t want to fight with Brandi over it. They instead both agree, Brandi and Kyle, that there has never been fight between them and that they’ve had moments that were good. But why does Yolanda have to go and ruin the rare moment of goodwill?

Yolanda brings up how catty and two faced Kyle is and kyle fight back by bringing up what Yolanda said in Paris. Though Yolanda is denying it, Kyle reveals that Yolanda was talking crap about Lisa.  The sisters back each other with Kim agreeing with Kyle about how Yolanda is fake.

It’s time for Lisa to side with Kyle or Yolanda and she decides to believe Yolanda. Andy hammeres in the point for next week’s promo by asking Lisa does she believe Kyle is a liar and Lisa said YES!

In next week’s promo, after Lisa’s comments, Kyle and of course Kim go on the attack. No two sister could fight like these two one second and ten defend each other to the death in the next. Brandi, Yolanda, and Lisa should be worried.