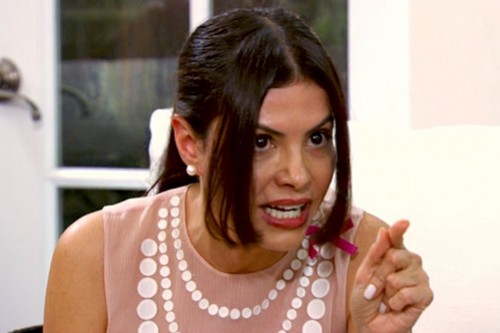 Tonight on Bravo THE REAL HOUSEWIVES OF MIAMI premieres with its 3 season called “’Hurricane Adriana.” On tonight’s show Adriana and Lea’s feud comes to a boiling head when the two finally meet.. Did you see last week’s season 3 premiere episode?  We did and we recapped it right here for you.

On tonight’s show Miami’s hottest Housewives were back with a vengeance but alliances had changed and friendships had been shattered as longtime friends Adriana and Lea dealt with the fallout from the scandal of a life time. When Lisa tried to get the group together to make amends, a shocking secret was revealed. Former Housewife Alexia Echevarria rejoined the ladies of the 305 to make things even hotter.

On tonight’s show the black clouds are rolling in as Adriana and Lea’s feud comes to a boiling head when the two finally meet in a stormy showdown. Joanna’s trip down the aisle may be in jeopardy after Romain pops a question of a different sort. And Lisa discovers that buying their dream property on the hottest island in Miami has become more like a nightmare.

Tonight’s episode is going to be filled with the usual Housewife drama and you won’t want to miss it, so be sure to tune in for our live coverage of the show tonight at 9 PM EST! While you wait for our recap hit the comments and let us know how excited you are to have “The Real Housewives of Miami” back! Also we have a sneak peek video of “Hurricane Adriana” below!

Joanna is still adjusting to Miami when her man says he’s house shopping. Not necessarily for kids just yet but maybe next year. Right now though they need to focus whether they want to get married in Miami or in L.A. Also they may have to re-advise their guest list. He doesn’t like how her sister is so critical of him. Still that is her sister and Joanna won’t be choosing between them anytime soon.

How did the conversation go from lovey dovey to talks about pre-nups. Sometimes these housewives refuse to think things through. Joanna doesn’t understand why her fiancé is talking about a pre-nup. To her that’s like saying they’re going to fail. He then hits back with how she’s left several times before so why should the future be any different. If that’s how they feel about each other then why bother getting married.

Marysol went running with Alexia when the other woman’s asked about her mom. Her mom hasn’t been doing so well and Marysol is soon in tears. One of things holding her together are her friends.

Adriana and Federic are in bed together when he tries to talk to her. She’s too upset to talk thing through. He did call off the wedding and that hurt her. To make it worse the whole ordeal winded up in the paper. It was written by a close friend of Lea. Lea has commanded her presence over to her house and hopefully Adriana believes they can clear the air.

Lisa finally got word on her new house. They can tear down the home that’s there and rebuild their dream home. However her maid won’t be making the trip with her. She’s taken a more supervisor role so she no longer cleans home personally. Lisa is very close to her and continues trying to change her mind about retirement.

When you have too much money the silliest things seem to matter. Alexia is currently entranced about her custom made closet. She’s turning it into a mini-boutique.
Despite all of the drama Adriana is going through with her over the wedding. She gave her party planner 6 weeks to make her dreams happen. She’s out shopping for her wedding and her once best friends isn’t with her. Lea is out with Lisa and Joanna while Adriana is with Alexia and Marysol. The two groups are both talking about each other.

Each woman is claiming to be hurt and betrayed but how will they rebuild their friendship with both of them believing they shouldn’t apologize. Someone has to. Their sons are close. The kids shouldn’t have to suffer because of their moms.

The main source of contention for Lea is that Adriana got married without telling her. Adriana says she doesn’t feel married so facts don’t matter. She’s hurt because she feels that Lea went to the papers about her and that Lea is constantly throwing her face how much she helped Adriana in the beginning.

Lea also throws in her face that she and her friends paid for Adriana’s son’s tuition. Lea was supposed to have done this as a friend yet Adriana can’t comprehend why she keeps bringing up all the financial help now.

The fight continues next week with both women making their friends choose sides? How ugly is this going to get? Can’t these women book operations together or something? That could help them bond.