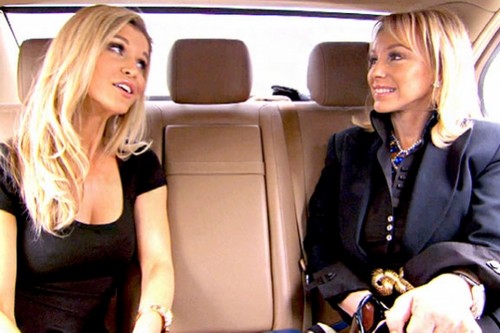 Tonight on Bravo THE REAL HOUSEWIVES OF MIAMI premieres with its 3 season called “’Til Lies Do Us Part.” On tonight’s show Miami’s hottest Housewives are back with a vengeance, but alliances have changed and friendships have been shattered. Did you see last season’s season 2 reunion episode? We did and we recapped it for you!

On tonight’s show Miami’s hottest Housewives are back with a vengeance but alliances have changed and friendships have been shattered as longtime friends Adriana and Lea deal with the fallout from the scandal of a life time. When Lisa tries to get the group together to make amends, a shocking secret is revealed. Former Housewife Alexia Echevarria rejoins the ladies of the 305 to make things even hotter.

Tonight’s episode is going to be filled with the usual Housewife drama and you won’t want to miss it, so be sure to tune in for our live coverage of the show tonight at 9 PM EST! While you wait for our recap hit the comments and let us know how excited you are to have “The Real Housewives of Miami” back! Also we have a sneak peek video of “Til Lies Do Us Part” below!

The show begins with Joanna being picked up from the airport by Lea. The two women chat about Joanna planning her wedding in a couple of months. Lea is happy that Joanna is getting married it will give her stability. Then the talk switches to the news that Adriana has actually been married to Frederic for five years. Both of the women were shocked, especially Lea who tried to help Adriana because she thought she was a single mother. Then Lea recalls out Adriana did not defend her at over the summer when Ana was attacking Lea verbally. Adriana joins alliances with women who don’t like Lea and she is heart-broken by it.

Ana, Alexia, Marysol and Lisa are invited by Adriana to go to a bridal expo. Adriana is of course late so the topic turns to how she is already married to Frederic as well as Adriana not defending Lea. Finally Adriana arrives and Lisa brings up the whole Adriana being married already subject, she is being a good friend. She explains, in confessional to viewers that a few weeks into them dating he wanted to marry her. However her son Alex, who was nine at the time freaked out and two weeks before the wedding Frederic called it off. By this time the paperwork had already been done and Adriana want to explain it to her son at the time.

Thanks though to the media he found out that she and Frederic were already legally married because of the marriage license. Then it flashbacks to the two of them looking at the boat he is building and they argue about the wedding four years ago. She is pissed that it all came out in the media. The two continue to fight even though he apologizes for calling off the wedding. She walks away as she says she is tired for being judged for his mistakes. Adriana complains about having to deal with her friends and the press.

After that flashback it comes back to present day where she is explaining to Ana, Alexia, Marysol and Lisa. She reveals that she does not feel married because they have a license but it was not done under the eyes of god. Lisa ells her she just wanted her to have the chance to explain it. Lisa also thinks that Lea and Adriana need to talk.

Lea drops Joanna off at a Bentley dealership where Romain is waiting for her at a dealership; he bought her a brand new Bentley. The two are very lovey dovey and she is grateful for how far they have come in the last year.

Alexia picks her son up from his physical therapy. He was in an accident that left him hurt. His cognitive skills are still healing and he is still recovering. They take a visit to go see Alexia’s mother who has moved to Miami to help Alexia with Frankie. She is not your typical grandmother that is for sure but she is a psychiatrist. Peter, Alexia’s other son is there for the family get together as well. The group talks about how difficult Frankie’s accident has been on Peter.

Lea is having her house redecorated but only told Roy she is doing a little touch up. The two designers come to discuss what she wants to do with the ballroom. She brings out the artwork for the designers to sift through; including some from Adriana she bought to help her with the money.

Lisa at home getting ready for a little girls dinner that she hopes will go well and get Adriana and Lea back on track as friends. Joanna is the first to arrive and Lisa tells her that Joanna never calls her. Joanna defends herself and reveals she and Romain have set a date. They also talk about Lisa’s desire to have a baby and not be able to carry a child. She opens up that they may use a surrogate. Next to arrive is Marysol and the three ladies catch up. The topic turns to sex and Joanna reveals she can’t remember the last time she and Romain had sex.

Marysol tells her to just figure out the problem after they are married. Adriana arrives next and things are icy between her and Joanna. They say hi but barely shake hands. Alexia is the next guest to arrive and wonders where Lea is. Soon after Lisa drops the bomb that Ana was not invited but Lea is still not coming. Lisa wants all the women to clear the air. Joanna defends Lea and Adriana gets mad saying Lea knew the whole story about her being married. Adriana reveals she is mad that Lea decided to side with Joanna in a fight and Adriana is mad.

Things get heated as Adriana goes off on a tangent about what a bad person Lea is and Joanna gets mad. It becomes a back and forth about the same old fight with Joanna and Adriana. Marysol interrupts with the news that her mother is not doing well and she would wish to be sitting with them having a cocktail and all the women are doing is fighting. Turns out Marysol’s mother had a hemorrhage in her brain and is going to be in the hospital for a while. She is touch and go. It calms down the fighting and the women agree all the arguing is nonsense especially with the weddings coming up. After that bombshell is dropped the women seem to make peace and enjoy a cocktail together for the time being anyway.