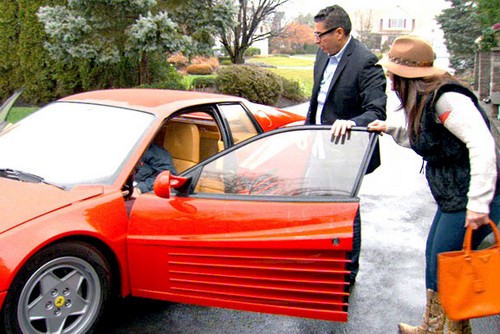 Tonight on BRAVO our favorite Housewife show THE REAL HOUSEWIVES OF NEW JERSEY returns with and all new episode called, “It’s My Party and I’ll Fight If I Want to.” On tonight’s show Teresa’s father gets admitted into the ICU just in time for Gia’s 12th birthday party.  Did you watch last week’s crazy newepisode?  We did and we recapped it here for you!

On last week’s show after an awkward afternoon with Teresa, Melissa was motivated to sell her house and move away from her sister-in-law. Kathy’s son, Joseph, tested her patience but it’s her husband who needed a time out. The Lauritas hosted a poker night but all bets are off when a surprise from Chris left Jacqueline in tears. Caroline and Teresa faced off in a heated exchange that puts Caroline in the hot seat.

On tonight’s show Teresa’s father gets admitted into the ICU just in time for her daughter, Gia’s, 12th birthday party. Kathy plays the tough guy with her family but can’t erase the damage done by what she said to Teresa. Caroline returns to her Franklin Lakes mansion to find it’s turned into a pig sty. Meanwhile, Jacqueline checks in with her new friend, Melissa, but can’t save her when a little white lie makes Teresa see red!

Tonight’s episode is going to be filled with more Housewife drama that you won’t want to miss, so be sure to tune in for our live coverage of the show tonight at 8 PM EST! While you wait for our recap hit the comments and let us know how excited you are about the new season of The Real Housewives of New Jersey! Also we have a sneak peek video of tonight’s season 5 episod3 below!

I think this season it’s already pretty clear that Caroline has rethought her behavior last year and decided that she wants to take on the role of peace maker. She tells Jacqueline that she met with Teresa and that Tre is still holding a major grudge. At this point Jacqueline could care less what Teresa says or feels, she’s over it all.

I thought Joe Giudice never spent time alone with his kids but I guess if a camera follows him and Gia to get a snack, well then it’s good. He’s trying to talk to Gia about boys and not making out with them. It’s one of the most awkward scenes ever and just seems to be exploiting a whiny Gia. Her 12th birthday is coming up and Teresa is throwing her a huge bash which is causing issues galore.

Melissa is going to the party with the kids but Joe Gorga feels sick just thinking about attending. At the same time they are all worried about Teresa and Joe’s father who needs a pacemaker put in. Teresa also won’t make up with Kathy so she and Melissa bond over the messes in the family. They wait for Jacqueline to join them at the gym.

Kim D is still in the picture this season. After helping Teresa to launch striippergate last season she’s still spending quality time with Tre.  As all of the other girls were at the gym, Teresa’s friend Linda calls Tre to play spy. Of course Teresa gets catty and insists that these girls don’t belong at HER gym.

Teresa has all of her girls at the salon getting their hair done for Gia’s birthday and Melania flips out on Tre and tells her to be quiet and zip it. She then bops over to Gia and basically pushes her buttons, asking Gia if she feels bad knowing that her uncle won’t be there. These girls are the most disrespectful brats on television for sure.

When the party finally rolls around Gia ups the brat ante and becomes more obnoxious then ever.  Kim D is at the party when Melissa arrives at the party and starts grilling her on being at Teresa’s gym. Kim also shames Melissa for not going to the hospital to visit her father-in-law. Melissa sets her straight and insists she was there but Teresa insists that she wasn’t there.

Melissa is mad that Teresa is calling her out and trying to make her look bad in a public place once again.  Gia actually walks up to them and tells them to stop fighting. Melissa ends up taking her kids home about ten minutes after they arrive. Tune in next week for more drama!