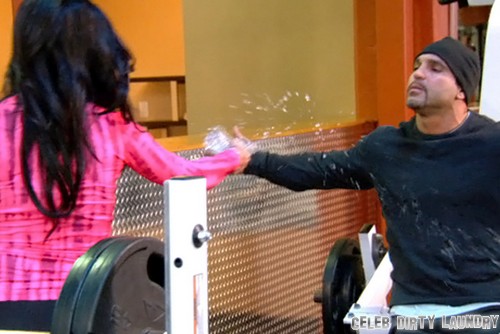 Tonight on BRAVO our favorite Housewife show THE REAL HOUSEWIVES OF NEW JERSEY returns with and all new episode called, “Gym Rats.” On tonight’s show Teresa heads to the gym to blow off some steam but loses her cool during a run-in with her brother.  Did you watch last week’s crazy new episode?  We did and we recapped it here for you!

On last week’s show Teresa’s father got admitted into the ICU just in time for her daughter, Gia’s, 12th birthday party. Kathy played the tough guy with her family but could not erase the damage done by what she said to Teresa. Caroline returned to her Franklin Lakes mansion to find it was turned into a pig sty. Meanwhile, Jacqueline checked in with her new friend, Melissa, but could not save her when a little white lie made Teresa see red!

On tonight’s show crazy is in the air as Teresa heads to the gym to blow off some steam but loses her cool during a run-in with her brother, Joe. Kathy throws a joint birthday bash for her husband, Rich, and daughter, Victoria, but Caroline drops a bomb that causes one guest to completely meltdown. As Melissa stuggles with a dark secret from her past, Jacqueline releases some stress with her trainer over unresolved issues with Teresa.

Tonight’s episode is going to be filled with more Housewife drama that you won’t want to miss, so be sure to tune in for our live coverage of the show tonight at 8 PM EST! While you wait for our recap hit the comments and let us know how excited you are about the new season of The Real Housewives of New Jersey! Also we have a sneak peek video of tonight’s season 5 episode 4 below!

Tonight’s episode begins with Melissa and Joe discussing the mess that was Gia’s birthday party. Obviously Teresa tries to start drama at every turn, including her daughter Gia’s party. She decided to split hairs with Melissa over how many days it took Melissa to high tail it to the hospital to see Tre and Joe’s father. What I’ve learned from this scene is that Melissa does a fabulous impersonation of Teresa when she’s upset.

Caroline’s sons are super excited to be opening a restaurant in Hoboken. They are still putting things together and Caroline and Albert stop by to taste some of the potential food. They’re still figuring out the menu and they insist that it has to be perfect.

Melissa is working on her book at this time and she is trying to figure out how much of her past she wants to discuss. Her father would go out for milk and come back days later and she just doesn’t know how many details she should go into. He was a fantastic father but a horrendous husband and she doesn’t know which side to tell. Meanwhile Jacqueline decides to work out with a trainer at home and the poor chick looks utterly uncomfortable listening to Jacqueline bitch about Teresa.

Teresa treats her mom to a mani/pedi and during the pampering she asks her mom what to do about the situation with her brother. Of course mom takes shots at Melissa, saying she looks like a hooker. Maybe this is where Teresa gets it from.

Kathy is throwing a double birthday for her husband Ritchie and their daughter Victoria. She decides to do it in style and get a party bus. Melissa fills everyone in on Gia’s party and Caroline thinks that Teresa is completely incapable of being civil to either Melissa or Kathy. Caroline tells Kathy that as of now there’s no hope of mending fences with Teresa at this point and to just keep moving.

Rosie is half in the bag at the birthday bash and is outwardly drooling over a hot, married brunette.  Somehow she does manage to get a kiss out of this chick as her husband looks on!  Of course whenever Ro drinks too much she gets sloppy. She hears about Teresa’s feelings about Kathy and freaks out completely until someone makes her leave.

A lot of the last two episodes revolves around Teresa’s gym. She wonders why Melissa was at her gym so imagine her shock when Joe turns up there. Teresa approaches him and they go rounds. Joe stays fairly calm while Teresa starts freaking out. She’s getting that high pitched shriek when Joe tells her that she can’t cook, her parents cook and she takes pictures of it.

Of course Teresa tries to say she’s basically innocent of everything while Joe totally puts her in her place. He asks her how her loser husband treats her or her four girls and at this point I don’t think Teresa can even see straight. He runs down the list of Joe Giudice’s offenses and wishes that he could go back and prevent Teresa from marrying him. It ends with them storming off. Tune in next week for more Real Housewives of New Jersey.