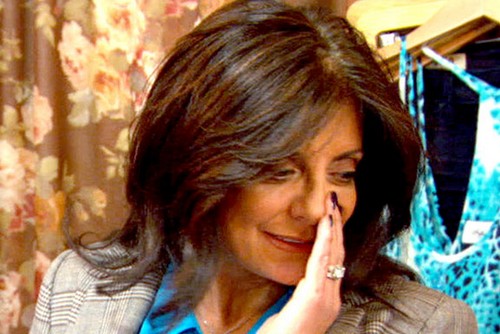 Tonight on BRAVO our favorite Housewife show THE REAL HOUSEWIVES OF NEW JERSEY returns with and all new episode called, “Drinking with the Enemy.” On tonight’s show Teresa enlists Rosie’s help to plan a healing retreat. To get caught up for tonight’s crazy episode if you missed last’s week, you can read our full and detailed recap, right here.

On last week’s show tempers flared between Joe and Melissa over accusations Teresa lobbed (along with her water bottle) at the gym. As Jacqueline dealt with a crushing setback with her son, Caroline feared her kids were following too closely in her husband’s shoes. Meanwhile, Richie overstepped, sparking the wrath of Kathy, and Rosie extended an olive branch to Teresa. But all bets were off when the unpredictable cousins face-off.

On tonight’s show the dirt is rich in the garden state. Cheating rumors surface about Melissa, and an awkward exchange between Caroline and her husband, Al, unearths new feelings. Meanwhile, Teresa enlists Rosie’s help to plan a healing retreat that could bring her face to face with her old friend, Jacqueline. Kathy tries to stay downwind from the stink, but the entire trip has her calling foul.

Tonight’s episode is going to be filled with more crazy Housewife drama that you won’t want to miss, so be sure to tune in for our live coverage of the show tonight at 8 PM EST! While you wait for our recap hit the comments and let us know how excited you are about the new season of The Real Housewives of New Jersey! Also we have a sneak peek video of tonight’s season 5 episode 6 below!

The conference on Teresa isn’t going well. Caroline doeesn’t want to be involved, she felt she gave her best and that was that

Teresa is at home with her family. Her eldest daughter is having some issues but nothing can ruin her good mood.Her dad is out of the hospital and came to her house for dinner. The only thing that doesn’t make the situation perfect is that her brother can partake in their dad’s happiness. Where’s her brother? He’s at golfing practice with Richie. Meanwhile his dad is up and making sausages with Teresa’s daughters.

Seeing her dad doing so good she attempts to make peace with her brother. She calls him to invite him to a retreat where they can hopefully talk. Joey wants to say no but the fact he didn’t recognize his sister’s number when she called him makes him want to go. That and for their parents.

Teresa tells her husband about how she’s in a better place with Rosie and wants the same thing with Joe. So she invited him to a retreat. Her husband doesn’t see the point of it but Teresa is really excited about it.

Melissa is at lunch with her friends including her BFF Jan. She tells them about her new book deal. But when she mentions how it’s about her happy marriage; her friends seem stumped. Then she tells them how Teresa texted her congratulations. Melissa believes something must be wrong with her sister-in-law and she and her friends can’t help cackling over the about face.

Jacqueline and Kathy are out shopping when Teresa calls Kathy about the retreat. Kathy puts her on speaker phone. In doing that Jacqueline heard Teresa blame her for her further estrangement with her brother. Jacqueline grabs the phone and begins arguing with Teresa. Jacqueline begins looking crazy in the crowded store as anyone seeing the other customers can tell. Kathy gets her phone back but really the damage has been done.

Teresa is out with her friends when the old rumor about Melissa’s affair comes up. Melissa’s friend Jan was the one to tell everyone about it. Teresa doesn’t want to discuss the rumor though. She feels that its just a rumor and she had talked to Melissa about it years ago so why bring it up now. She doesn’t want to restart the drama.

Kathy and Melissa both take their husbands to strip workshop. Melissa just happens to be really good during her striptease. Kathy and Rich not so much. But Rich does mention he’s fantasized about Melissa in a similar position.

Caroline is out to dinner with her husband and she mentions having a romantic getaway. Her suggestion is Hoboken. Her husband isn’t too thrilled her idea of a getaway is less than 10 miles away. Still, she really wants to do it because she doesn’t want to wake one day and either he’s gone or he left.

Melissa is hosting a brunch. Jacqueline is there and she apologized to Kathy about her own reactions. But then she starts getting worked up; luckily someone opens some alcohol. There is some questions about this upcoming retreat. Melissa is skeptical about although Rosie is doing her best to amp everyone up.

Teresa’s friend and a potential realtor calls and invite Melissa out to lunch. Jennifer however tells Melissa about what her friend was saying about her when they were out with Teresa. She tells Melissa Teresa didn’t say anything but Melissa feels that Teresa should have defended her.

Later Melissa is out to dinner with on a triple date. She doesn’t mention how Teresa wasn’t apart of anything so Joe is upset his sister is still at it. That’s when they notice that Teresa’s friend is also there. Jacqueline is acting out weirdly and Kathy can see that and now firmly believes Jax needs to talk to Teresa are go to an asylum. Kim D keeps trying to tell everyone that Melissa’s friend was the one that brought it all up. Melissa now wants to turn the retreat into an intervention.

Jennifer, the realtor, then tells Teresa that she told Melissa about everything that happened. Teresa is pissed but as long as her brother Melissa know it wasn’t her fault everything could still work at the retreat.

Teresa will be disappointed and it’s all because of Jennifer trying to sell a house.