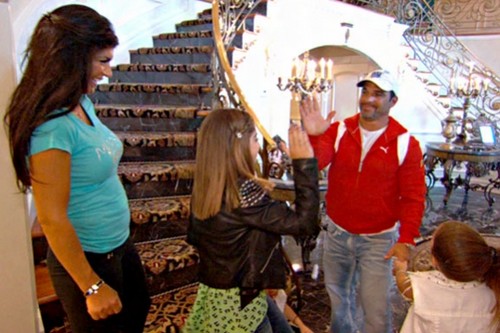 Tonight on BRAVO our favorite Housewife show THE REAL HOUSEWIVES OF NEW JERSEY returns with and all new episode called, “Children of the Scorned.”  On tonight’s show Joe makes up for lost time with his goddaughter, Gia, but an unexpected comment leaves him speechless. To get caught up for tonight’s crazy episode if you missed last’s week, you can read our full and detailed recap, right here.

On last week’s show Teresa reluctantly reached out to Jacqueline for a sit-down, bringing them face-to-face for the first time since their ‘friendship divorce’ over a year ago, but things quickly deraiedl at the mention of marital infidelity. Caroline worried about her children’s needs, but it’s her husband that made a shocking demand. Melissa and Joe got a hot offer one of them couldn’t refuse, while Kathy spiced up her sister Rosie’s love life.

On tonight’s show With the adults’ relationships on the mend, Joe makes up for lost time with his goddaughter, Gia, but an unexpected comment leaves him speechless. Old grudges die hard when Teresa hosts a charity event and confronts Jacqueline about an unresolved comment threatening their fragile reconciliation. Meanwhile, Jacqueline makes an impulsive decision that fills her husband Chris, sister-in-law, Caroline, and daughter Ashlee with worry, but at least she has Kathy on her side!

Tonight’s episode is going to be filled with more crazy Housewife drama that you won’t want to miss, so be sure to tune in for our live coverage of the show tonight at 8 PM EST! While you wait for our recap hit the comments and let us know how excited you are about the new season of The Real Housewives of New Jersey! Also we have a sneak peek video of tonight’s season 5 episode 11 below!

The show begins with Teresa and Jacqueline still at dinner hashing things out. Teresa feels Jacqueline is holding back. Jacqueline admits that she is upset that Teresa told her family that instead of being on Twitter Jacqueline should be with her son. She breaks down as they talk.

Meanwhile Joe and Chris also talk about Chris’ son and what is going on with him. Chris shares it is a lot of work and patience.

Back to Teresa and Jacqueline, who are now telling each other how much they cherish each other. Teresa swears that she loves Jacqueline and would never do anything to hurt her or her family. Jacqueline wants to know where they go from here. They agree to be civil with each other and basically leave each other alone. They head to meet their husbands at the bar and the foursome has a peaceful drink. Although Teresa reminds Jacqueline to stop spreading cheating rumors about her husband.

The next day at BLK Albie, Christopher and Chris talk at BLK about Chris’s talk with Joe. The retreat is brought up too. Then they get down to business about the BLK. Chris tells them that BLK has to be main priority over Little Town.

Gia gets ready to spend some time with her Uncle Joe. Her friend is there too and Teresa listens in on their conversation about what Joe has planned for the day. Gia is happy to be spending time with her uncle.

Joe arrives to pick up Gia and talks with Teresa. He is excited to be hanging out with Gia again. He is said that he doesn’t really know her anymore. The two head to a go-cart race-track. At the track the two have a great time racing go-carts then have a chat as they get some food. She brings up how different it is now then when she was little in terms of their relationship. She tells him how his fight with her mom affected all the kids. Joe tells her things happened but he never imagined it would be that way. Gia tells it upset her when her mom was upset. Joe tries to tell her there are two sides to every story. Gia brings up the christening to Joe. He says they were all wrong and things happen. Basically Gia lets him know that she knows what was going on and it affected her, especially when kids said stuff at school to her about him. In the end he tells her they had a nice day and they should come back with all the kids. He also tells her to call him if she ever needs him.

It is the day of Teresa’s Zumba charity event. Rosie, Melissa, Joe, Kathy, Rich, Jacqueline and Chris all arrive with their kids to take a bus to the event. They all realize how the adults fighting has taken a toll on the kids and what they have missed out on with the kids growing up. On the bus Teresa tells Jacqueline on the bus she is happy she is there. Then Teresa brings up the comment that Jacqueline made calling her a sociopath. She doesn’t know what it means so she Googles it. They quickly move past and begin to joke around with each other.

Finally they all arrive at the event and begin to Zumba. Teresa and Jacqueline take time to chat during the event. They even hug but Jacqueline is still a little conflicted about whether or not she can trust Teresa.

It is time for Greg’s good-bye party. Caroline waxes poetically about him really and tears up as she gives speech. She gives a present. Everyone is at the party except Teresa and Joe. Caroline is shocked to find out that Jacqueline is leaving for California for surgery. That topic of conversation quickly turns to that but Chris turns it back to Greg.

Jacqueline arrives in Beverly Hills to meet with a doctor. Her friend Jill and daughter Ashlee are both by her side. Her parents end up coming there as well and she has dinner with them all. Despite her doctors orders Jacqueline does some shots. Ashlee is concerned about her mother. The dinner talk turns to the surgery and Jacqueline’s dad and daughter are not too supportive. They are worried about the surgery.

Back in New Jersey CJ gets sick. Caroline comes over to help, she thinks he may have strep throat.

The surgery day has arrived. Ashlee and her grandparent’s are in the waiting room talking about the risks. Chris calls for an update and learns that the surgery is taking longer than expected. The doctor comes out and all went well and takes them back to see her. Ashlee calls Chris to let her know Jacqueline is fine.