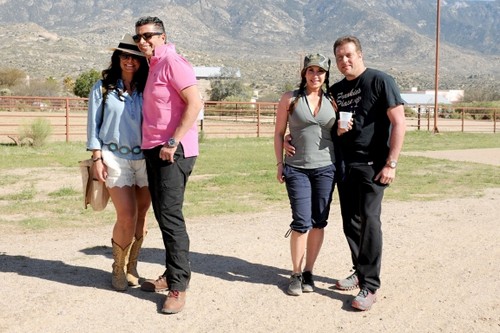 Tonight on BRAVO our favorite Housewife show THE REAL HOUSEWIVES OF NEW JERSEY returns with and all new episode called, “Spaghetti Western & Meatballs.”  On tonight’s show the Housewives jet off to the zen Arizona desert to celebrate Melissa’s birthday. To get caught up for tonight’s crazy episode if you missed last’s week, you can read our full and detailed recap, right here.

On last week’s show suspicion was in the air when a scandalous article about Melissa’s marriage rocked New Jersey and Teresa’s hair product launch put Melissa face to face with a gossip-mongering ex-friend. As Jacqueline celebrated her return from LA (and her new tummy), an encounter with Caroline left Kathy questioning her partnership with Rich.

On tonight’s show there’s no taking the Jersey out of this crew as the Housewives jet off to the zen Arizona desert to celebrate Melissa’s birthday. But mounting doubts force Joe to rethink including his sister, Teresa, on the trip. As Jacqueline faces a major hurdle in mending her relationship with Teresa, Caroline struggles to get her husband, Albert, to relax. And Kathy receives a long-awaited message from another realm.

Tonight’s episode is going to be filled with more crazy Housewife drama that you won’t want to miss, so be sure to tune in for our live coverage of the show tonight at 8 PM EST! While you wait for our recap hit the comments and let us know how excited you are about the new season of The Real Housewives of New Jersey! Also we have a sneak peek video of tonight’s season 5 episode 13 below!

The show begins with Teresa giving a cooking class. Kathy shows up to give her support. The two talk about Teresa’s event the night before. Teresa lets Kathy know that Jan showed as well as Penny both of whom have been talking about Melissa. Teresa reveals that Penny and Melissa ended up talking and by the end of it all Melissa was able to see Teresa was not involved in the bad mouthing of Melissa.

Melissa and Joe pack for the trip to Arizona. Melissa hopes to turn her trust around in Teresa. Joe reveals he is ok hanging out with Joe but he feels Teresa has some involvement with Penny and the rumors.

Kathy and Rich are also packing for the trip with their kids Joseph and Victoria. Rich shares he only wants to hang out with Kathy on the trip.

Caroline and Albert talk about the trip as they get ready to leave. They are worried about all the drama that can come from the group trip.

Teresa shows Gia all the bathing suits she is going to take to Arizona. Gia orders her to get rid of a couple of them and takes some away from her.

Jacqueline and Chris say good-bye to their kids as they pack. She wonders if she can wear heels yet. He tells her that it will be casual so she doesn’t need to. The talk of course turns to Jacqueline and Teresa and whether or not she can trust her and should be friends with her again. Chris tells her to put her best foot forward and hope for the same in return.

Caroline, Jacqueline, Albert and Chris’ plane gets delayed while all the others head out on time. Caroline becomes annoyed when Jacqueline starts acting like a brat because of the delay.

Once they arrive in Arizona Melissa starts to feel sick. The loud group is a little much for the meditation resort. Rich gets annoyed when he is told to be quiet. Finally the rest of the group arrives. The guide shows them their amazing Villa’s. Teresa freaks out when a spider is on her pans. Melissa is still sick. Kathy gets annoyed at Rich’s negativity towards being at the resort.

The resort is a total nature place and all the couples are a little nervous about it. Rich is pissed his room is not as nice as Joe, Melissa, Teresa and Joe’s are. He then mocks Melissa for having camel tow.

Caroline and Albert settle in but she tells him that he needs to turn off his phone. She is worried about a coyote coming up to their room.

Chris and Jacqueline check out their room and are pleased with the quiet zen of the place.

As the whole crew gets together in Joe and Melissa’s villa a bat joins the party. Thankfully Albert gets rid of it. The girls gather together for a group photo. Melissa tells the group there will be an energy healer at the resort that evening. They start talking about psychic’s and mediums when Tina, the energy healer shows up courtesy of the resort. She explains that she works as a medium and hears voices of people that are dead but not dead.

Jacqueline seems to be the only one interested. The session starts off weak as Tina says she is getting vibes from people with J and M, neither of which pan out from anyone in the group. However Tina hits a note when she talks about forgiving and asks about the issue with Melissa and Teresa. Tina says she is getting a message that blood is thicker than water for those two. Rich gets emotional when Tina brings up his father and watching a wedding video. He breaks down when she tells him that his father is proud of him. Kathy loses it when Tina mentions her father and the pain he had when he was sick. Tina tells Kathy her father is fine and dancing and that he hears her talking to him all the time. In the end the group was very affected by the energy healer.

Once Tina leaves the gang starts to have fun beginning with playing pranks on a sleeping Albert. Melissa continues to not feel good. Teresa and Kathy discuss the medium and the affect she had on Kathy. Then Kathy shares a story about her and her father and a time when she was looking for some kind of moment with her father and didn’t happen. He didn’t say “I Love You” a lot and the medium revealing that her dad said he knows he hurt her. Kathy then gives Teresa advice on her dad being in the hospital and letting him see that her relationship with her brother is good.

The next day Melissa wakes up feeling terrible. She struggles to get some pills down and has to stay back while he others go hiking. Before he leaves he talks to Melissa about whether or not she believes Teresa? Melissa says there is no proof and just wants it all to stop.

Connor the hike guide gives the group a pep talk about being one with nature before it begins. He tells them to stay on the trail. Back at the villa Melissa rests while laying out in the sun.

The hike ends with cleansing and purifying ceremony. Everyone must write down what they are letting go of on a piece of paper and then burn it. She sages around them because it is purifying and cleansing but Rich is not into it. When asked who would like to go first Albert said he is not going to participate. Caroline begins and she burns worry, which is wrote down for Albert who she feels needs to not worry what people think so much. Joe goes next and he lets go of anger and hate. Kathy is next and released putting everyone else’s needs before hers.

Jacqueline goes next and is letting go of ill feelings. Teresa goes next and gets very emotional. She calls her brother, Jacqueline, Caroline, Rich, Chris and Kathy to come up with her. She shares she is a good place with all these people and wants to keep it that way. She lists of things like love, joy, happiness and reuniting. It was her way of letting the past go and it has an affect on everyone. Teresa and Jacqueline take a walk alone and Jacqueline tells her that she missed her. Teresa makes a comment about karma comes back to you but if it doesn’t come back to you it will your kids. Jacqueline is perplexed about the comment and it does not sit well with her.