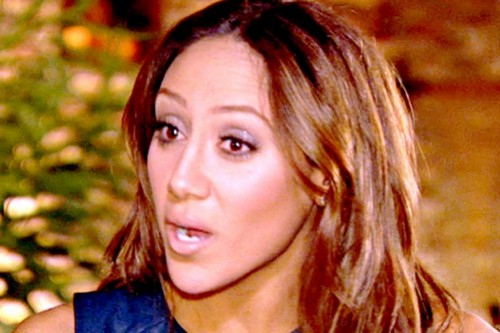 Tonight on BRAVO our favorite Housewife show THE REAL HOUSEWIVES OF NEW JERSEY returns with and all new episode called, “The Blonde Drops a Bombshell.”  On tonight’s show when a gossip queen resurfaces with an unsettling secret, the Gorga-Giudice pact is put to the test. To get caught up for tonight’s crazy episode if you missed last’s week, you can read our full and detailed recap, right here.

On last week’s show the Housewives are on shaky ground during their final day in the Arizona desert as a high-wire course 30 feet in the air proved to be the ultimate trust test between sister-in-laws Teresa and Melissa. As alliances grew stronger between Teresa and Jacqueline, tensions between Teresa and her brother Joe boiled over, forcing Caroline and Kathy to intervene during a heated showdown.

On tonight’s show Jacqueline and Teresa’s relationship takes a surprising turn as Jacqueline faces her paralyzing fear of public speaking. While Caroline weighs the pros and cons of selling her family home, Kathy’s cannolis score a sweet promotion and Melissa’s singing career attracts a new audience. But when a gossip queen resurfaces with an unsettling secret, the Gorga-Giudice pact is put to the test.

Tonight’s episode is going to be filled with more crazy Housewife drama that you won’t want to miss, so be sure to tune in for our live coverage of the show tonight at 8 PM EST! While you wait for our recap hit the comments and let us know how excited you are about the new season of The Real Housewives of New Jersey! Also we have a sneak peek video of tonight’s season 5 episode 16 below!

I almost feel compelled to ask if anyone really is watching this season of The Real Housewives of New Jersey because it suddenly feels very stale, like it has overstayed its welcome. Anyway , Jacqueline has decided to become more active in Autism Awareness but hates that every good thing that she does is met with a level of criticism. Her husband wonders why people have such a hard time believing that they just want to do something positive without an ulterior motive.

It’s also the first time in four years that Joe, Melissa, Teresa and Joe sat down to lunch with the Gorga’s mother. It’s a huge deal and they are hoping that it shows their mother that they are working on their relationship and being a family. Meanwhile Teresa is also on board to help Jacqueline write a speech about autism. At least these two are actually bonding over something again.

Oh boy, Melissa and her husband meet with a big time music producer because she still wants to pursue her dream of singing. This guy worked with Justin Timberlake and Melissa actually told him that he should hear her sing in her car. He is skeptical at best.

Kathy is a nervous excited wreck. She is selling cannolis at Dylan’s Candy Bar which is owned by Calvin Klein’s daughter. If she does well it could mean huge business for her down the road and it seems that Murphy’s Law is at work. Meanwhile Melissa has invited the heavy duty producer into her home and she absolutely ruins the new song they give her. It is strongly suggested that Melissa fly to Orlando to be surrounded by a team of people to help prop her up. I’m not sure that Melissa is going to do this.

Kathy is making cannoli’s at the candy bar and she’s lucky to have lots of foot traffic but her family turn out is light. I think Kathy wanted them all there the whole time and in the end Teresa, Melissa, Jacqueline and their families all showed up. Caroline was MIA do to an obviously hellish migraine.

Jacqueline is still struggling with speaking at a basketball even to promote autism awareness. She is terrified to share her story and be judged for it. She finally takes the mic and tearfully begins to tell her story about Nicholas. She gets through it and her husband believes that Jacqueline simply being a mother going through the journey will make people connect with her.

Melissa and Joe head out to dinner to discuss her music career when they happen to notice Penny also in the restaurant. She is one of Teresa’s friends that is connected to the whole strippergate  thing. They decide to corner her looking for answers because Joe believes that Teresa was involved. Penny puts the blame on Teresa. She says she’s not going to take the bullet for Teresa. Tune in next week for more RHONJ.